Laird was the only winner among MTSU’s nine alumni nominated for their work on pop, rap, Americana, gospel and country albums, but their efforts still earned plenty of praise plus a pre-ceremony feature on NBC Nightly News.

Laird, a 2001 Department of Recording Industry grad, won with Musgraves and Shane McAnally for “Space Cowboy,” the second single off Musgraves’ acclaimed “Golden Hour” CD. It won not only the best country album Grammy but also walked away with the all-genres album of the year award. 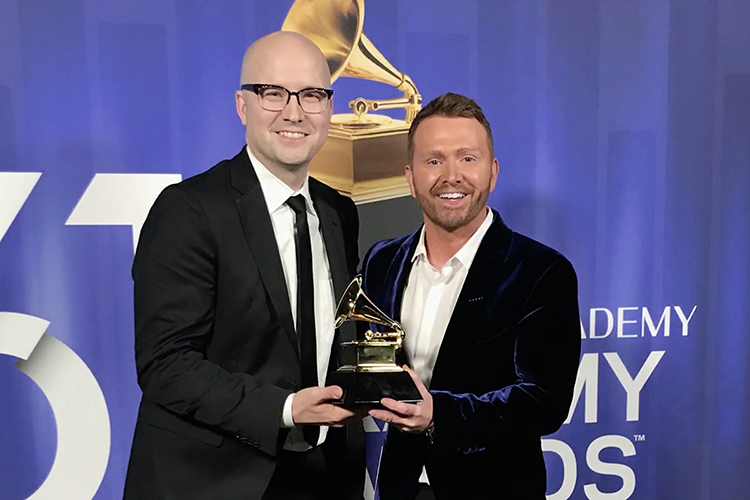 “This is really unbelievable,” Laird said while accepting the award at the Staples Center in Los Angeles, choking back tears and smiling as he thanked his wife, his co-writers and his colleagues at Creative Nation, his music publishing and management company.

“It’s an honor for someone like me to get to work with the most talented people in the world, and I feel truly blessed to have the opportunity every day to be creative for a living.”

While at MTSU, she interviewed both Laird and Chambers, a Memphis native who earned his bachelor’s degree Dec. 15 and produced rap superstar Travis Scott’s No. 1 track, “SICKO MODE” with Drake, Big Hawk and Swae Lee.

The now double-platinum song was nominated for the best rap performance and best rap song Grammys and is part of Scott’s also-nominated No. 1 “Astroworld” album but lost to competitors Kendrick Lamar, Anderson Paak, Drake and Cardi B, respectively, Sunday night. 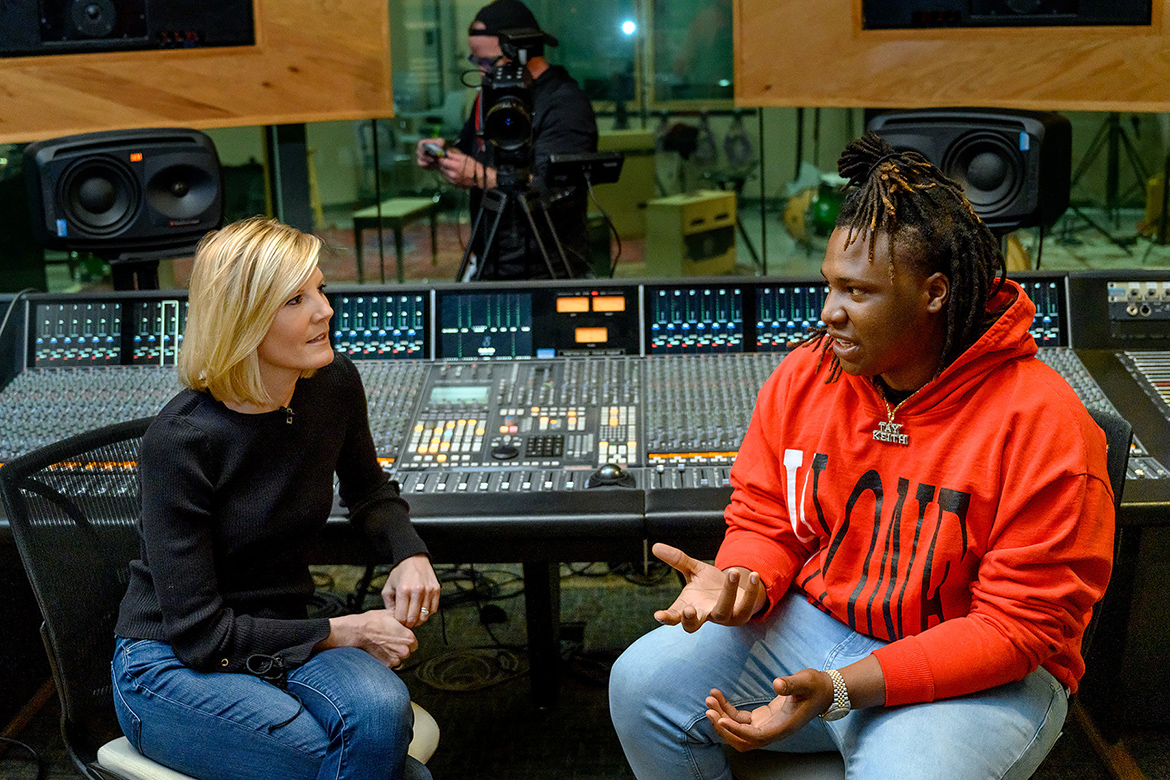 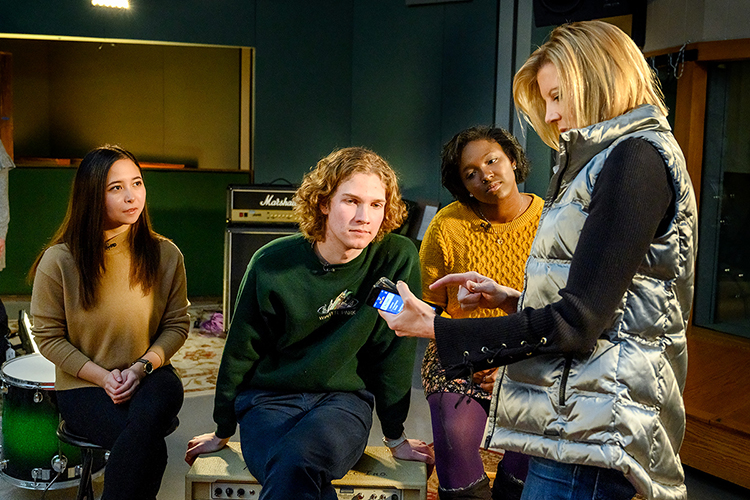 NBC Nightly News Sunday anchor Kate Snow shows MTSU recording industry students some of the video shot of their conversation in late January in one of the recording studios in the Bragg Media and Entertainment Building. From left are seniors Trianne Newbrey and Austin Sawyer, junior Micaela Griffin, and Snow. The story aired Feb. 10 before the 61st Annual Grammy Awards telecast. (MTSU photo by J. Intintoli)

Snow, who also visited Nashville’s Bluebird Café for a Writers in the Round performance with Laird and three of his songwriting colleagues, talked with recording industry students at MTSU, pointedly asking them, “How many of you will graduate with no debt?”

All three of the students — seniors Trianne Newbrey and Austin Sawyer, and junior Micaela Griffin — raised their hands, smiling.

Chambers told Snow during his NBC interview that he particularly appreciated learning about the business end of the music business at MTSU and how to negotiate his producing deals “so they won’t try to pull no funny moves on me, try to screw me over,” he said with a chuckle.

You can watch a feature on the program below.

MTSU President Sidney A. McPhee said this year’s MTSU Grammy trip, the sixth in a row for the university, was the most successful, drawing many alumni and industry officials together and allowing students to see behind the scenes of “music’s biggest night.”

The university sponsored a series of industry get-togethers during the long Grammy weekend, winding up on Sunday night with a co-sponsored reception for Nashville’s Leadership Music members at the Rock ‘n’ Fish restaurant next door to the Staples Center. 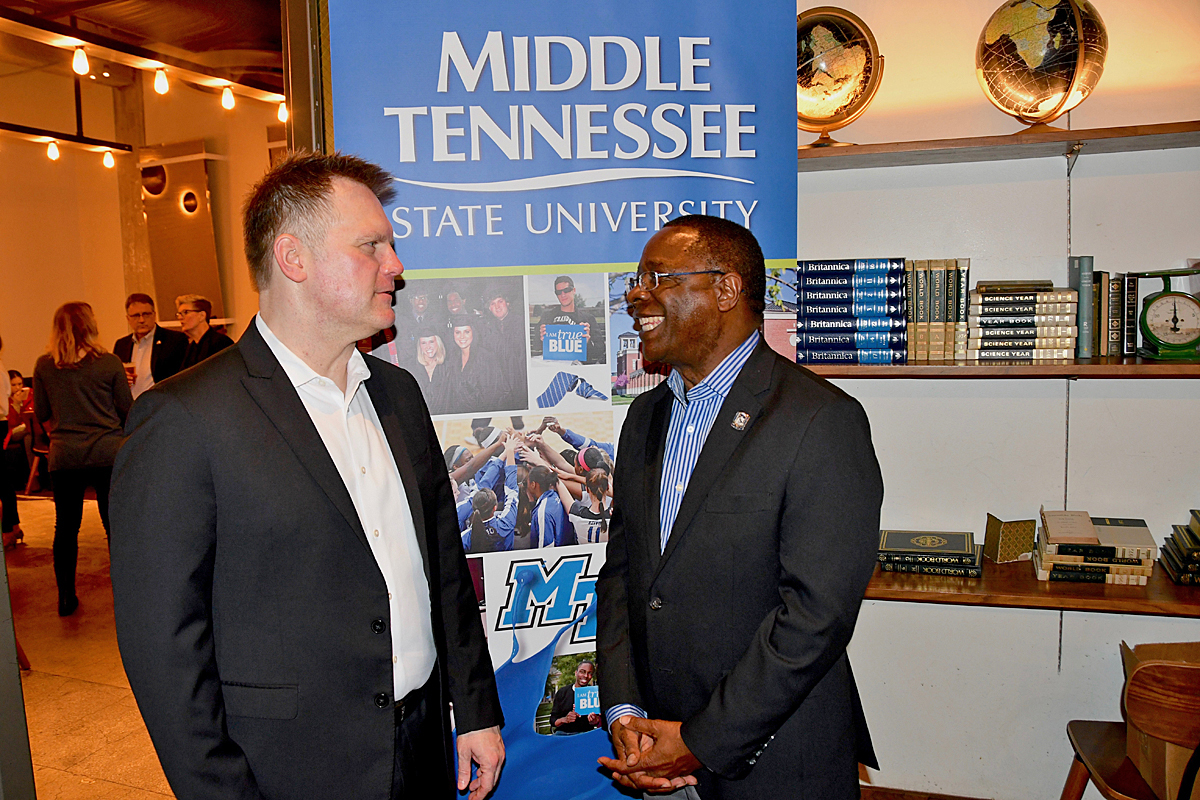 Six MTSU recording industry students, who were selected by chair Beverly Keel to represent the university, went both backstage and on stage Friday as the Recording Academy prepared Staples Center to host Sunday’s national telecast.

The students, along with professor Matthew O’Brien, also met with Billboard magazine’s west coast editor, Melinda Newman, and A&R executive Jay Landers, who has worked with a stable of renowned artists that includes Barbra Streisand, Frank Sinatra and Bette Midler.

“We’re always proud of the work of all our students, faculty and alumni at MTSU,” McPhee said, “and our Department of Recording Industry in the College of Media and Entertainment consistently tops the lists of internationally recognized music business schools because of the outstanding work of alumni like these Grammy nominees and winners.

“Having all our students ready to work when they leave our campus is our goal. Having them be recognized and rewarded for that work makes us unbelievably proud.” 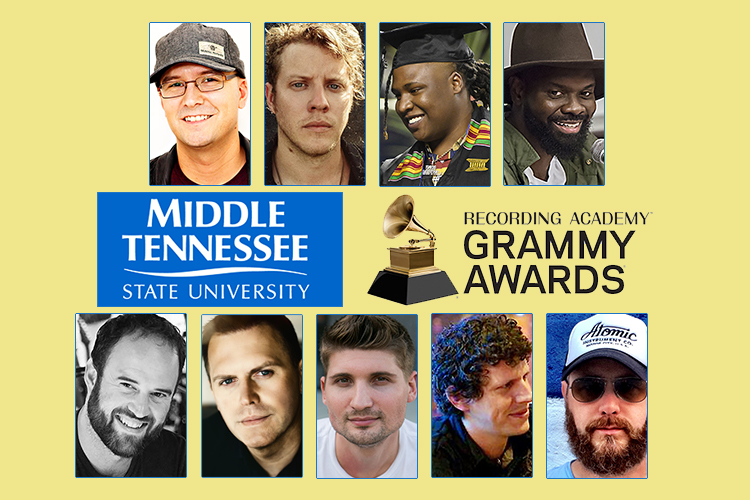 Only artists, songwriters and lead producers and engineers get public credit for most Grammys, but industry folks — and music lovers who study the details of their favorite tracks — know who else makes the music pop. MTSU’s alumni nominees’ work this year included:

You can learn more about the nominees and their work here.

MTSU alumni, former or current students, and faculty from across the university have been a part of more than 60 Grammy Award nominations in the last decade alone. Now, with Laird’s win, nine have won a total of 26 Grammys since 2001, including six repeat recipients, in categories from classical to country to gospel to rock.

You can read more about MTSU’s 2019 Grammy adventures here.