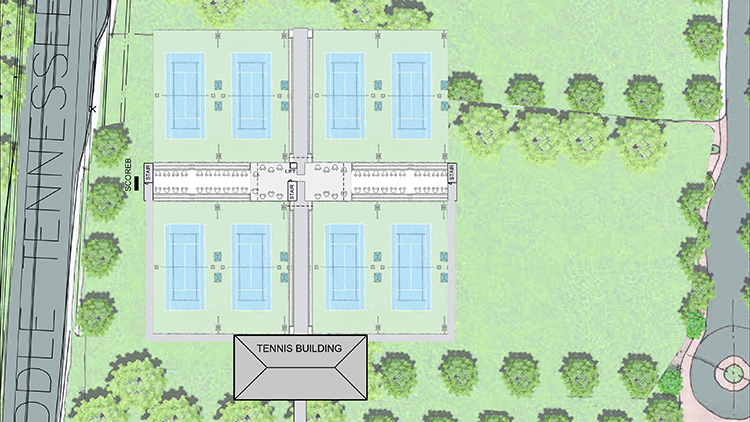 This architectural drawing shows plans for a new $4.8 million outdoor tennis complex for the MTSU campus recently approved by the Tennessee State Building Commission. The project, funded by gifts from former players, the local tennis community and funds set aside from the Middle Tennessee Boulevard road improvement project, should be ready by 2023. (Courtesy of MTSU Athletics)

The project, funded by gifts from former players, the local tennis community and funds set aside from the Middle Tennessee Boulevard road improvement project, should be ready by 2023. The Tennessee State Building Commission approved the project earlier this month and an architectural designer will be announced for the job on Aug. 23.

“We appreciate our players and supporters stepping forward to create a true competitive advantage for our tennis teams and further enhance our campus,” said MTSU President Sidney A. McPhee.

“When combined with the previous investments by the University and community in the Adams Tennis Complex, this project will make the facilities used by MTSU among the best in the region.”

The complex, located on the site of the existing Buck Bouldin Tennis Courts at the corner of Middle Tennessee Boulevard and Greenland Drive, will include eight competition courts with viewing stands. Preliminary plans also include coaches’ offices and team locker rooms to be housed in a dedicated tennis building.

“We are excited about the tennis project moving forward. This approval allows us to move forward with the design phase to further enhance our tennis complex,” MTSU Director of Athletics Chris Massaro said.

Massaro said the complex “comes on the heels of improvements to the school’s softball and golf facilities, continuing Middle Tennessee’s commitment to improving our facilities. This complex will enhance the vision for improvements in our athletic village area including a new Student Athlete Performance Center and improvements to Floyd Stadium, Murphy Center.”