‘MTSU On the Record’ studies m.. 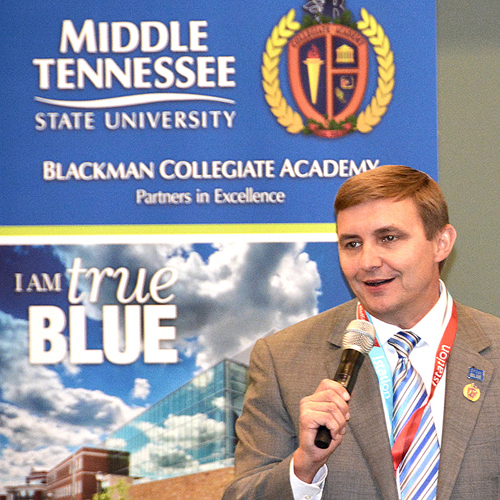 NASHVILLE, Tenn. — The partnership between Blackman High School in Murfreesboro and Middle Tennessee State University in the creation of the Blackman Collegiate Academy was highlighted Monday, Oct. 24, at the 2016 LEAD Conference sponsored by the Tennessee Department of Education.

MTSU President Sidney A. McPhee and Dr. Deb Sells, vice president for student affairs, joined Blackman Principal Leisa Justus and Academy Dean Ken Reed and others from both institutions to present at the conference, which allowed secondary and postsecondary administrators from across Tennessee to share ideas and best practices.

Dr. Deb Sells, at left with microphone, vice president for student affairs at Middle Tennessee State University, speaks Monday, Oct. 24, during the 2016 LEAD Conference at the Music City Center in Nashville, Tenn. Sells discussed the partnership between Blackman High School in Murfreesboro and MTSU in the creation of the Blackman Collegiate Academy. (MTSU photo by Andrew Oppmann)

MTSU was a founding partner in Blackman High School’s new Collegiate Academy when it was formed in January 2015. The academy offers college-level courses on the Blackman campus, and MTSU has assisted in developing its academic enrichment programs.

“Our partnership with Blackman has allowed many of its best students to take a closer look at MTSU as a college choice,” McPhee said. “Our university was able to bring many of its resources to the table to accomplish the goals of the academy.”

Sells said MTSU saw a year-over-year increase of 13 percent in Blackman student enrollment after the first year of the partnership.

“Blackman is MTSU’s No. 1 partner in dual-enrollment learning,” Sells said. “Not only are we welcoming more Blackman students, but many of them also have higher ACT scores and GPAs.”

Justus told educators about how the academy has allowed the high school to build upon what it calls “the Blackman experience.”

“Even as high schools, we are in a competitive environment to enroll and retain high-achieving students,” she said. “The academy allows these students the choice to stay at their home (zoned) school rather than seeking enrichment opportunities elsewhere.”

Held at the Music City Center, the 2016 LEAD Conference continues through Wednesday.