In The News: MTSU featured on .. 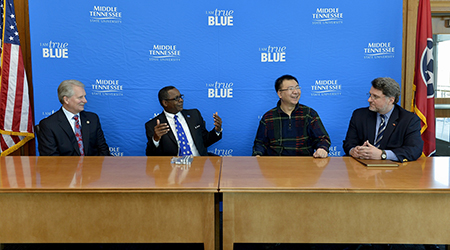 “We’re now in a position to provide training expertise and the support they will need,” said MTSU President Sidney A. McPhee, referring to the Chinese civil aviation authority.

“We are ready to go with this initiative. One of our goals is partnerships with business and industry. The aviation industry in China is about to explode. FedEx and UPS are just waiting for this.”

“Today, the success is realized,” Vaughn said, noting that the pact began two years ago when MTSU held a general aviation conference with Beihang University, one of China’s leading aeronautics institions, at MTSU’s Flight Education Center at Murfreesboro Municipal Airport.

“Since then, our business has grown,” Vaughn continued. “We are comfortable doing business with China as Tennesseans. Trade is part of our heritage, and we are proud to represent our state through commerce. Today is a milestone for us, and we look forward to more sales and visits from China in the future.”

The King Air 350 Extended Range aircraft will be used by China for geophysical and geochemical exploration in the Tibetan plateau. The 350ER has an extended flight range because of its larger fuel caapcity. (photo courtesy of Mike Vaughn)

The Beechcraft King Air 350ER will be based in Qinghai, located in the foothills of the Tibetan Plateau. The airplane will fly with a rear-tail, boom-mounted magnetometer used for geophysical and geochemical exploration in the plateau. Valued at more than $10 million, the U.S. export deal was arranged by PacUS LLC and its Hong Kong affiliate, CFM China Ltd.

Vaughn added that wheels will be turning in all the application processes “in the next 30 days or so.”

Chinese team leader Renhao Zhang, who spoke through interpreter and MTSU aerospace graduate student Jenny Wei, said he “is excited to be here for the acceptance of the aircraft” and “glad to see the cooperation” between all parties.

Wei, who interns for both Corporate Flight Management and PacUS, plans to graduate in May.

Zhang represented the Northeast Division of the CAAC, which is  the equivalent of the U.S. Federal Aviation Administration. He was joined by two CAAC Northeast Division associates, Bo Liang and Bin Yang, and Guowei Wang of China Flying Dragon during the agreement announcement and their weeklong visit to Middle Tennessee.

Ketron, who represented Gov. Bill Haslam, said the alliance means “the opening of doors and creation of jobs — helping the economy.”

Dr. Ron Ferrara, interim chair of MTSU’s Department of Aerospace, said the agreement will help students benefit from “more exposure to international students, and it might open opportunities for them overseas.”

The airplane is housed at Corporate Flight Management’s hangar at the Smyrna Airport. Commercial Aircraft Corporation of China also is interested in purchasing maintenance services in Tennessee, officials said.

The plane, which is the first of its type to be used in China, will be delivered to the city of Harbin for the Aero Geophysical Survey and Remote Sensing Center for Land and Resources, a division of China’s Ministry of Natural Resources. Company officials are in Rutherford County for the final on-site inspection before the plane is shipped to China.