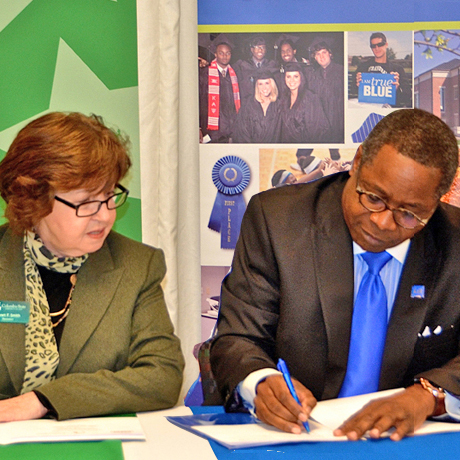 LEWISBURG, Tenn. — An agreement signed Thursday, Feb. 27, between Middle Tennessee State University and Columbia State will allow community college students to earn a bachelor’s degree in agribusiness without ever having to leave Marshall County.

The Agribusiness Program 2+2 Agreement — two years at the community college and two at a university — will begin this fall and help ease the transfer of Columbia State students to MTSU. Students can move from an associate degree to an MTSU Bachelor of Science degree at Columbia State’s Lewisburg campus.

Approved by the Tennessee Board of Regents, the program targets students who want to grow and expand their current agricultural operation, open a new agribusiness or venture into a new learning experience, which could open employment opportunities locally, nationally and abroad.

Faculty, administrators and staff from both TBR institutions joined MTSU President Sidney A. McPhee and Columbia State President Janet F. Smith at the ceremony to formally sign the pact.

McPhee noted that the agreement supports Gov. Bill Haslam’s “Drive to 55” initiative. In December, Haslam announced a plan to bring the percentage of Tennesseans with college degrees or certifications to 55 percent by 2025. Tennessee ranks 43rd in the nation in working adults with a two-year degree or higher.

McPhee said the agribusiness agreement “will provide easy access and leveraging for students. We want to educate Tennesseans with degrees with less cost and add to the workforce in the major areas of the governor’s priority.”

Smith, who grew up on a farm, said agriculture is an important program at Columbia State.

“This (2+2) program provides our students and community with additional educational opportunities that enhances their ability to be an ag business person they desire to be, and live at home and to continue to work in their business,” Smith said.

MTSU School of Agribusiness and Agriscience Director Warren Gill also pointed the “Governor’s Rural Challenge” which, among other things, links the “Drive to 55” with agriculture, based on the importance of agriculture to Tennessee and the need for more people with advanced agriculture training.

“In Marshall and surrounding counties,” Gill added, “we’re going to be bringing an improvement in educational opportunities that will lead to careers to help peoples’ lives in the agriculture industry and improve agriculture in this region.”

“Our students often ask about the opportunity to complete a bachelor’s degree on our campus, as many have job and family obligations, which make traveling to universities problematic,” Lampley said. “MTSU has made it possible for these students to continue to support their families and complete their education.”

The 2+2 program will be conducted through several methods of course delivery, including videoconferencing, online, hybrid (blend of face-to-face interaction and web-based technologies) and the traditional classroom.

Marshall County Mayor Joe Liggett told officials at the event the board of directors of the Marshall County Farm Bureau voted Feb. 20 to award a $1,000 scholarship to a student from the community who will be in the Columbia State Lewisburg agribusiness program.