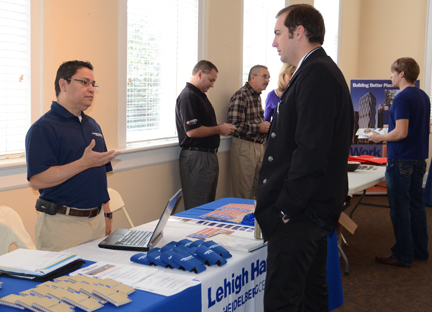 Up to 200 MTSU Concrete Industry Management majors had the opportunity to discuss future employment with representatives from 12 major companies today during a CIM Networking Event.

“This is great,” senior Jake Shaw of Murfreesboro said of the event, which was held in Cantrell Hall of the Tom H. Jackson Building, before heading off to class. “CIM is great about things like this, setting you up where you can talk to them (company reps) in a nonformal setting.”

Shaw scheduled an interview with Marvin Gomez, who was representing Lehigh Hanson, for later in the day.

“We’ve got a good group (of companies) here today and a steady flow of students,” said Dr. Heather Brown, director of CIM, which is considered one the university’s signature departments.

“The fact that 12 companies are here is gratifying, and everybody I’ve spoken to says jobs are coming back,” said Brown, who added that Mexico City-headquartered Cemex had reps on campus trying to fill six jobs in Florida, “and it’s like that all over the country.”

Brown also liked the fact that at nearly every booth, MTSU alumni were a part of the company representatives.

“I really appreciate that the companies would send our alumni to recruit our current students. The two coolest things today were the alumni returning and that jobs are out there.”

Representing Turner Construction were Drew Hauser, an estimator in preconstruction, and current MTSU student Ian Hyde, who is in his second internship with the company.

“I’ve seen it from both sides of the table,” said Hyde, a senior who is from Memphis and currently works with the project manager at the new Science Building site on campus.

Junior Charlie Paugh of Franklin, Tenn., added that he, too, “likes when CIM has these networking events.”

Concrete industry is one of 10 College of Basic and Applied Sciences’ departments.