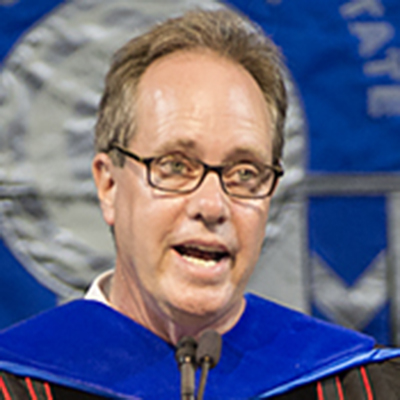 With those words, Dr. Deb Sells, vice president of student affairs, welcomed some 200 new freshman and transfer students to MTSU at the 2015 University Convocation in Murphy Center.

Guest speaker Jay Allison, editor of “This I Believe” and “This I Believe II,” shares remarks Sunday, Aug. 23, during MTSU’s 2015 Convocation ceremony at Murphy Center. (MTSU photos by Andy Heidt)

Convocation, the traditional start of the academic year, is part of the annual “Week of Welcome” celebration.

Faculty dressed in academic regalia and carrying brightly colored banners lent a ceremonial air to the festivities, similar to that of the semester-ending commencement ceremonies when graduates receive their diplomas.

Taking his cue from Allison’s theme, MTSU President Sidney A. McPhee delivered his own statement of beliefs.

“I believe in the power of learning and the importance of education,” McPhee said. “I’m proud to be part of Middle Tennessee State University. I believe … that we will excel in everything we do.”

Allison, who co-edited the book with Dan Gediman, produced the award-winning National Public Radio series on which the book and its predecessor volume are based. The modern radio series, which ran on NPR from 2005 to 2009, was a renewal of the original 1950s series by CBS News legend Edward R. Murrow.

“This I Believe II” is a compendium of personal manifestos from celebrities ranging from cellist Yo-Yo Ma and Nobel Peace Prize winner Elie Wiesel to less well-known contributors ranging from farmers to veterans.

“The world can be changed coming to know one another through our stories,” said Allison.

Calling each “This I Believe” essay a “mission statement for your life,” Allison said each person’s words had to be affirmative, not negative.

He chastised the harshness and abrasiveness of much of commercial talk radio and other media in which a complainer can remain virtually anonymous.

“The brave thing is to make yourself vulnerable, to stand up and say what you’re standing for,” Allison said. “That takes courage.”

Exhorting the students to tell the truth, Allison urged them to use their collegiate careers to “explore the beliefs that guide the lives of others, beliefs that may confirm your own, challenge them or even open your mind to something new.”

This fall begins the university’s 105th year of educating Tennessee’s best. For a complete “Week of Welcome” schedule, visit www.mtsu.edu/nsfp/welcome.php or call the Office of New Student and Family Programs, part of MTSU’s Division of Student Affairs, Enrollment and Academic Services, at 615-898-2454 for more information.