How to be professional through.. 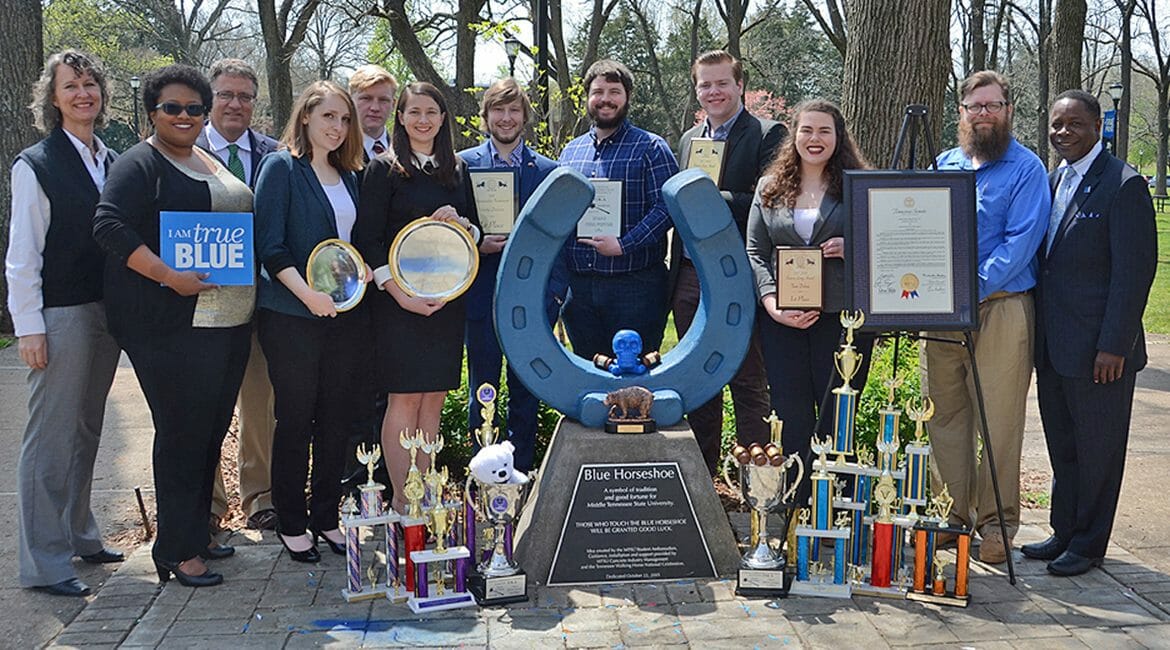 MTSU’s award-winning Blue Raider Debate Team has experienced one of the best seasons in its more than century-long history.

The team of 25 students won 148 awards over the 2017-18 season. Its accomplishments include the top national award in International Public Debate Association team competition.

“Judges can be any citizens, and debaters are encouraged to tailor their messages to multiple audiences, giving students real-world skills.”

Their work led to a total of five top national awards, a regional title and two Tennessee state titles, as well as numerous individual titles in various tournaments throughout the season.

“This past debate season has been one of the best in our team’s history, and I am so grateful that I got to be a part of that success,” said co-captain Skye Irish, a senior political science major from Rockwood, Tennessee.

“We spent innumerable hours cramped together in a tiny car and used significant amounts of our own money, but we remained steadfast in our belief in each other,” said co-captain Alex Fingeroot, a senior from Murfreesboro double majoring in political science and history. “Despite our individual successes, I’m most proud of our teamwork.”

“We have so much fun together, traveling while being able to have amazing results,” added Joshua Hendricks, a senior communication studies major from Jefferson City, Tennessee. “Dr. Richey inspires us all to be the best debaters and students we can be.”

All students in good academic standing are eligible to join the MTSU Debate Team, regardless of major. No prior experience is necessary.

“We have debaters from the far right and the far left, and they get along well,” Richey said. “The only real qualification is that a student puts in the effort.”

Time commitment varies from member to member. The team meets once per week for an hour and travels roughly four weekends a semester. Students aren’t required to travel, however.

Richey is historian of the International Public Debate Association and has a 20-year career in the practice of intercollegiate debate. The MTSU individual events coach, Natonya Listach, who serves as a judge for local tournaments, has won awards in duo interpretive, prose, persuasion and rhetorical criticism/communication analysis categories.

For more information about the MTSU Debate Team, contact Richey at 615-898-2273 or patrick.richey@mtsu.edu or visit www.mtsu.edu/debate.

MTSU Debate Team members pose with some of the group’s top national, regional and individual awards while wrapping up one of their best seasons ever in 2017-18. Shown from left are Skye Irish, a political science major from Rockwood, Tenn.; Steven Barhorst, an international relations major from Chicago; Joshua Hendricks, a communications studies major from Jefferson City, Tenn.; Alex Fingeroot, a history, political science and religious studies major from Nashville, Tenn.; Jordan Nickell, an interactive media and sociology major from Jackson, Tenn.; Katelyn Brooks, a fall 2017 graduate in anthropology and communications studies from Nashville; and Josh Tilton, an English major from Moscow, Russia. (MTSU photo by Jimmy Hart)