MTSU students get a head start.. 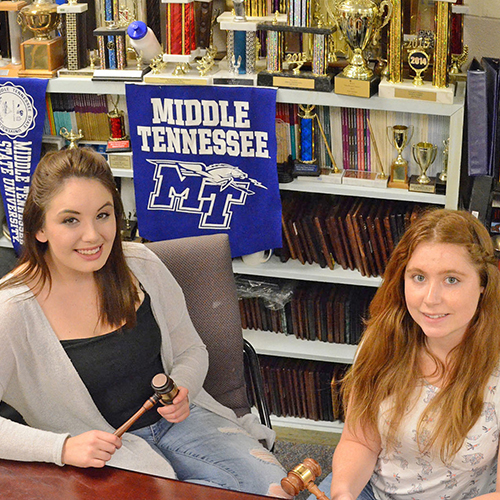 The award-winning MTSU debaters hope to conclude their best season ever on a winning note this weekend.

MTSU Debate Team Co-captain Abby Barnes, left, and freshman team member Cameron Bowker pose in front of some of the trophies the team has won in intercollegiate competition. (Photo by MTSU News and Media Relations)

Dr. Pat Richey, director of forensics and debate coach in MTSU’s Department of Communication Studies and Organizational Communication, will lead his team into Jefferson City, Tennessee, for the final tournament of the semester at Carson-Newman University Nov. 18 and 19.

They’re coming off a victorious Oct. 23-24 showing at Valdosta State University in Valdosta, Georgia, where MTSU finished first or second in most categories against bigger and better-funded schools.

“I think it was where the team came together and bonded well because the first few tournaments we had a lot of new people trying to figure out where they are in the squad,” Richey said.

“It was great to see the team come together and work not only to better themselves but other team members as well,” said co-captain Abby Barnes, a junior majoring in communication studies and English from Morristown, Tennessee.

In addition, Richey’s fellow coaches voted to give him the Coach of the Year award.

“I just do what I do,” Richey said. “I don’t think there’s anything special I do as a coach.”

What he does is prepare students, some of whom lacked high-school experience in debate, in the art of being able to prepare cogent, winning arguments on their feet and under deadline pressure.

The topics at Valdosta State included non-gendered bathrooms, climate change and whether Twitter should keep its 140-character-per-tweet limit.

“It has taught me to be much more aware of what I’m saying, what’s coming out of my mouth,” Bowker said. “I had a habit of speaking way too fast and using my hands way too much.”

For all the hardware that the team keeps collecting, Barnes said there’s much more to debating than winning.

“At the end of the day, we don’t just get trophies for the school,” she said. “We don’t just like arguing. We genuinely love each other, and we genuinely are a family.”

For more information, contact Richey at 615-898-2273 or patrick.richey@mtsu.edu or visit www.mtsu.edu/debate.