America’s response to ‘brown b..

A 2018 MTSU graduate, Gray, 29, of Lebanon, Tennessee, will begin training next month to fly for Delta as part of an accelerated program to fill a growing industry need for aviators. Gray applied early, has flown three years with Republic Airways and will be the first Propel pilot for Delta, which has partnerships with 15 aviation schools. 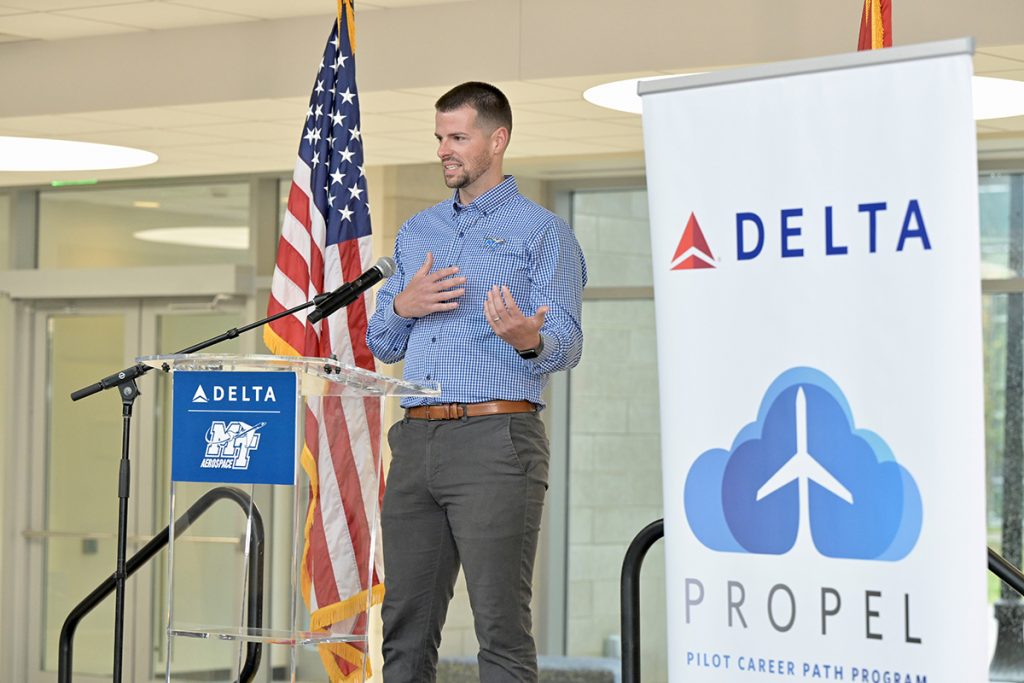 MTSU aerospace alumnus Colton Gray of Lebanon, Tenn., admits being “very humbled by the entire experience” of becoming the first graduate of the Delta Propel pilot program to accelerate (in 42 months or less) qualified aviators starting to train to be Delta Air Lines pilots. Gray spoke to a gathering of faculty, staff and students Tuesday, April 5, in the Science Building Liz and Creighton Rhea Atrium. (MTSU photo by Andy Heidt)

Four years ago, MTSU was among the first universities to enter the partnership with Delta to encourage qualified pro pilot majors to pursue a defined, accelerated path allowing candidates to earn their flight certifications, build their experience and meet all requirements to become a Delta pilot in 42 months or less.

“I’m very humbled by the entire experience,” said Gray, an Indiana native who also lived in Port Charlotte, Florida. A veteran, he served six years in the U.S. Army, was an aerospace flight instructor for two years and “always wanted to be a pilot” since age 4. “I’m even more proud to represent MTSU as the first person in the entire Delta program to complete it. It certainly adds a bit of pressure to the experience, but I hope I can make my alma mater proud.”

MTSU President Sidney A. McPhee was joined by university officials and Delta representatives for a special ceremony in the Science Building Liz and Creighton Rhea Atrium to celebrate the partnership, with Delta transporting in its massive, customized grill that resembles a small jet and feeding students with hot dogs and trimmings just off the Quad area next to the James E. Walker Library after the ceremony.

McPhee said because of Gray’s “hard work, dedication and excellent preparation by the Army and MTSU Aerospace, we are honored to say the first Delta Propel graduate is, indeed, True Blue.”

McPhee added that “being selected as a founding member of the Propel program pays tribute to our status as one of our nation’s top-tier flight-training programs. Thanks to Delta’s support and investment in our students, the Propel pilot career path has elevated our Aerospace program to an even greater level of excellence.” 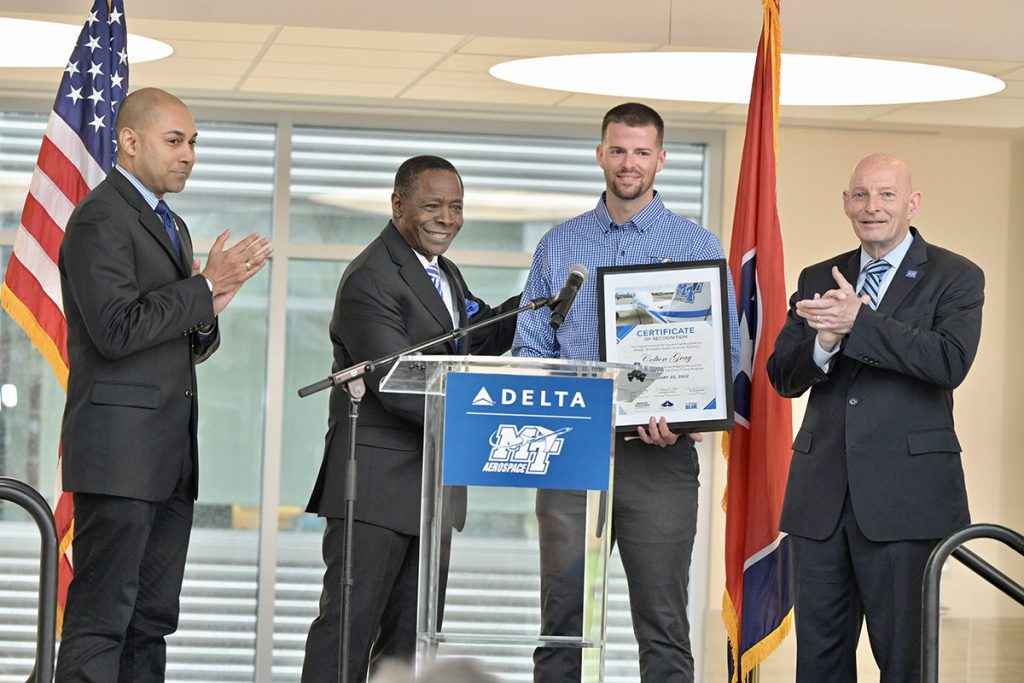 The president touched on 80 years of MTSU aviation history, with alumni flying for every major airline in the world.

Helping represent Delta, Kelvin Mason, of Atlanta, Georgia, who works with pilot outreach and development, told the honoree and the audience “Colton’s start date with Delta is May 10. He’s been waiting on that information.”

“Delta intends to hire thousands of aviation professionals in the next several years — in addition to pilots — and we are highly interested in MTSU’s ‘industry-ready’ graduates,” Mason added. “MTSU is one of the elite programs in collegiate aviation. Delta values the MTSU partnership and looks forward to growing that partnership in the years to come.”

College of Basic and Applied Sciences Dean Greg Van Patten said “the Delta visit says a lot about the strength of this partnership and the value they place on our graduates who go to work at Delta and their affiliates.

“… Delta is an exemplary, well-managed airline. They are also well known as a top corporation to work for in any industry, so we feel great about the opportunities that MTSU graduates have as a result of this partnership.” 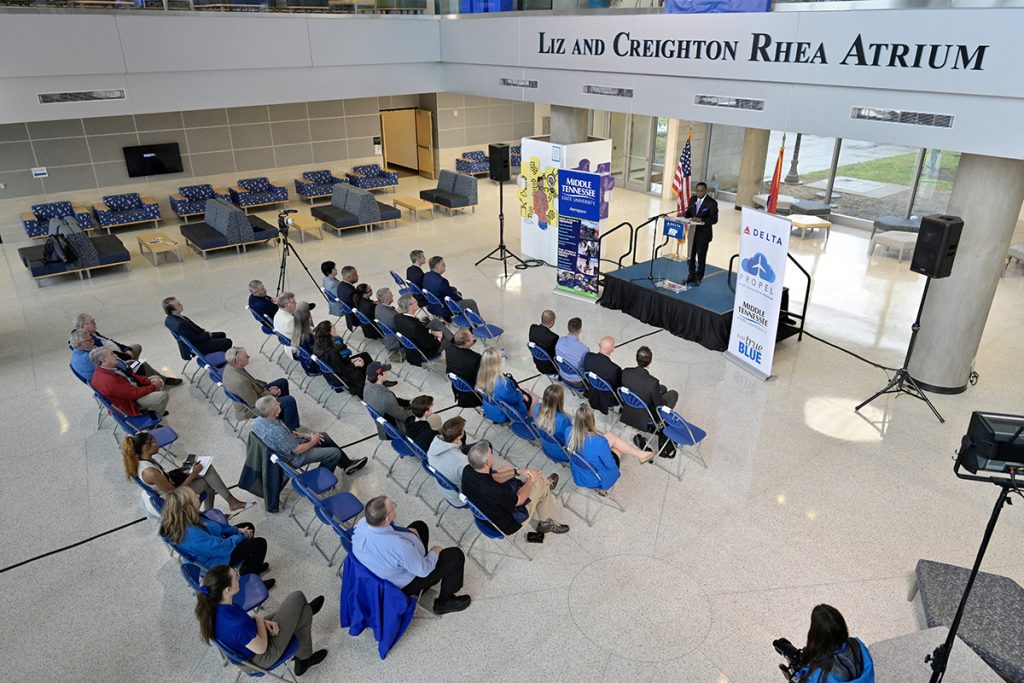 Keith M. Huber, senior adviser for veterans and leadership initiatives and retired U.S. Army lieutenant general, introduced Gray, who met his wife, Emily, while they were students. She has a communications degree from the Jones College of Business. At MTSU, Colton Gray was an SGA senator and alumnus of the Phi Kappa Tau fraternity chapter.

“I recognize and appreciate his level of intellect and skill set,” Huber said after meeting Gray and learning of his involvement with air traffic control while in the Army. “That’s what you need in a fast-paced, stressful environment (as a pilot). You have to make quick decisions and these skill sets apply to everyday life, and give you the confidence of knowing you can accomplish what you set out to do.”

As a college, “MTSU was home for me. It had everything I wanted in a university,” Gray said. “The Aerospace Department staff is what makes the program what it is. It’s some of the most caring folks I’ve ever met and the size of the program allowed us to develop a personal connection with our professors.”

Associate professor Nate Callender’s “Theory of Flight” class was “by far my favorite while in school,” Gray said, adding he still references notes he took in the class. Peter Neff, Andrea Georgiou, Wendy Beckman and Paul Moseyare among other faculty and staff who stood out.

“We are delighted by Colton’s accomplishments and look forward to seeing what is next for him in his journey,” Aerospace Department Chair Chaminda Prelis said. “Opportunities like this are rare, and we are honored to be in this partnership with Delta Propel in supporting our student’s dreams of becoming professional pilots.” 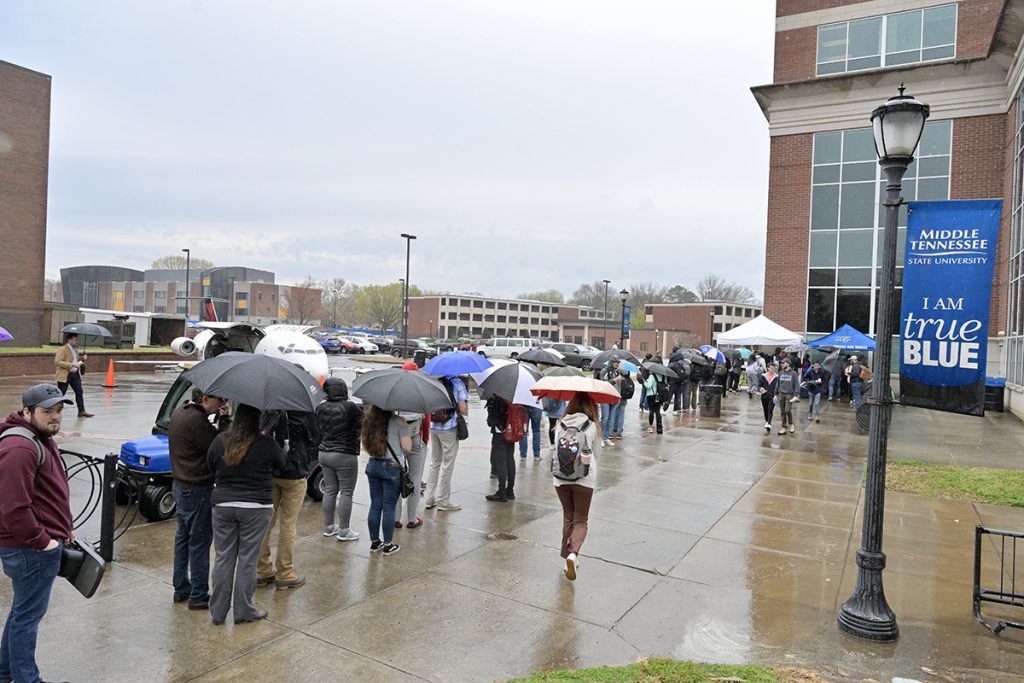 A long line of MTSU students wait in the rain to obtain a free hot dog meal made from the massive, customized Delta Air Lines grill (shown in background) that resembles a small jet near the Quad area next to the James E. Walker Library Tuesday, April 5, following a 30-minute program recognizing Colton Gray of Lebanon, Tenn., as the first graduate in the accelerated Delta Propel pilot program. (MTSU photo by Andy Heidt)

McPhee said MTSU “looks forward to growing and strengthening our partnership with Delta to include corporate education agreements.”

The president then alluded to the major growth in the Aerospace Department by bringing up an eventual expansion to Shelbyville, Tennessee.

“With the pending plans for an Aerospace Academy, our bold momentum for both MTSU Aerospace and our entire university continues,” he said. “More progress is on the horizon. I thank Provost (Mark) Byrnes, Dean Van Patten and Dr. Chaminda Prelis, chair of the Aerospace Department for their strong and sustained leadership.”

Record-setting growth in the past six years and development at city-owned Murfreesboro Airport, home to MTSU’s Flight Operations Center, have led MTSU officials to pursue the Aerospace Academy.

To learn more about the Delta Propel program, go here.