A healthy start: MTSU alumni i.. 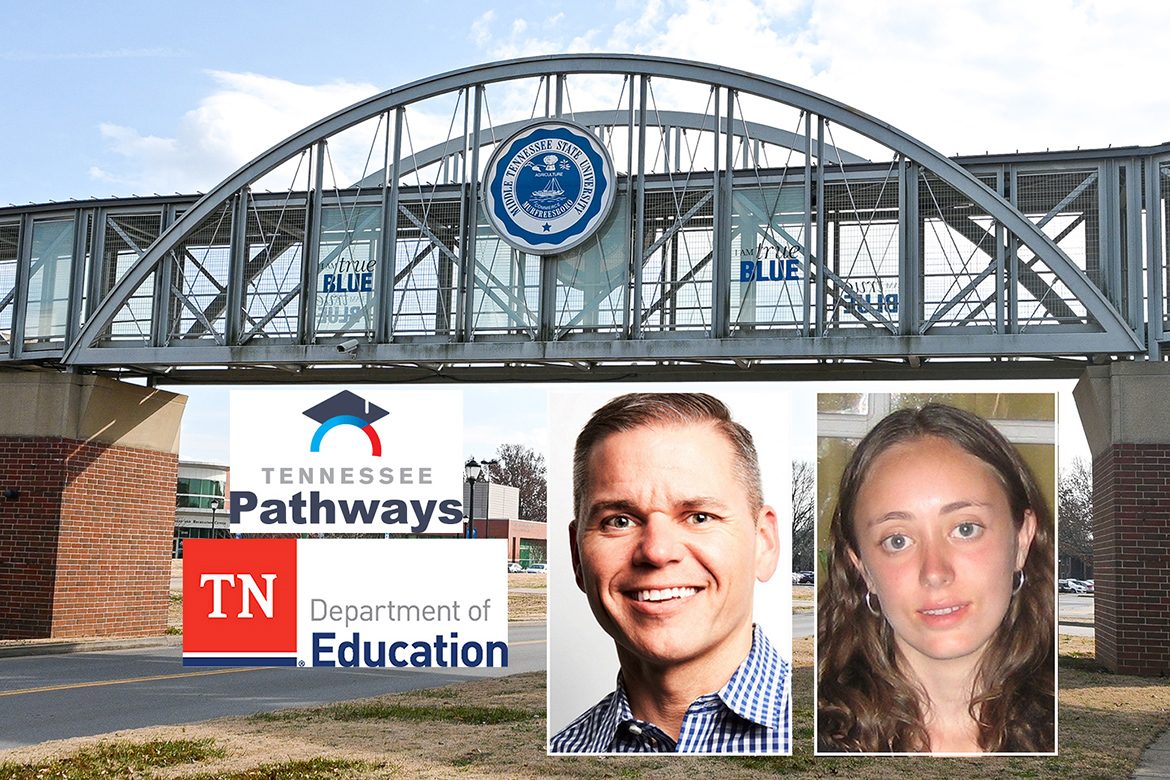 MTSU has been named a partner institution on a nearly $1 million grant awarded to the state by the Institute of Education Sciences to research the impact of the Tennessee Pathways program.

Researchers will evaluate if the career pathways initiative has been effective in its goal to align K-12 education, postsecondary education and employers in order to give students a clear and relevant pathway into the workforce.

A partnership between the Tennessee Department of Education and the Tennessee Board of Regents, Tennessee Pathways provides high school students access to a career and technical education, or CTE, elective program of study, work-based learning experiences, early postsecondary coursework and opportunities to earn an industry certification or articulate credits at a partner postsecondary institution.

MTSU’s Chaney Mosley and Elizabeth Dyer will serve as co-principal investigators on the three-year project — titled “Analyzing and Understanding the Educational and Economic Impact of Regional Career Pathways” — along with other investigators from the Tennessee Department of Education, University of Tennessee-Knoxville, University of Massachusetts and Education Strategy Group.

“This project is truly a research-practice partnership with the Tennessee Department of Education that has an emphasis on actually impacting policy,” said Dyer, assistant director of the Tennessee STEM Education Center, of the $926,761 grant.

“That is one of the things that makes this project so interesting and why we are looking forward to working on it.”

Mosley, an assistant professor of agricultural education in the School of Agriculture, said that there has been a growing interest in career and technical education as one way to fill the labor-skills gap that exists between employers and job seekers. Agriculture, Mosley’s expertise, is one of many CTE programs of study such as business education, health science and others.

“Recognizing the need for post-secondary education is important, but there are two other pieces that are missing: employability and technical skills,” Mosley said. “Career technical education like the Tennessee Pathways provides both of those to learners. This research project is a great opportunity to study the impact of the program and its efficacy.”

Mosley also said that MTSU has a tremendous amount of expertise regarding quantitative and qualitative data analysis that plays into the university’s role in this research.

“MTSU’s specific role in this investigation is taking lead on the qualitative data collection and data analysis,” he said. “We’ll be partnering with Education Strategy Group to create initial surveys that will be given to families, teachers and school system leaders across the state who are involved in the Tennessee Pathways program.

“We’ll also be conducting some interviews and listening to the things that people say about their experience in Tennessee Pathways, so that we can really identify the salient aspects of the program at various levels — school level and system level — that are either increasing access to students or that families find are the most beneficial, so that we can take a good program and make it excellent.”

Career and technical education is experiencing a resurgence across the country as an approach to dropout prevention and closing a skills gap that exists.

“In public education, we have a responsibility to make learning both engaging and exciting for every student while they are in school, and meaningful to them long after they graduate,” said Tennessee Department of Education Commissioner Penny Schwinn.

“Tennessee Pathways is critical for the state and will build upon Tennessee’s history of collaboration between K-12, postsecondary and industry to create, strengthen and expand local partnerships that help students to be ready for success during and after high school.”

Before her career brought her to MTSU, Dyer earned her doctorate in learning sciences from Northwestern University, worked at Horizon Research and WestEd as a STEM education research associate and completed postdoctoral research at Stanford University.

After that, he was the CTE director for Metropolitan Nashville Public Schools, where he led a team in the development of high-quality career pathways characterized by partnerships with employers and postsecondary-education providers to create work-based learning opportunities for students.

Originally starting out as a middle and high school agricultural education teacher in Tennessee, Mosley now prepares undergraduate students to teach in one of six agricultural career pathways across the state in his role in the School of Agriculture at MTSU.