'Wonder Woman and Her Sisters'.. 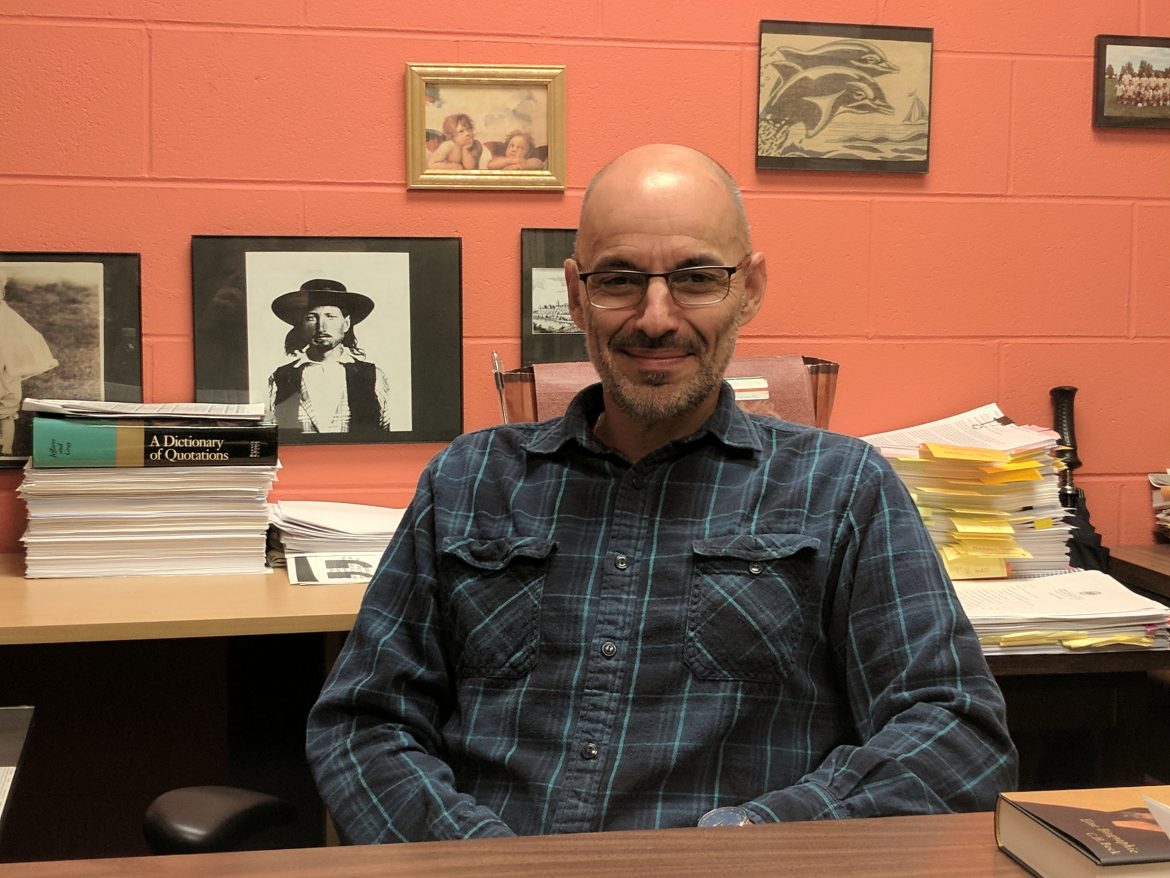 This week with the Student Voice, we’re meeting up with Dr. Alfred Lutz of the English department to discuss Jane Austen, garden gnomes, and being a first-generation college student. Dr. Lutz teaches introductory classes, eighteenth-century literature, and a survey of British literature.

Thanks for agreeing to the interview today! For starters, where did you go to college?

How did you first become interested in English as a subject?

I started out studying history, philosophy, and German lit in college. When I lived in the U.K.–and later in the U.S.–I thought that the easiest way to improve my English would be to take English literature classes, and I ended up liking the subject. Back when I was high school in Germany, you had to have two concentrations, what you might call two “majors”. You’d take five hours of each major subject rather than two hours, and the final exams for those subjects would also be more intense than the exams for your other subjects. One of my two concentrations in high school was English, so I really had an interest in it going back to my earlier school days. But the fact that I’m now an English professor is a result of taking English classes once I decided to come to an English-speaking country.

When did you come to MTSU?

1998, so it’s been nearly twenty years! Three or four years ago, for the first time, I actually had a student whose mother I had taught. I think this is true for most people in higher education: you go into the job market, and if you’re lucky you get an on-campus interview, and if you’re even luckier, somebody offers you a job. The year I went on the market, MTSU offered me a job. I’d never been to the South before and thought it would be an adventure, and I liked all the people that I met when I came to the English department, so I decided to stay.

How did you decide that you wanted to teach?

I’ve always had an interest in teaching, especially at the university level. At the university, you have a lot of control over how you spend your time, what kinds of interests you pursue, and what kinds of things you teach. That independence and intellectual adventure always appealed to me, and I’ve always liked working with young people. It’s really good work, and I think if you take it seriously, students will learn from you and you can be useful to them. You are likely to do some good, and you are unlikely to do any damage. It’s different if, say, you work in a factory that manufactures land mines. But that’s an extreme example (laughing).

If you could recommend just one of your classes for every student at MTSU to take, which class would it be and why?

I used to teach a Holocaust studies class, and those books are really interesting and harrowing–horrific, horrific stories. There’s a lot to be learned from them. It’s important to know that ideas have histories; they come from particular places and then they change over time. I also teach a survey course on British Literature from 1660-1900, where you can follow an idea through 300 pages and see what happens to it. There’s also Appreciation of Literature, a general education class, which is really interesting because you take a few highlights of your favorite books and talk about them to students, and you can go in whatever direction the students want to take it. If I teach a particular period in a survey course, there are certain things I have to cover, and certain things I can’t. You’re limited by the period. But 2030 can be any poetry, prose, and drama, so you can teach whatever books you think might fit together.

What are three books that you think every student should read?

I think there is no one book that everybody should have read, because everybody needs different things from what they read, and you need different things at different times. But one book I really like is “Remembrance of Things Past”, by Marcel Proust. Now, whenever you’re asked a question like that and you give Proust as an answer, everybody goes “what an arrogant person this man must be”. And it’s probably true (laughing). But what is amazing about it is that he spends dozens of pages on one minor event that could have been covered in a paragraph or less, and it becomes important in the detailed telling. His writing is so perceptive and so detailed that you realize that he’s teaching you how to look at things, and what you can see if you just take the time to look carefully. Then in my 2030 class, I teach “Things Fall Apart” by Chinua Achebe, and that always works like a charm. It’s about the conflicts of Igbo culture facing British colonialism, and what happens to that culture. It’s a short book with just a handful of characters, very easy to read, not at all theoretical, but it is an enormously sophisticated investigation of those characters. Students always say at the end of the semester, “Those characters have really stayed with me”. It’s considered one of the greatest novels to ever come out of Africa.

And then I always liked Jane Austen; if I had to pick one of hers, I would pick “Emma”. It’s a sustained exercise in greatness from beginning to end, where you see what makes Austen a great writer. All of the characters know certain things, and most of them don’t know what some of the others know. It takes you a while to figure out what the relationships between those various people are. It’s just a great book by a great writer about important moral issues. But I also think that “Pride and Prejudice” is the best romance ever written, and it also works as a philosophical fantasy. It suggests that if you fully pay attention to people, you can figure out what they’re really like, which is actually not true in real life. We always remain opaque to others, but what a pleasant fantasy.

I wish I’d made the same mistakes earlier. I was “unteachable” for a while; I simply was not going to take advice from anybody. Part of it is that I was a first generation student, and it was a bit overwhelming for me. I didn’t know anybody who had gone to college, so I didn’t know how anything worked; you don’t want to ask stupid questions, so you don’t ask any questions at all. I think that’s true for some of our students too. A substantial percentage of them are first generation, and they may be dealing with the feeling that they don’t belong initially. Even though MTSU reaches out to them and people are nice to them, it’s a strange environment. You just have to assume that people are here to help you, that they’re excited to help you, and that they’re your allies, not your opponents.

What’s one piece of advice you’d give to your students?

Don’t believe in the rhetoric of the student as a customer. I think that is a catastrophic way of thinking about education. If you go to a Radio Shack and you want to buy a television, and you have $500, you can buy any TV there for up to $500. You’re not learning anything from the buying experience. If you think of yourself as a customer, then you don’t really have to make any effort. As a student, you have an opportunity to work very hard for a few years under the guidance of experts in various subjects; but the work is actually being done by you, the student, which is not the case when you just go and buy something. As a customer, you assume that you don’t have to make any effort, and that’s not what getting an education is about.

When I was a freshman, I had a history class in which the professor took a liking to me, even though I didn’t have really anything to offer to him. I was entirely new to the subject, and he was an internationally known professor in his field. In the course of the semester, I turned in something that I hadn’t worked very hard on. When I got it back, there wasn’t a single mark on it–no grades, no comments, nothing. I didn’t know what to make of it. When I asked him about it, he said “You’re going to do this over again.” He told me that he comes to class every day prepared to give his best to the students, and that he wouldn’t accept anything less than my best as his student. I think it’s important to get a sense of what acceptable standards are. If you’re lucky, a professor will model them for you, as mine did. As a student, you should also try to hang out with people who uphold those standards and take their education seriously.

What is one thing about yourself that your students would never guess?

I like garden gnomes, and I have a substantial collection of them. It’s actually pretty widely known now; students who write theses under my direction end up giving me garden gnomes at the end of the process. Some of my friends at the art department actually made me a garden gnome over the summer. Every year, I buy one or two, and then every year people give me one or two, so now I have a courtyard full of garden gnomes. I have 31 of them in a very small courtyard. I have a bit of a gnome problem.

How would you recommend that students apply the skills that they learn in your class into real-life situations?

In English particularly, you’re probably going to improve your writing and pick up research skills. Writing skills are applicable everywhere, and the research skills will be useful because they’re now saying that the average American will hold around 5 jobs over their career, and that means you’re going to have to be able to learn things as you go. You’ll be able to do that if you’ve picked up research skills, and it’s amazing how many of those you pick up as an English major without even knowing it. You learn how to think rigorously and to communicate, to state your thoughts clearly, and to understand what the other side has to say. You also learn that reading is one of the great sources of human happiness. It makes it possible for us to increase our capacity to feel empathy. If you turn reading into something that you’ll follow throughout life, you’ll have at all times a place where you can go for some happiness. I truly believe that.