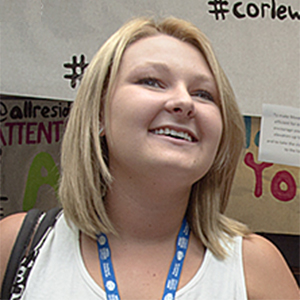 Middle Tennessee State University has the largest class of new freshmen and the largest population of new transfer students among the six universities in the Tennessee Board of Regents system, according to preliminary counts released Monday.

MTSU freshman Emily Neal of White House, Tenn., a member of the largest freshman class enrolled at a Tennessee Board of Regents university this year, is accompanied by her mother, Pam Neal, and her father, MTSU alumnus Tony Neal, as she moves into Corlew Hall during the We-Haul event Aug. 23. Emily is majoring in electronic media communication. (MTSU file photo by J. Intintoli).

MTSU’s new freshman population increased by almost 2 percent over last year, growing to 3,179 as of the 14th day of classes, the date TBR uses as the system’s enrollment snapshot.

The university welcomed 1,907 new transfers, the most of any TBR school.

“We are pleased that our number of new freshmen has increased,” said Dr. Deb Sells, vice president for student affairs and vice provost for enrollment and academic services.

The Western Interstate Commission for Higher Education, a resource for universities in admission forecasting, predicted a decline in Tennessee’s high school graduating class between the 2012-13 and 2015-16 school years.

“This is great news since the national average ACT decreased in 2013,” Sells said.

Sells said new transfer and graduate school enrollments are down, primarily due to the improving economy, coupled with the continuing shift in the burden of costs from the state to individual students.

“As students and families become increasingly concerned about costs and debt burden, they become more prone to discontinuing their investment in education in favor of immediate employment opportunities that may arise,” she said.

Dr. Michael Allen, vice provost for research and dean of the College of Graduate Studies, also said changes in state policy that remove “the link between graduate education and teacher salaries had a significant impact on the number of teachers enrolling in graduate courses.”

A bright spot in the graduate college, Allen said, was that enrollment in doctoral programs has increased: 304 students are pursuing doctoral degrees this year as compared to 279 last year — 25 more students for an 8.96 percent increase.

The top six feeder institutions for all transfers to MTSU were Motlow State, 1,473; Columbia State, 913; Nashville State, 908; Volunteer State, 846; the Universitiy of Tennessee-Knoxville, 320; and Southwest, 284.