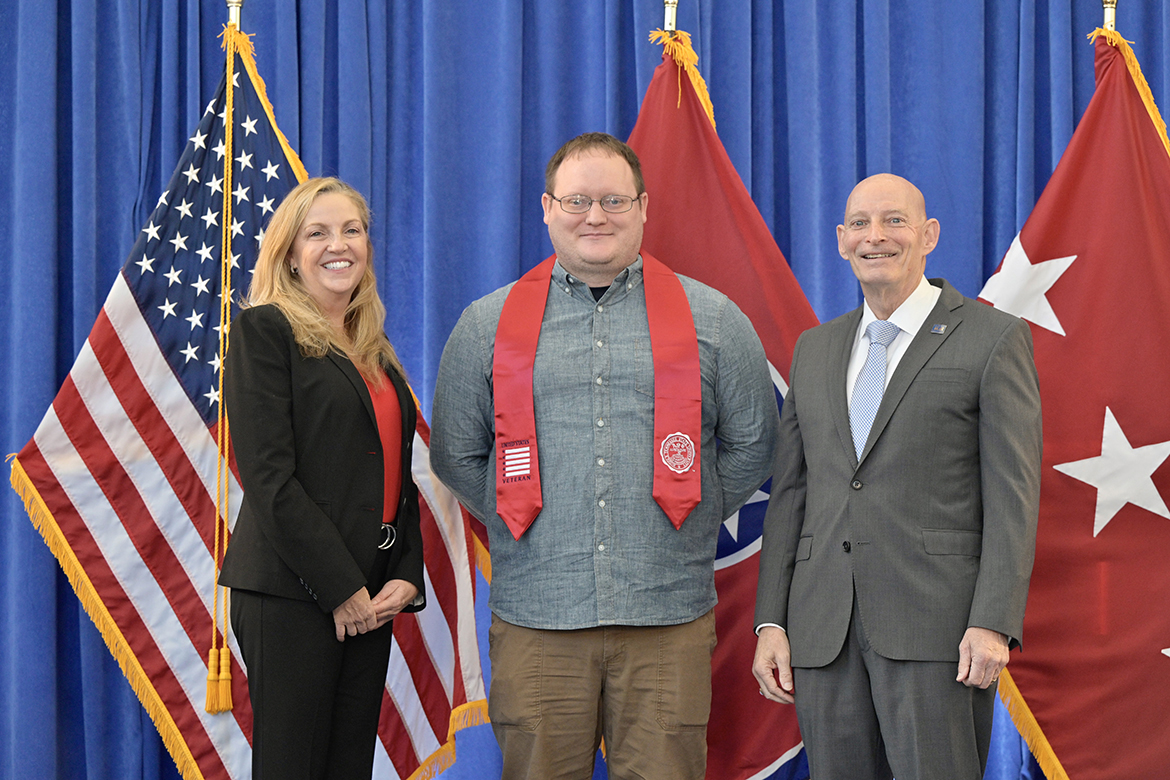 Middle Tennessee State University seniors Dennisse Osorio-Sanchez and Jordan Kinsey have served their country through different branches of the military.

Kinsey chose the U.S. Navy, with interest in a medical area. With social work aspirations in mind, Osorio-Sanchez, an Alabama native who had begun college but dropped out, signed with the U.S. Air Force and plans to commit to a full 20 years and retire as an officer.

They were among 28 MTSU student veterans attending the fall 2022 Graduating Veterans Stole Ceremony, held Wednesday, Nov. 30, in the Miller Education Center atrium. They received red stoles to wear at their upcoming graduation at 9 a.m.  and 2 p.m. Saturday, Dec. 10, in Murphy Center. Fifty-six student veterans are scheduled to graduate that day.

Stole ceremonies have become a three-times-a-year tradition for the host Charlie and Hazel Daniels Veterans and Military Family Center, home to more than 1,000 student veterans and family members.

One day after graduating, Kinsey, 27, a Murfreesboro, Tennessee, resident, husband and father of three children, begins the next chapter of his life as a registered nurse in the surgical ICU at the Nashville VA Medical Center. With the Navy, he was a hospital corpsman second class, helping prepare him for his new career.

“I’m going to be busy,” said Kinsey, who has been juggling academics and family and now will be managing the full-time job as he and wife, Jackie, raise Jordan Jr., 5, Benjamin, 4, and Noelle, seven months.

Kinsey entered MTSU as a sophomore in fall 2019. Eight weeks into the spring semester and first term of nursing school, the pandemic hit and “everything shifted to online learning. Nursing is one of those things where you have to do it in-person. The instructors at the School of Nursing (College of Behavioral and Health Sciences) did a good job of creating online scenarios to simulate caring for a patient in a hospital.”

Osorio-Sanchez, 22, will soon head to Maxwell Air Force Base in Montgomery, Alabama, to assist in the base’s finance office for one year. She then plans to attend graduate school, either at MTSU or one in Alabama, where she can commission as a second lieutenant.

For Osorio-Sanchez, closing this chapter through graduation “is a big milestone,” she said, adding she was supposed to graduate in May, but got deployed to Abu Dhabi, capital of the United Arab Emirates.

“I felt it was a halt or stop on my original plan,” she said. Then, based on something Keith M. Huber, MTSU senior adviser for veterans and leadership initiatives, shared with the audience, Osorio-Sanchez added, “it’s all about adaptability.”

She hopes to graduate with honors with a Bachelor of Social Work degree and has been a member of Delta Signa Theta Sorority Inc., vice president of administration for MTSU’s National Panhellenic Council and other student organizations.

Retired U.S. Air Force Brig. Gen. Ellen Moore, senior program manager with Workforce Staffing at Amazon in Nashville, shared with the student veterans “how valuable our military are to employers.”

Moore also wanted to tell them “how proud you should be of your accomplishments. Be a mentor to others and continue your education.”

With Amazon, Moore is part of Workforce Staffing for the hiring of 1.3 million employees — 1 million Tier 1 (entry level) associates and another 300,000 on the corporate side.

‘A welcoming place with opportunities’

Huber, a retired U.S. Army lieutenant general who spent 38 years serving his country, greeted the honorees and guests, calling MTSU “a welcoming place that can provide you with opportunities” and “be proud of your success. You obtained this education to assist you in the next phase of your life.”