Blue Raiders on the Black Sea

Center for Innovation in Media.. 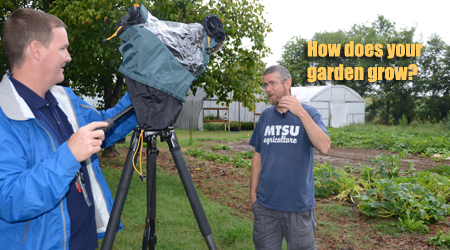 MTSU Agriscience Professor Nate Phillips, right, explains how the university's student-run garden has weathered the drought while a Nashville TV videographer shields his camera from the rain. (MTSU photos by News and Media Relations)

Bumper crops of vegetables are continuing at the Friday Student Farmers Markets at MTSU.

Dr. Nate Phillips, an assistant professor in MTSU’s School of Agribusiness and Agriscience who oversees the student-run garden at the university farm off Guy James Road in nearby Lascassas, said market visitors should expect to see “lots of green beans and lots of tomatoes.”

Despite the oppressive heat and severe drought that has plagued Rutherford County for June and much of July, along with a faulty irrigation system, Phillips said the Plant and Soil Science Club has enjoyed a fruitful year.

“It has been a great year, actually,” Phillips said. “We had the earliest sales start (May) ever. We had a good cool-vegetable season. We’re ramping up with the warm-season vegetables.”

The Student Farmers Market is open to the public each Friday from noon to 3 p.m. at the Horticulture Center on Lightning Way, just off Greenland Drive near the Tennessee Livestock Center.

MTSU senior Eric Limbird juggles fresh vegetables he picked in the rain on July 12 at the MTSU Farm in Lascassas.

An irrigation system that brings water to the farm from the East Fork of the Stones River has been down because of issues with the pump, Phillips said.

“We’ve been moving the hose around three times a day, keeping each section going,” Phillips said this week. “We’re almost running irrigation nonstop through the hot weeks. Students have been getting out here on weekends and after hours.”

Phillips said one tap coming out of a well dug years ago has been providing water for the vegetables.

The combination of multiple days of 100-plus-degree heat and an extended period without rain hurt lettuce and salad greens, said Phillips, who added that those crops aren’t irrigated.

Garlic, which depends on spring rain, produced only small cloves, he continued.

Austin Lohin of the farm staff reported that the garden had received about three inches of much-needed rain when the clouds finally opened up the week of July 9.

“It’s (been) muddy, too muddy to get into the garden,” Phillips said. “We do use hay mulch to keep water in and minimize evaporation.”

He added that they use drip tape as a water-conservation system method of getting water where the plants need it.

Six regular workers handle garden duties. Phillips said May and June agriculture classes also lend a hand. There is no class in July, but some class members keep coming to help.

“Some volunteer to work,” Phillips said. “It’s a sense of ownership for them.”