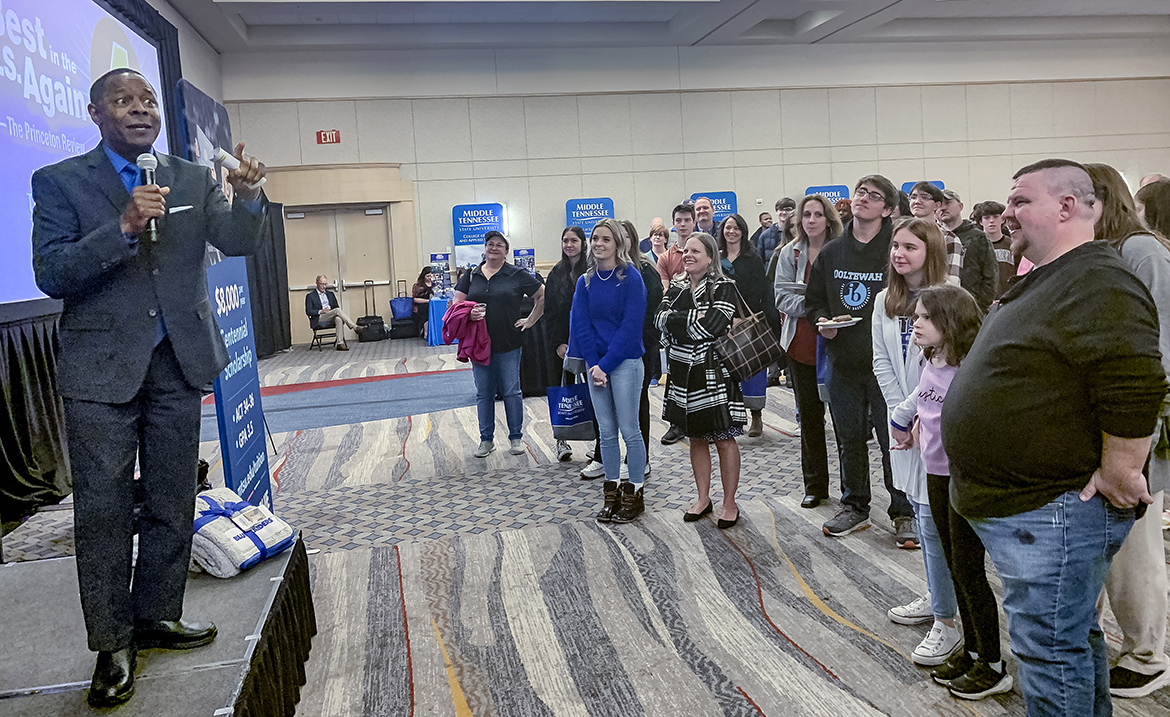 ATLANTA, Ga., and CHATTANOOGA, Tenn. — Contrary to the theory “you must be present to win,” having someone represent you worked for two prospective Middle Tennessee State University students recently at the True Blue Tour stop in Atlanta.

One day later and more than 100 miles north in Chattanooga, one potential student with ambitions to fly and his family were “driven” to come almost that far from Lenoir City, Tennessee, and a gifted young woman who can play the clarinet and 10 other instruments plans to swap her school and youth bands and ensembles to be a part of the Band of Blue and other MTSU music groups.

The 14-city True Blue Tour, where university administrators, advisors and staff and Admissions Office staff recruited thousands of prospective students and courted dozens of counselors and community college partners across Tennessee, Alabama, Kentucky and Georgia, ended with a successful final swing to Atlanta and Chattanooga.

Good fortune on their side

Potential transfer student Khalil Bailey of Jefferson, Georgia, near Athens, can thank his aunt, Ayanna Yarborough of Atlanta, for attending the tour event at The Westin Perimeter NE in Sandy Springs on Wednesday, Nov. 16. His name was drawn for a $10,000 scholarship.

“He was very excited,” Yarborough, a social studies teacher, said just after talking to her nephew by phone. Bailey, 22, dropped out of college when the pandemic hit in 2020 and has not returned. He may pursue Leisure, Tourism and Sport Management at MTSU in fall 2023.

“This was so unexpected,” Bailey said. “I didn’t know what to think when she told me.” The son of Amber Bailey, a single parent, he has five siblings, including Kadin Bailey, a freshman linebacker at the University of Syracuse. Khalil Bailey’s father, Boss Bailey, played nine seasons in the NFL and his uncle, Champ Bailey, is in both the Pro and College Football Halls of Fame.

Speaking of sports, recent MTSU soccer signee Presley Morales of Marietta and Pope High School could not attend the event because of another family commitment. So, her mother, Elena Morales, filled in and won a special blanket and $1,000 book scholarship from McPhee.

“I was really bummed I couldn’t make it,” said Presley Morales, 17, who has a 3.6 GPA and whose team advanced to the elite eight state soccer tournament. She plans to study political science at MTSU.

One talented musician heading to MTSU

Autumn Cadieux, 17, a senior at Signal Mountain Middle High School, is all things music. She plays in the school marching band and at school concerts, the Chattanooga Youth Orchestra and in her own woodwind and flute ensembles and theatre program.

Cadieux has applied, been accepted, has a Jan. 26 lesson scheduled with professor Todd Waldecker and a February School of Music audition to be accepted as a music major, minor or receive lessons. She won a $5,000 scholarship in Chattanooga.

When Luke Malone told the Chattanooga audience how much he “loves the MTSU chocolate milk” from the School of Agriculture’s Farm and Dairy in Lascassas, Tennessee, McPhee added $500 to his $5,000 scholarship. With a 4.0 GPA and 27 ACT, Malone wants to pursue an Aerospace professional pilot degree.

Unable to attend the tour event in Knoxville, Tennessee, because of a scheduling conflict, the Malone family — Luke, 17, younger sister Lucy Kate, mother, Joy, and father, Michael — drove about 180 miles round trip from Lenoir City to attend.

“This means my family won’t have to worry too much about the financial costs,” said Luke Malone, a Lenoir City High senior who already qualifies for an MTSU Presidential Scholarship and Hope Lottery scholarship. “I can enjoy my time at MTSU.”

Recent Student Government Association President Winton Cooper, who works for the city of Atlanta’s stormwater compliance department as an environmental scientist, spoke to attendees at MTSU’s event in Sandy Springs.

“I felt like I was at home with such great people (at MTSU), the administration and staff and the best faculty, staff and students at any university I have ever gone to,” said Cooper, who, like McPhee, is a Bahamas native.

“There was always something to do on or off campus,” Cooper added. “There’s a diverse range of students, enabling me to expand my horizons and become more engaged and active. It was a great place to discover who you are becoming. MTSU helped make a leader out of me. It will be your home, too.”

McPhee, one of the former student’s mentors, said he is “very proud of Mr. Cooper and what he has accomplished.”

Deb Sells, vice president of Student Affairs and vice provost for Enrollment and Academic Services, continually referenced the upcoming Dec. 1 deadline to apply and be considered for guaranteed scholarships for qualifying students ranging from $3,500 to $8,000 per year for four years.

For transfers, they have a Feb. 15 deadline. Qualifiers receive a $3,000 per year guaranteed scholarship.