In the News: Dean Urban featur.. 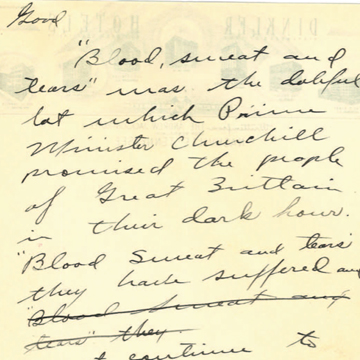 “As we celebrate the 225th anniversary of Congress this year, we are pleased to highlight the work of several local members of Congress who devoted decades of their lives to the service of Tennessee,” said Dr. Jim Williams, director of the Gore Research Center.

Among the historical materials recently made accessible to the public for the first time are the typewritten radio addresses that then Congressman Albert Gore Sr. delivered weekly on WSM radio leading up to and during World War II. Those interested can see Gore’s own handwritten changes on the typescripts of the speeches on the research center’s website (http://gorecenter.mtsu.edu).

“Through the support of former Congressman Bart Gordon,” Williams continued, “we have been able to process his papers faster than is usual — and the first batch of legislative files is now available for research.”

Gordon represented the Tennessee’s 6th Congressional District in the U.S. House of Representatives from 1985 until 2011. The MTSU alumnus, now a partner in a Washington, D.C., law firm, received an honorary doctorate from his alma mater last May.

Similarly, the first segment of Congressman Jim Cooper’s correspondence from his time as the representative in Congress for the 4th District from 1982 to 1994 is open. Cooper, D-Nashville, currently represents the 5th District, a post he’s held since 2003. Finding aids for these collections are available on the center’s website.

“Congress Week” is a program of the Association of Centers for the Study of Congress, to which the Gore Research Center belongs. More information on events taking place around the nation may be found at www.congressweek.org.

The Gore Research Center is a nonpartisan public service of the College of Liberal Arts at MTSU and is the premier repository for the personal papers of members of Congress and the Tennessee General Assembly in Middle Tennessee. Its collections are open to anyone with research needs without charge. The center is located on the MTSU campus in Todd Hall.