'John Roberts and the Supremes.. 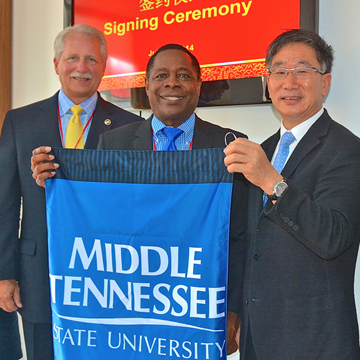 The pact, signed by MTSU President Sidney A. McPhee and Miao Jianhua, director of the Guangxi Botanical Garden of Medicinal Plants, also secures MTSU’s worldwide rights, excluding China, to patent and market products developed in the partnership. The partners agreed to a 50-50 split of any profits from the collaboration.

MTSU President Sidney A. McPhee, center, presents a banner from the university to Miao Jianhua, second from right, director of the Guangxi Botanical Garden of Medicinal Plants in Nanning, China, after signing an agreement July 21 to extend a research pact between the entities until 2021. Assistant professor Iris Gao, at left, state Sen. Bill Ketron and professor Elliot Altman, at right, accompanied McPhee to the ceremony. (Photos by MTSU Marketing and Communications)

It extends an exclusive agreement that began in 2011 between the Tennessee Center for Botanical Medicine Research at MTSU, led by professor Elliot Altman in the College of Basic and Applied Sciences, and the garden to accelerate the development of Western medicines from plant extracts.

“This is an important milestone in the continuation of our relationship,” said McPhee, who was joined by state Sen. Bill Ketron, R-Murfreesboro, at the ceremony.

“It speaks to the long-term potential of our work and our mutual desire to plan ahead for future collaborations.

“We are leveraging our resources and our expertise in China and the United States in a way where it will be a win-win for both of us,” McPhee said.

Located in Nanning in southern China, the garden was named in 2011 as the world’s largest medicinal herb garden by the Guinness Book of World Records. It features more than 7,400 medicinal plants.

The partnership plays to the strengths of both institutions, Miao said. Garden researchers cultivate and prepare extracts. MTSU scientists then screen the samples to determine their promise in the treatment of ailments.

The application of traditional Chinese medicine for the treatment of a variety of diseases is an ancient and respected tradition widely accepted in the Far East and gaining in awareness in Western cultures.

The pact declares the shared goal for “research and development opportunities for possible, beneficial, medicinal compounds and supplement compounds of potential commercial value.”

Iris Gao, an MTSU assistant professor who works with Altman, said an analysis of 52 plant extracts recently provided by the garden identified 29 with promising results, including 12 with anti-cancer activity; eight with promising anti-inflammatory activity; and one that may be useful to treat diabetes.

This set of 52 extracts is in addition to the almost 40 results identified last year with showing promise in the treatment of cancer, viral infections and other aliments.

Ketron, the Senate’s majority caucus chairman and a 1976 graduate of the university, has closely followed MTSU’s work in the partnership. He was instrumental in starting MTSU’s work as a demonstration project to determine ways for Tennessee farmers to grow ginseng as a cash crop.

Last year, McPhee, Ketron and Miao celebrated the partnership’s progress with the christening of an MTSU-branded Joint Research Center at the garden’s research laboratory and headquarters.

During the July 21 brainstorming, Ketron challenged the team to focus initially on three or so products with the greatest potential to move to market, which will most likely be over-the-counter treatments for rashes, aches and insect bites.

“I am pleased to see how this partnership is progressing and lengthening,” Ketron said. “This is important work that could potentially yield great benefits on many levels, especially for our university and state.”

Miao agreed, saying he hopes to draw upon MTSU’s expertise in the Jones College of Business to help market products to reach Western consumers.

MTSU President Sidney A. McPhee and Miao Jianhua, director of the Guangxi Botanical Garden of Medicinal Plants in Nanning, China, shake hands in front of a group of supporters after signing an agreement July 21 to extend a research pact between the entities until 2021. MTSU professors Iris Gao and Elliot Altman and state Sen. Bill Ketron, shown standing from left behind McPhee, accompanied the president to the ceremony.