'MTSU On the Record' highlight.. 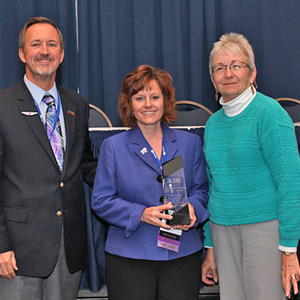 The Distinguished Program awards targeted successful programs that were innovative in approach and/or target audience. Accepting on behalf of MTSU at the November conference was Carol Swayze, director of the EXL Scholars Program.

Started in 2006, the EXL program is designed to enhance student learning through hands-on experiences in their fields of study beyond the traditional classroom and that engage the student directly in service. Students formally admitted to the program complete several activities: EXL coursework, an external service component, an MTSU internal service component and assessment activities, including development of an e-portfolio.

The goal is for EXL students to be better equipped to live productively and to think logically, critically and creatively.

Students receive EXL Scholar designations on their transcripts and wear special cords at commencement so they can be recognized for their achievement. During the 2012-13 academic year, the program enrolled more than 7,000 students in 237 approved courses with 169 students earning the EXL Scholars designation upon graduation.

Find out more about the EXL program at here.

The Meritorious Service Award received by Rust recognizes individuals for outstanding leadership and service to continuing higher education at their own institutions and to ACHE over a period of years.

According to ACHE, Rust has been actively involved in ACHE, ACHE South, and the Tennessee Association of Continuing Higher Education since 1997, holding numerous service and leadership positions. Rust served in various administrative roles for 20 years in MTSU’s University College, including serving as associate dean until she returned to the classroom this fall.

Rust now serves as an associate professor in University Studies at MTSU and is program coordinator of the Bachelor of University Studies major as well as the online bachelor’s degree program. Rust was nominated by Swayze for the award.

“Not only is she well-known and respected at MTSU, she has developed strong professional alliances throughout the state and region because of her reputation as a smart, enthusiastic, visionary leader,” stated University College Dean Mike Boyle. “Dr. Rust is respected by colleagues because she has the knowledge, the skills, and the tenacity to get the toughest jobs done.”

In her administrative roles, Rust had direct oversight of all distance education and nontraditional degree programs including curriculum changes and program reviews. Under her leadership distance learning enrollments grew from 3,000 in 1998 to more than 25,900 in 2011. She has been instrumental in the implementation of the Adult Degree Completion Program and Prior Learning Assessment Program.