‘MTSU On the Record’ studies f..

‘Saddle Up’ for drive-thru fun..

Powell was recognized with the unveiling of a commemorative brick in a special ceremony at the Veterans Memorial site outside the Tom H. Jackson Building. The outdoor event and others throughout the day followed COVID-19 safety protocols of wearing masks and social distancing. 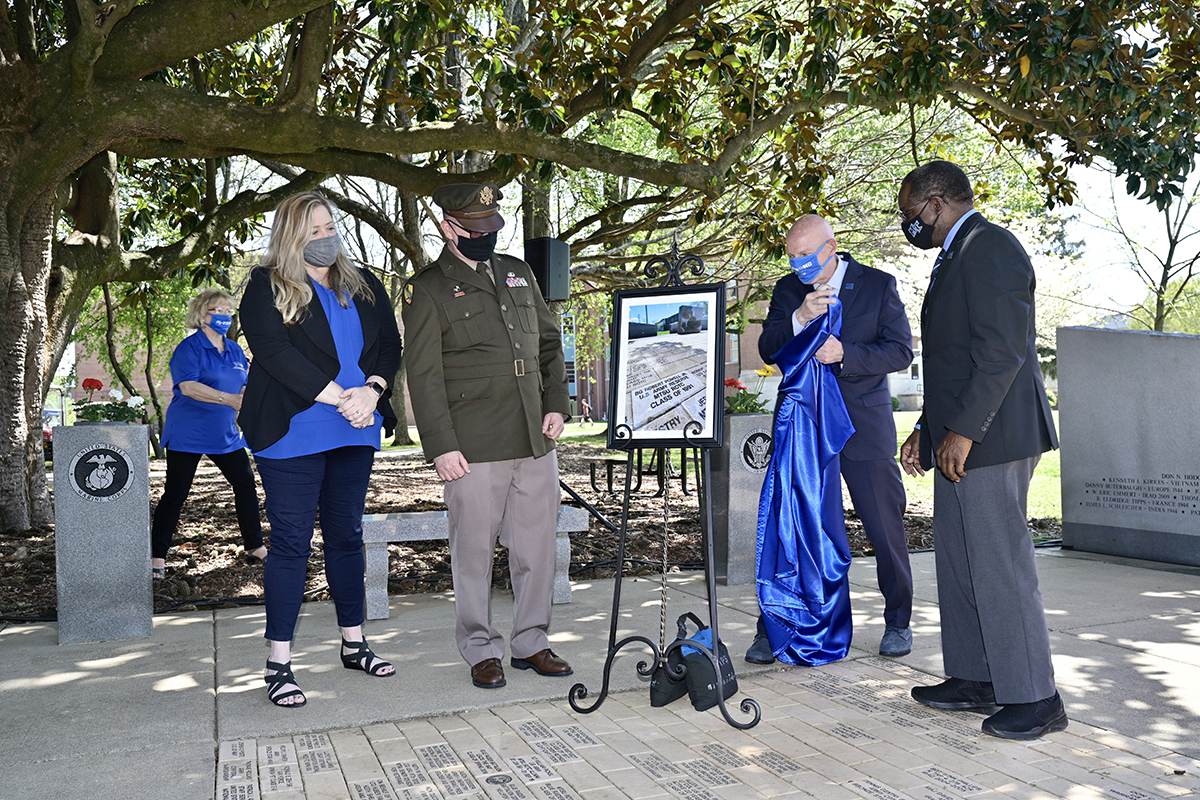 Brig. Gen. Robert S. Powell Jr., an MTSU alumnus, and his wife and fellow alum, Jill, watch as Keith M. Huber, senior adviser for veterans and leadership initiatives, and MTSU President Sidney A. McPhee unveil a framed photograph of the commemorative brick that was placed at the MTSU Veterans Memorial site outside the Tom H. Jackson Building Monday, April 12. Powell is the 17th MTSU alumnus to become a general officer. The deputy commanding general of the 335th Signal Command in East Point, Georgia, is a 1991 graduate from the university and its ROTC program. (MTSU photo by Andy Heidt)

Powell, a 1991 MTSU graduate with a degree in political science/international relations, is the deputy commanding general of the 335th Signal Command in East Point, Georgia, and the Army Reserve’s first cyber officer promoted to brigadier general.

Huber, a retired lieutenant general who served almost four decades active duty in the U.S. Army, offered some words of advice from his 14 years spent at the rank of a general officer and the weighty responsibility that comes with it.

“You clearly are no longer capable of being invisible … but you’re at a level now where people cannot ignore you,” Huber said. “Where if you use your energy to serve others, and your influence to change things for the betterment of the sons and daughters of America who are wearing the cloth of the armed forces … if you dedicate yourself to that service, then being a General Officer is great.” 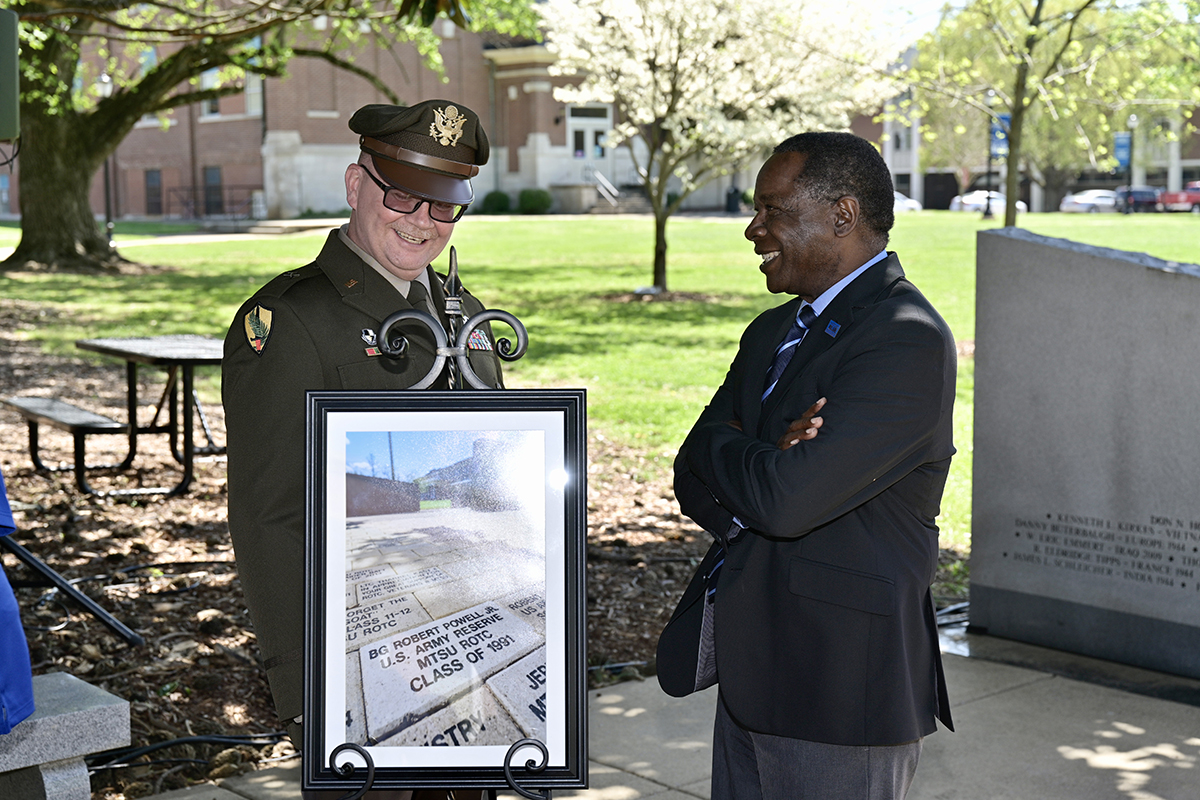 Brig. Gen. Robert S. Powell Jr., left, an MTSU alumnus, and university President Sidney A. McPhee share a laugh following the Monday, April 12. ceremony honoring Powell, now the 17th general officer to emerge from the 71-year ROTC program. MTSU presented a framed portrait of the brick, which has been placed at the Veterans Memorial site. (MTSU photo by Andy Heidt)

“This is very humbling,” Powell, a Bedford County (Wartrace), Tennessee, native said, speaking to a group that included wife Jill, who has communication disorders and special education degrees from MTSU and other family, friends, other MTSU officials, fellow generals David Ogg and Max Haston, ROTC cadets and others. “I never dreamed all these things would happen to me.

“When opportunities present themselves and you are going to be asked to do it, you just did it and moved on. You do it to further the mission and take care of people.”

“As the 17th alumnus of this great university to achieve the rank of general, he joins a distinguished list of heroes whom we are proud to call our own,” McPhee told the crowd gathered for the livestreamed event. “General Powell’s strong leadership exemplifies the high standards and ideals of MTSU’s Army Reserve Officers’ Training Corps program and its long history on our campus.”

McCarthy said the cadets and military science faculty “are honored to be a part of this,” welcoming Powell into the ROTC Hall of Fame “with other graduates of distinction” in Forrest Hall. “We have 19 cadets graduating this spring and summer. They stand ready to carry on in the tradition of these others who came before them.” 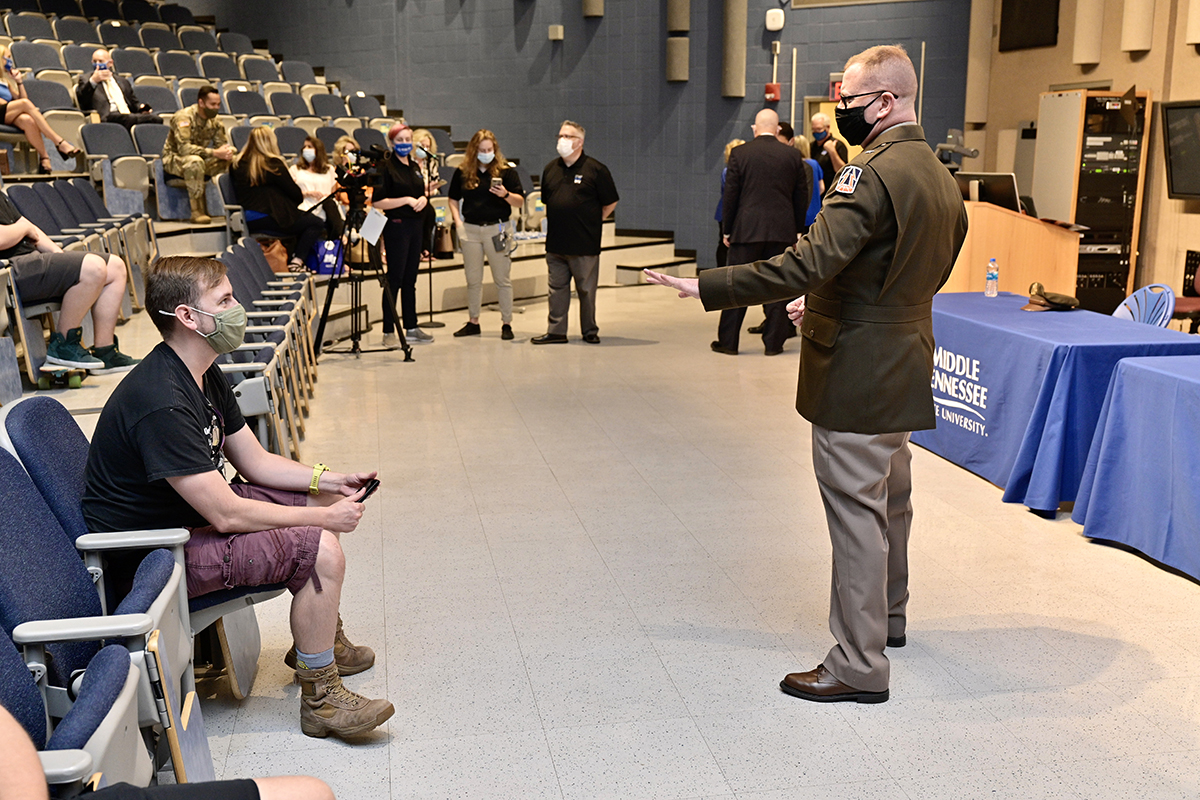 U.S. Army Reserve Brig. Gen. Robert S. Powell Jr., right, talks with MTSU senior Anthony Espinosa, a veteran, during Powell’s session with computer and data science students and MTSU officials Monday, April 12, in the Learning Resources Center. Powell, who is the 17th MTSU alumnus to become a general officer, was recognized with the unveiling of a commemorative brick while on campus. (MTSU photo by Andy Heidt)

While on campus, he talked about his cybersecurity career with MTSU computer and data science students in the McWherter Learning Resources Center — an event moderated by data science director Charlie Apigian. He also toured the Charlie and Hazel Daniels Veterans and Military Family Center.

Powell fielded questions from students. His advice for them: “With this generation, I think they’ve got the solutions. I would like to encourage them to come and join us because they can help us do this. They’re bright. They’re really reaching out. They’re not afraid to ask hard questions. These are the kind of people we need on the team.”

A replay of the ceremony can be viewed on the MTSU Facebook page. 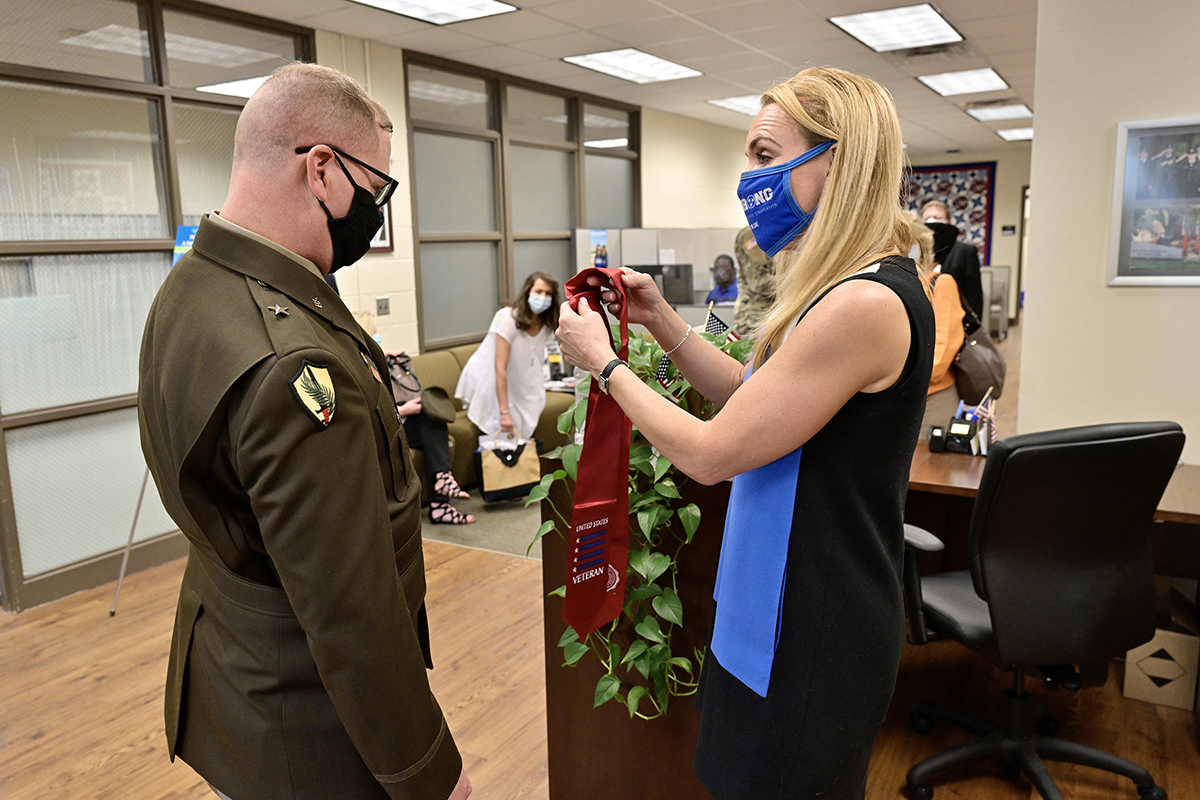 U.S. Army Reserve Brig. Gen. Robert S. Powell Jr., left, talks with Hilary Miller, director of the Charlie and Hazel Daniels Veterans and Military Family Center, on Monday, April 12, as she displays one of the special red stoles provided to graduating student veterans. Powell, who is the 17th MTSU alumnus to become a general officer, toured the Daniels Center after being recognized earlier that day with the unveiling of a commemorative brick at the MTSU Veterans Memorial site on campus. (MTSU photo by Andy Heidt) 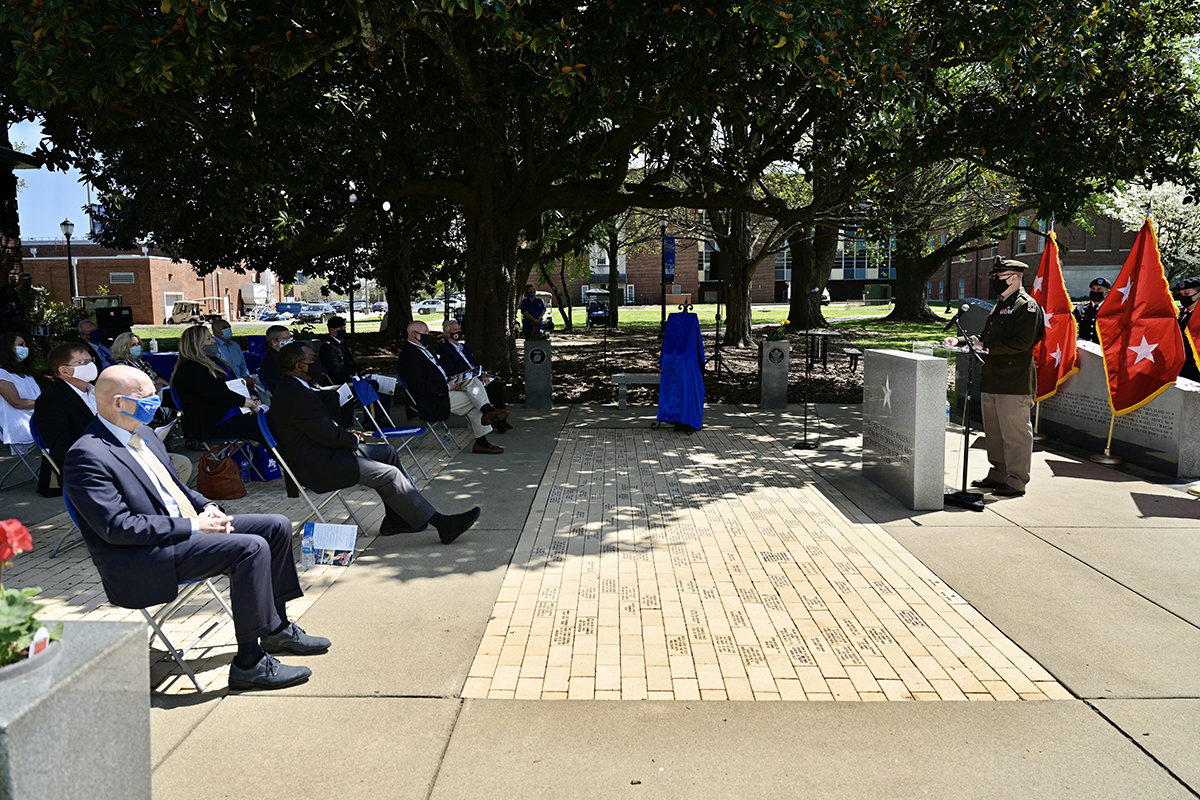 Brig. Gen. Robert S. Powell Jr., an MTSU alumnus, addresses the gathering of family, friends, MTSU officials, general officers and others Monday, April 12, at the Veterans Memorial outside the Tom H. Jackson Building on the MTSU campus. During the ceremony, there was an unveiling of a commemorative brick in his honor. Powell is a 1991 graduate of MTSU and its ROTC program. He is deputy commanding general of the 335th Signal Command in East Point, Georgia. (MTSU photo by Andy Heidt)