The Need to Feed

MTSU in Vietnam: ‘… greatest experience of my life’ 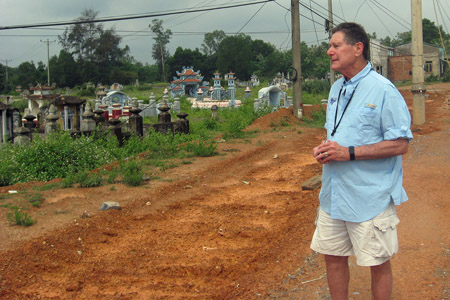 The Murfreesboro native calls his sojourn with the university’s Vietnam study-abroad class “the greatest experience of my life.”

In this March 21 photo, MTSU alumnus and Vietnam veteran William “Bud” Morris looks pensively in the direction of the Quang Tri Army base, which is about 1,000 yards from where he is standing. Morris joined an MTSU study-abroad class on a trip to Vietnam. (MTSU photos by Gina Logue)

Nine students signed up for a pioneering history course that requires them to compare Vietnam and the Vietnam War as depicted in American media with what they learn on a 14-day tour of the country that ended March 24.

Morris, now an insurance agent who bleeds State Farm red and MTSU blue, returned March 21 to the area where he served with the First Brigade, Fifth Infantry Mechanized Division of the U.S. Army during the Vietnam War.

“I don’t know that I came for closure or anything like that,” Morris said. “I came to see it. I came to experience it again.”

Despite having a deferment, Morris was drafted due to a shortage of available manpower in the country in 1968 and, following stateside training, was shipped to Vietnam for a six-month stint at a firebase known as Charlie Two.

“It was one of the forward-most firebases in Vietnam, and our mission was to secure that firebase,” Morris said.

He recalled that two infantry battalions would go out each day looking for spider holes and other evidence of the enemy.

“There were no trees,” Morris said. “There was very little vegetation.”

When he returned to where Charlie Two had been located, he was surprised to find American artillery shells still there, hidden under sandbags. Speaking through an interpreter, a Vietnamese man said he blows up the ordnance under controlled conditions every Friday at the same time and has done so for the past 12 years. The man works for a company contracted to dispose of the weaponry.

Morris served six more months at Quang Tri, an experience he describes as “rewarding.” He worked with the local Vietnamese equivalents of the city and county militia.

“We would bring about 20 people in every week for training,” said Morris. “We would clean their weapons. Most of them were rusted shut.”

In this March 19 photo, retired U.S. Marine and Vietnam veteran Bill Stilwagen of Vietnam Battlefield Tours instructs Joey Keasler, William “Bud” Morris and Courtney Schaaf at the site of the former Hue University, one of the pivotal locations of the 1968 Tet Offensive.

The divisiveness that characterized America’s involvement in the war hit Morris hard at a stopover in Chicago on his way home. A young woman clad in the counterculture fashions of the day walked up to him and asked him, “Are you just back from Vietnam?”

Morris finds no such venom coming from the MTSU students enthralled by the stories he tells.

Dr. Derek Frisby, associate professor of history, said Morris has provided his class with an “invaluable” opportunity “to connect the environment and the terrain with an actual human story.”

“Imagine what it would have been like 50 years after the Civil War to go back to the Battle of Stones River and have veterans guide you around the battlefield,” Frisby said. “This is what this experience is like for our students, and it’s one we can’t afford to pass up.”

MTSU student Courtney Schaaf, whose grandfather served as an Army engineer in the Black Virgin Mountain area, concurs, especially since she didn’t have a chance to ask him many questions before she departed the U.S. She was as emotional at Black Virgin as Morris was at Charlie II and Quang Tri.

“I started tearing up,” recalled the Mt. Juliet native. “Y’all didn’t see me, but I cried on the way back to the bus. And so, to be there with Bud for him to actually see his spot was a bit more emotional than for me to be there without my grandfather at his spot.”

Even with the help of GPS and the guides from Vietnam Battlefield Tours (www.vietnambattlefieldtours.com) in finding the coordinates of his former bases, Morris had little frame of reference for what he saw around him. But he had no trouble finding his bearings in shedding much needed light on a complicated time for young adults who were born after the U.S. departed Vietnam in 1975.

“I guess I’m a kind of living history of that age,” Morris said.

MTSU News and Media Relations staff Gina Logue journeyed to Vietnam with Dr. Derek Frisby’s study-abroad history class from March 10-24. To read about and see photos from the trip, go to www.mtsunews.com/vietnam-visit-2013. Reach Logue via email at gina.logue@mtsu.edu.