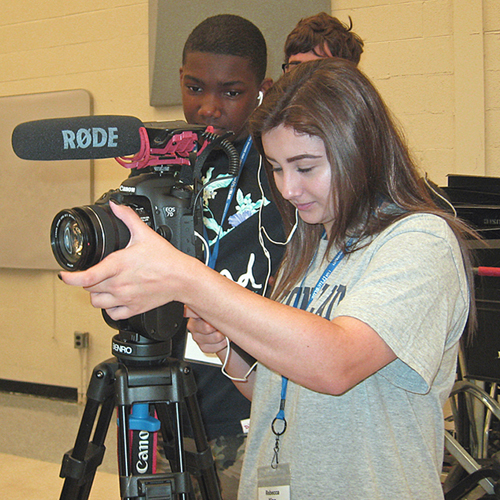 For the past week, 14 youngsters have delved into the world of professional journalism in a supportive, fun-filled multimedia environment.

They departed MTSU’s second annual Innovation J-Camp, which was held July 11-15 on campus, with a greater knowledge of what it takes to be skilled in videography, still photography, audio gathering and editing, internet posting and writing stories.

“We just pushed them a little harder because we found out that it didn’t take them as long as we thought it would to write a story or to edit pictures or to create a website,” said Val Hoeppner, director of MTSU’s Center for Innovation in Media and camp director.

Abby Latture, a junior at Madison Academic Magnet High School in Jackson, Tenn., edits her video on a computer at MTSU’s Center for Innovation in Media during the 2016 Innovation J-Camp. (MTSU photo by Gina Logue)

One of Hoeppner’s games, “Photo Bingo,” challenged the campers to take pictures of specific scenes around campus in order to fill all the squares on their bingo cards. Some of the scenes included “skateboard or bicycle” and “something blue.”

The camp’s partnership with Canon made it possible for the students to learn their craft with some $60,000 worth of donated photography equipment.

Rebecca King, a 17-year-old Central Magnet School student, said she gravitated toward still photography more than any other medium, a tendency she had not discovered before attending the camp.

“I wasn’t sure exactly what kind of field I wanted to go into in the media,” said King. “So this is a good way to experience journalism and filmmaking and photography and see where I really fit in.”

King also noted that the camp has given her a head start on creating work with which she can impress college recruiters and prospective employers.

“It helps you build a portfolio so you can already have things to show people,” she said.

Hoeppner confirmed that the camp is an amazing recruitment tool, noting that three incoming freshmen in the fall 2016 semester will be former campers.

For more information about Innovation J-Camp, contact Hoeppner at 615-898-2337 or val.hoeppner@mtsu.edu.