Christmas cheer abounds in the.. 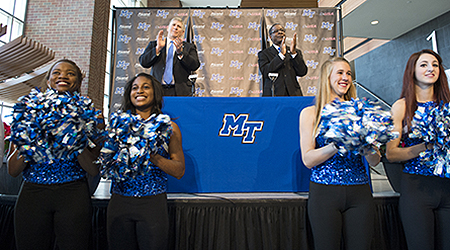 Middle Tennessee President Sidney A. McPhee announced Nov. 29 that the university has entered into a membership agreement to join Conference USA for intercollegiate athletics beginning no later than July 1, 2014.

A happy crowd cheers at the news that MTSU athletics will move from the Sun Belt Conference to Conference USA at a special Nov. 29 press conference held in the Student Union Building. (MTSU photo by J. Intintoli)

“We have worked at many levels to advance the quality of our athletics program and this invitation recognizes the hard work and excellent results of our athletes, coaches and administrators,” McPhee said at a 10 a.m. announcement event inside MTSU’s new Student Union Building.

“Our affiliation with C-USA will build upon the strong results we enjoyed as a proud member of the Sun Belt Conference and position us for even greater success.”

The C-USA membership beginning July 1, 2013, will include Charlotte, East Carolina, FIU, Louisiana Tech, Marshall, North Texas, Old Dominion, Rice, Southern Miss, Tulane, Tulsa, UAB, UTEP and UTSA. The league office is located in Irving, Texas. ECU will be leaving for the Big EAST Conference in football beginning with the 2014 season, and Tulane will be leaving for all sports for the 2014-15 campaign.

“This tremendous opportunity is the result of effort from many, especially Dr. McPhee,” said Director of Athletics Chris Massaro.

“I would particularly like to acknowledge the work of our student-athletes, coaches and, most importantly, our former student-athletes and coaches. They are the ones who truly built our foundation for this launching point. This invitation is a validation of their labor and the progress we have made at Middle Tennessee athletically and academically.”

C-USA teams and individuals have made nearly 700 NCAA championship appearances since the league’s inception in 1995-96. Sixty-seven football programs have earned bowl bids, 90 men’s basketball teams have participated in NCAA and NIT postseason play, 47 women’s basketball squads have appeared in the NCAA Tournament and 53 baseball programs have made NCAA tournament appearances, including 12 College World Series and a national crown for Rice in 2003. Additionally, 61 men’s and women’s soccer squads have participated in NCAA tournaments, with Charlotte competing for the men’s College Cup crown in 2011.

Middle Tennessee has spent the last 12-plus years as a member of the Sun Belt Conference, where it has won eight All-Sports trophies and 54 conference championships and had four Athletes of the Year and 38 Coach of the Year winners. The Blue Raiders officially made their announcement to the SBC on November 4, 1999, with the effective date of July 1, 2000.

Prior to the Sun Belt affiliation, Middle Tennessee spent two years as an independent and the previous 47 years as a member of the Ohio Valley Conference, where it won 11 league titles in football, made six NCAA Playoffs and appeared in four bowl games.

The Blue Raiders amassed an overall OVC mark of 192-115-4 (.624) during their 47 seasons of football competition, while having 15 Players of the Year and 177 first team all-OVC selections. In basketball, the women registered 11 OVC titles and the men garnered five. In all, the Blue Raider athletic program has accumulated 102 OVC Championships and nine All-Sports trophies.

“We have been impressed by the continued success at Middle Tennessee, which is a direct reflection of the outstanding leadership at that institution,” said Conference USA Commissioner Britton Banowsky. “They fit very well within the footprint of our conference.”

For more on the story, including comments from Middle Tennessee’s head coaches, visit http://www.goblueraiders.com/news/2012/11/28/GEN_64239.aspx?path=general. You can watch a video from the event below.