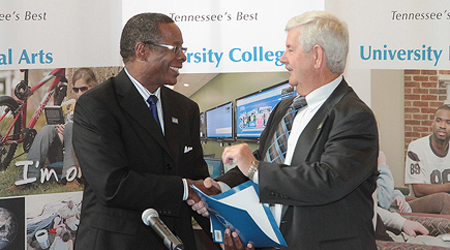 JACKSON, Tenn. — The presidents of MTSU and Jackson State Community College signed agreements today that will ease the transition for students seeking to transfer from the West Tennessee college to the university in Murfreesboro.

The signing took place in Jackson, the last stop of MTSU’s “True Blue Tour,” a six-city admissions caravan of deans, administrators and counselors. MTSU inked a similar agreement with Roane State Community College during the tour’s stop in Knoxville on Sept. 26. You can watch a brief video from the signing ceremony below.

“This agreement forges even closer ties between MTSU and Jackson State,” McPhee said. “We have made such pacts a priority at MTSU, as we are the No. 1 destination of transfer students in Tennessee. This agreement helps ensure a smooth transition for students between our institutions.”

“All of us at JSCC are excited to partner with Middle Tennessee State University on this dual admission agreement,” Blanding said. “By formalizing and clarifying this process, we are clearing the path for students wishing to continue their higher education as a Blue Raider.”

The concurrent enrollment aspect of the new agreement allows students to enroll for classes at both institutions simultaneously and get financial aid for the total number of credits if needed. Officials said that change will help students whose majors require lower-division courses not available at the community-college level, such as nutrition, interior design and Concrete Industry Management.

The reverse transfer portion of the plan gives former Jackson State students who transferred to MTSU before receiving an associate’s degree to transfer their MTSU course work back to the community college, eventually allowing them to get a Jackson State diploma.

Students must meet certain criteria to be eligible for the new partnership with Jackson State, including meeting admissions standards for MTSU.

Jackson State, also a TBR institution, provides accessible learning opportunities and services to a 14-county area. In addition to its main campus in Jackson, the school has full-service centers located in Humboldt, Lexington, and Savannah.