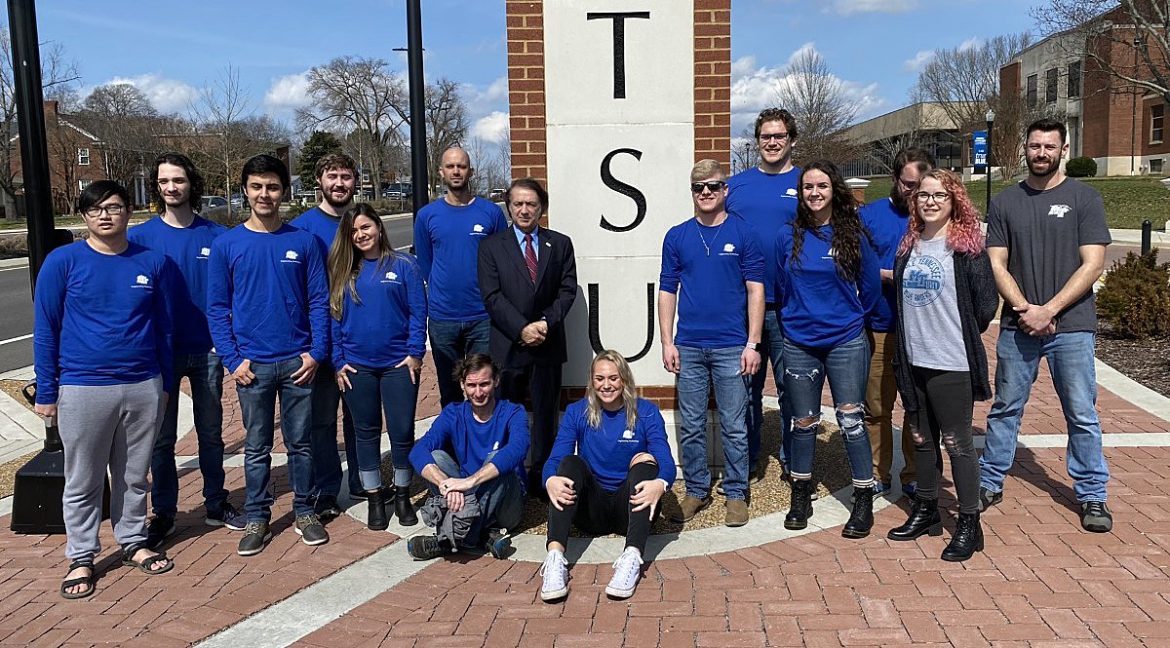 The 2019-20 MTSU Experimental Vehicles Program lunar rover teams couldn’t compete along with the elite international field at the 2020 NASA Human Explorer Rover Challenge, as the in-person event was canceled in April because of the COVID-19 pandemic.

However, the 14-person MTSU Team No. 2 earned the top engineering achievement prize — the American Institute of Aeronautics and Astronautics Neil Armstrong Best Design Award — in the university division for the second time since 2014. 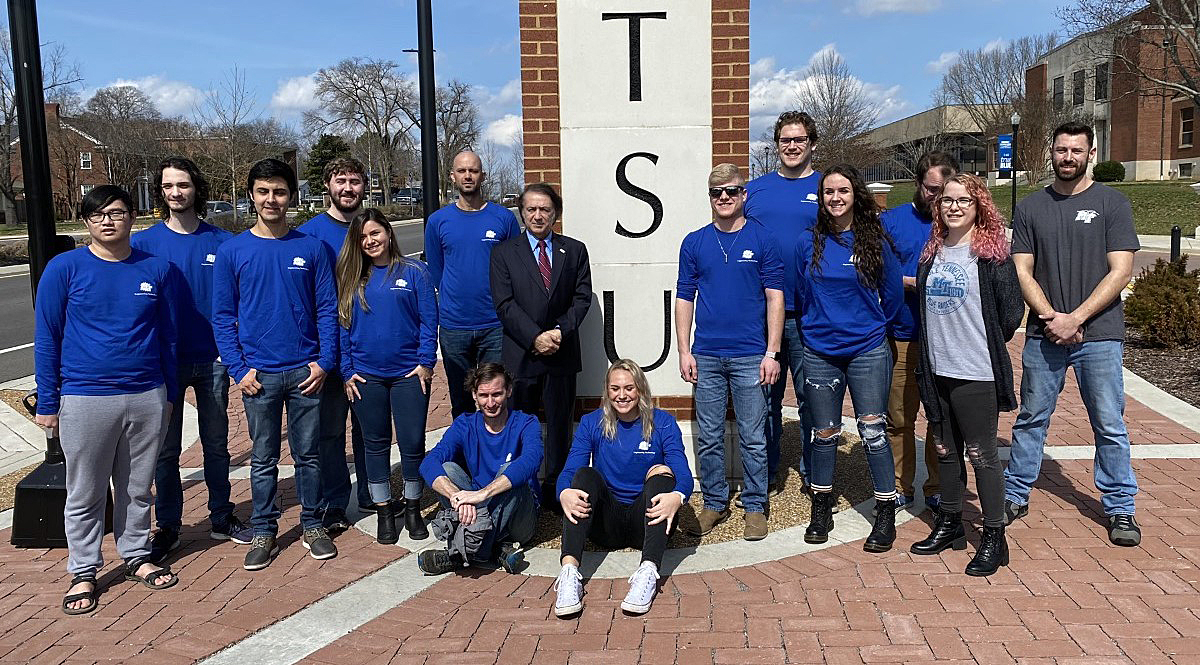 Before the 2020 NASA Human Explorer Rover Challenge was canceled, MTSU Team No. 2 members gather in February near the campus entrance for a group photo. They received the American Institute of Aeronautics and Astronautics Neil Armstrong Best Design Award in the university division for the second time since 2014. (Submitted photo)

The agency recently announced the winners of the competition during a virtual awards ceremony. The event formerly was called NASA’s Great Moonbuggy Race.

The award, named in memory of the late astronaut Neil Armstrong, recognizes the team with the rover that has the best ability to take on the punishing elements in the rover challenge course.

The Rover Challenge tasks U.S. and international student teams to design, engineer and test a human-powered rover on a course that simulates the terrain found on rocky bodies in the solar system. The teams also must perform mission tasks while negotiating the course, including sample retrievals and spectrographic analysis.

This year, because of COVID-19, NASA officials at its vast Huntsville, Alabama, operation, had universities and high schools compete by submitting written reports in high school and university categories. Judges heard teams’ presentations and they selected finalists, who were interviewed live via Zoom.

“Our students did an amazing job, considering extremely limited access to the lab following spring break and most of them having to perform their roles remotely,” said Saeed Foroudastan, the program’s director and associate dean in the College of Basic and Applied Sciences. “Their competition, as always, was impressive.”

Bud Fischer, dean of the College of Basic and Applied Sciences, said the Experimental Vehicles Program students “continue to be in a class by themselves when it comes to designing and building experimental vehicles, especially lunar rovers designed to navigate the simulated surface of the moon.”

Foroudastan said a special thanks goes to the Department of Engineering Technology, lab director and faculty member Rick Taylor and the College of Basic and Applied Sciences. 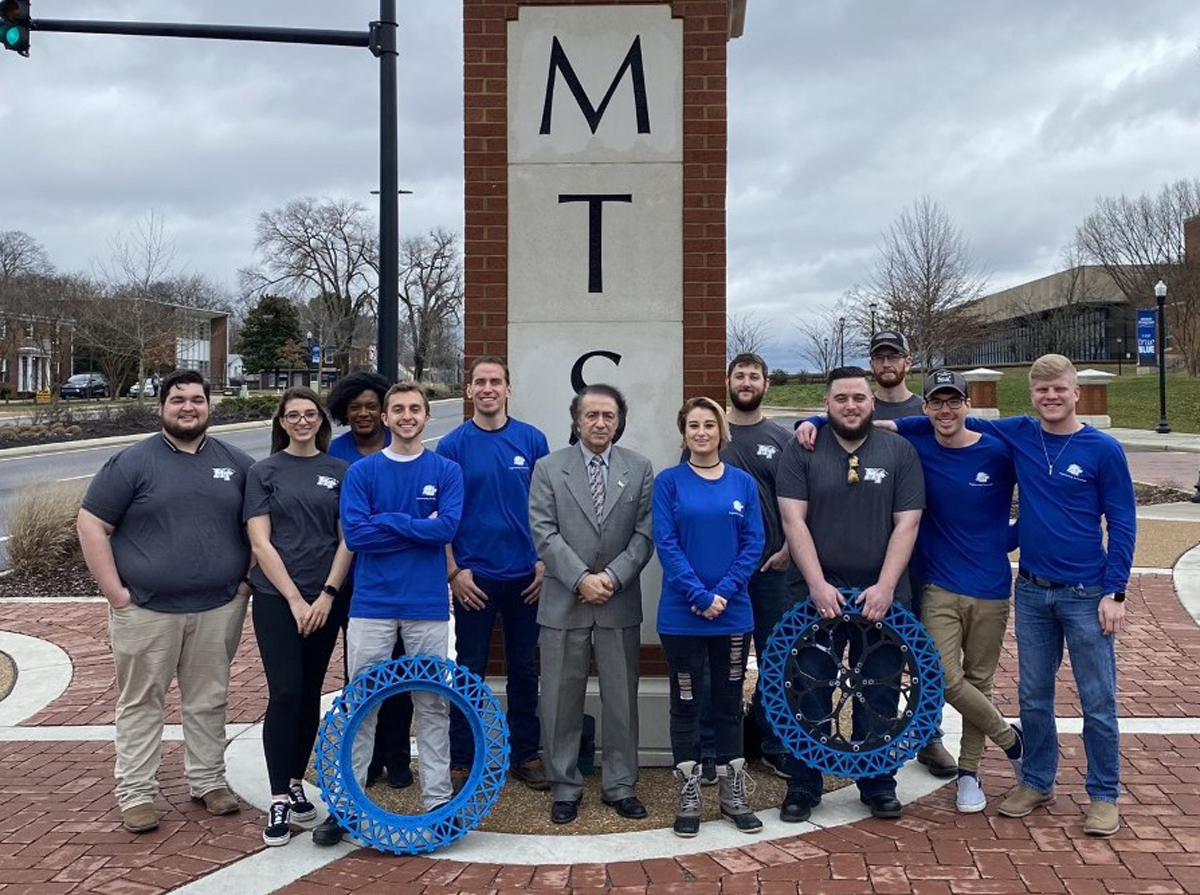 Members of MTSU’s lunar rover Team No. 1 gather for a group photo in February. Because of the popularity of the successful Experimental Vehicles Program, MTSU usually fields two lunar rover teams for the international competition. (Submitted photo)