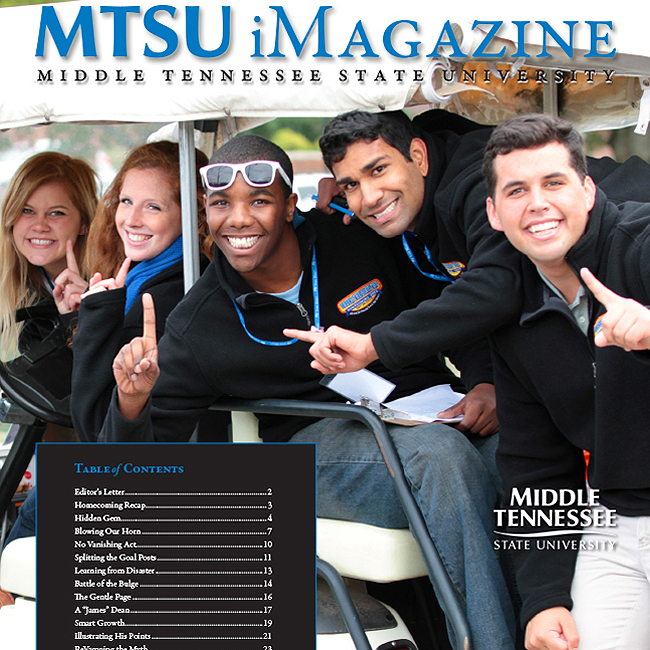 So many stories, so few pages.

Given the treasure trove of stories of achievement found throughout the MTSU campus, there are simply not enough pages in the twice-annual print version of MTSU Magazine to adequately spotlight all the significant work and accomplishments occurring on campus.

In addition, though many MTSU stories are told digitally at mtsunews.com or in the publications produced by the various colleges and departments within the university, those publications don’t always reach MTSU’s many interested supporters and shareholders.

A special, new iPad-only “mini-version” of MTSU Magazine has now been published to revisit some of those great stories and sprinkle in a few new ones. It’s an effort to keep the university’s growing web and app audiences “in the know” about all things MTSU.

From newly minted distinguished alumni to expert commentary on vampire culture in an age of “True Blood” and “Twilight,” the mini-version covers a broad swath of topics and perspectives.

Readers of MTSU Magazine may now download a free electronic mini-version replete with new content on their iPads or iPhones at https://itunes.apple.com/us/app/mtsu-mag/id531162285?mt=8.

Available through the MTSU Mag app, also available on iTunes, the electronic-only version includes stories with multimedia content that aren’t available in print.

The next print edition of MTSU Magazine will reach MTSU alumni and friends by mail in January 2013.

The full-color, glossy print magazine is distributed twice annually to approximately 105,000 alumni readers. Additional copies are distributed to interested stakeholders, including state lawmakers and members of the Tennessee Board of Regents.

The magazine also is available online at www.mtsumagazine.com.