Learn about patrolling the cyb.. 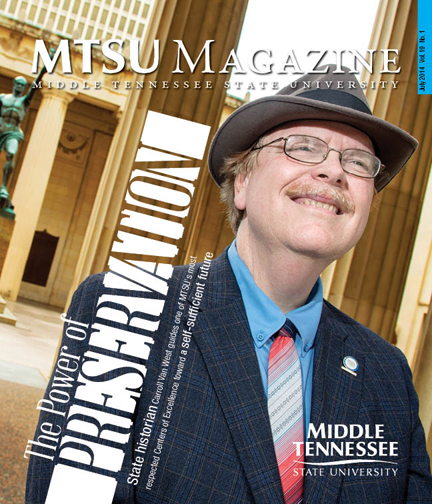 The summer 2014 edition of “MTSU Magazine” profiles MTSU professor and state historian Carroll Van West, who is well known in a field that’s as much about gaining trust as it is about preserving structures.

Since becoming director of the Center for Historic Preservation, established in 1984 by the Tennessee General Assembly as MTSU’s first Center of Excellence and one of nine original centers at Tennessee Board of Regents universities, West has established a reputation that’s helped make the center and MTSU historic preservation students familiar in places well beyond Tennessee’s borders.

Click on the image to view an electronic version of MTSU Magazine.

MTSU has experienced remarkable success through the years placing graduates in jobs in the field of historic preservation, in places of employment such as state historic preservation offices, military bases, national parks, federal agencies, historic sites and museums, preservation or cultural resources management consulting firms and departments of transportation.

It’s all part of CHP’s mission, which is not only to help Tennessee communities identify and use their heritage assets (historical sites, artifacts and narratives that tell stories of the past) but also to support and direct student research and experiential learning opportunities. Through the years, the CHP has helped communities develop historic preservation plans, historic structure reports, heritage tourism plans, National Register nominations and more. Along the way, students studying Public History at MTSU have worked alongside West and his staff, putting “boots on the ground,” as West calls it, and getting real-world historic preservation experience.

“There is no better way to learn history and develop a passion for it than to go put your hands on it,” West says. “It’s a great competitive advantage because when our students go on interviews they talk about their projects, and employers know from the get-go that they have real experience.”

Readers may also download “MTSU Magazine” free for their iPads and Android devices. The MTSU Mag app, available in the iTunes store and now at Google Play, includes special multimedia content built into every issue that’s not available in the print editions.

Printed copies of “MTSU Magazine” are distributed twice annually to more than 105,000 alumni readers. The publication also is distributed to interested community members, including state lawmakers and members of the Tennessee Board of Regents.