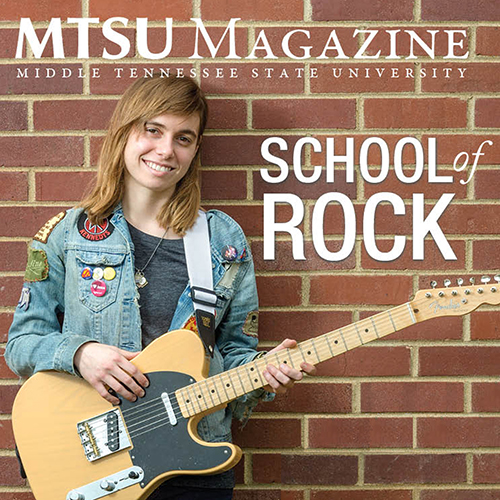 The summer 2016 edition of MTSU Magazine profiles an English major whose designs on being a classroom teacher has taken an unexpected detour after her first album lit up the indie rock world over the past year.

As an MTSU underclassman with a minor in secondary education, Julien Baker penned a batch of heartfelt songs during late-night writing sessions in the piano closets in the Saunders Fine Arts building on campus.

The subsequent album that emerged from those sessions, “Sprained Ankle,” eventually led Rolling Stone magazine to name Baker to its list of “10 new artists you need to know” in 2015.

Readers may download the latest MTSU Magazine for their iPads and Android devices through the new MTSU Mag Stand app, which replaces the previous MTSU Magazine app.

Special multimedia content is included in the digital version of the latest profile on Baker. Since the Rolling Stone magazine kudos, hundreds of media outlets have profiled her, including National Public Radio, The New Yorker and The New York Times, while scads of other music-specific outlets placed “Sprained Ankle” on their annual lists of top albums for 2015 — alongside, in some cases, names like Adele and Kendrick Lamar.

In almost overnight fashion, Baker, 20, from Memphis, achieved bona fide indie-music-darling status, a designation that has since taken her across the globe to perform her music.

What makes Baker’s story all the more remarkable is that for most of her meteoric musical rise, she remained enrolled and taking classes at MTSU; she recently announced a hiatus from her studies to concentrate on her career.

Baker’s recollections of concerts, travel agendas and promotional schedules are vividly interspersed with names of professors who saw her desire to learn amidst her rise in fame and who did everything they could to make sure her efforts to succeed weren’t in vain.

With a laser focus on student success, the university staff’s emphasis on retention and graduation is obvious in Baker’s student experience.

Baker’s ability to balance the pursuit of her degree and career opportunities offers proof that MTSU’s student success emphasis is more than just lip service.

Printed copies of MTSU Magazine are distributed twice annually to more than 110,000 alumni readers. The publication also is distributed to interested community members, including state lawmakers and members of the Tennessee Board of Regents.