NASHVILLE, Tenn. — Middle Tennessee State University and Meharry Medical College in Nashville solidified a unique academic partnership Thursday to address the state’s shortage of rural doctors by formally recognizing the inaugural class of students who have embarked on an accelerated path to become primary care physicians.

Tennessee Gov. Bill Lee joined leaders of the two institutions inside the state Capitol to present special certificates to the six MTSU freshmen who have been accepted into the Medical School Early Acceptance Program. The innovative partnership allows students to become medical doctors in seven years — the first three in pre-medical studies at MTSU, followed by four years of medical school training at Meharry. 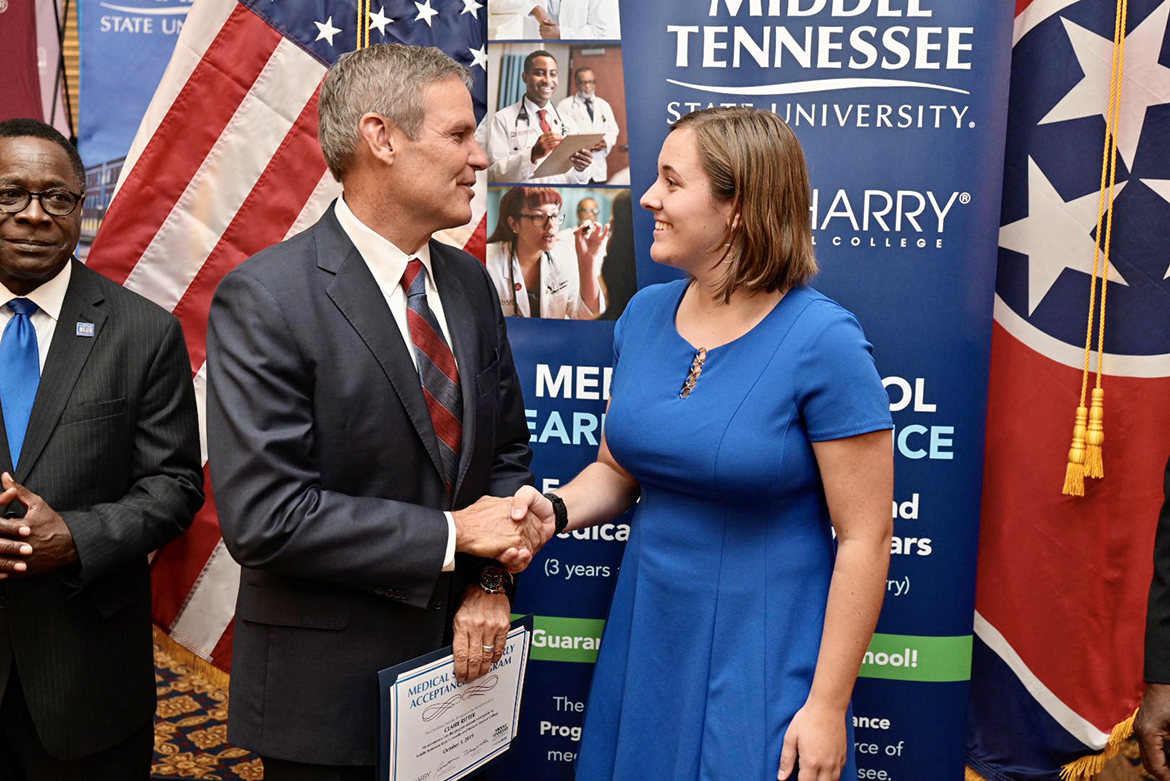 MTSU freshman Claire Ritter, right, shakes hands with Tennessee Gov. Bill Lee after Lee presented her with a special certificate Thursday, Oct. 3, in the State Capitol in Nashville. Ritter was one of six students recognized Thursday for their acceptance into the inaugural class of the Medical School Early Acceptance Program, a partnership between MTSU and Meharry Medical College to fast-track students to a medical degree in seven years through course work at both institutions. At far left is MTSU President Sidney A. McPhee. (MTSU photo by Andy Heidt)

The students, who are receiving tuition aid from the state as part of the program, will then be required to do a two-year residency in a rural part of the state.

The goal is to close the gap of primary care physicians available in rural and underserved areas and to help close healthcare disparities. Tennessee recently ranked 45th nationally in overall health outcomes.

“We can drastically improve our outcomes through programs like this,” Lee said. “I’ve been to those communities, I’ve talked to those folks, I’ve seen the situations that they’re in. This is a great opportunity for us to begin addressing that great need in this state.”

McPhee praised Lee for securing funds through the state budget to put toward student tuition assistance — funding that program supporters hope will continue, with a goal of supporting 10 fellows each year, to produce an expanding pipeline of doctors on an accelerated timeline.

“That critical funding plays a vital role in empowering our efforts to launch and sustain this joint program,” McPhee said. “It gave wings to our goal of harnessing Meharry’s and MTSU’s respective resources and strengths to fulfill the urgent demand for well-trained doctors and health professionals to ensure that all Tennesseans have access to quality health care.”

Hildreth applauded the students for achieving “something truly remarkable” by being selected for the highly competitive program, which earns them acceptance into medical school before taking their first undergraduate course in college. He said he feels the MSEAP is one strategy in addressing the state’s physician shortage, which also includes the need to preserve accessibility to health care services in rural areas.

The Meharry president noted that an optimal ratio for physician access within a community would be 1 doctor per 1,000 residents, but that some areas of Tennessee have ratios as high as 1 in 14,000. Rural hospital closures over the past several years has worsened the problem. 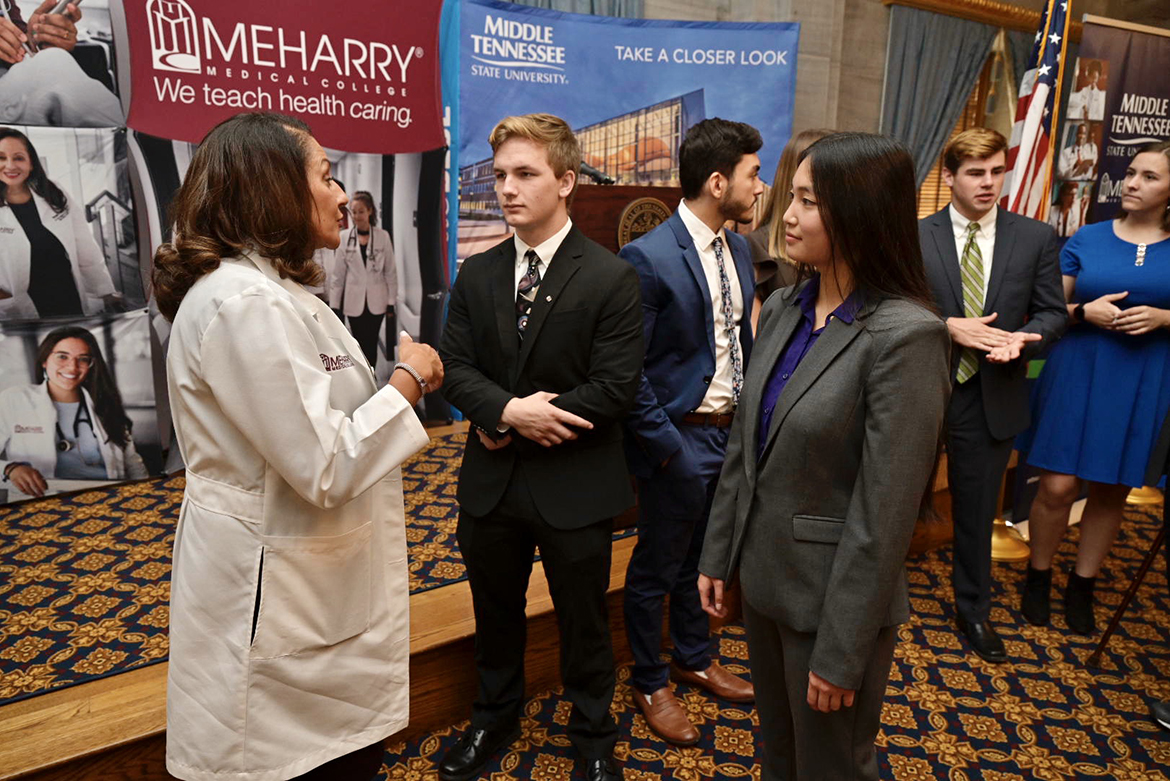 Dr. Veronica Mallett, left, dean of Meharry’s School of Medicine in Nashville, Tenn., chats with MTSU students Pierce Creighton, center, and Maria Hite at a special ceremony Thursday, Oct. 3, at the state Capitol. The students were among six recognized for their acceptance into the inaugural class of the Medical School Early Acceptance Program, a partnership between MTSU and Meharry Medical College to fast-track students to a medical degree in seven years through course work at both institutions. (MTSU photo by Andy Heidt)

“One of the ways we think we might preserve the viability of some of these rural hospitals is for them to serve as a training ground for these students once they graduate,” Hildreth said. “That’s one of the conversations we’re having right now, to identify those hospitals that are willing to be training sites for these graduates.”

In calling the partnership a great example of how higher education needs to change in a number of areas, Krause thanked the two institutions for their commitment to formalizing the MSEAP and the state for providing the necessary seed funds to get it off the ground.

“In an age where there’s a lot of cynicism about government, I hope we take today as an example that government can do some really powerful things,” said Krause.

He then addressed the students directly: “What you are signing up for right now is public service.”

MSEAP student Maria Hite of La Vergne, Tennessee, said she felt “incredible” to have been accepted into the program after first learning about the possibility as a junior at Home Life Academy.

“I was really interested in serving rural communities already, and this program just seemed like it fit with what I wanted to do already,” she said. “As physicians, we need to be where we are needed most, and that is exactly what this program does.”

Joining Hite in the inaugural class are Pierce Creighton of Lascassas, Tennessee; Curtis Dearing of Decatur; Kirolos Michael of Brentwood; Claire Ritter of Nashville; and Julianna Turner of Dyer.

Bud Fischer, dean of MTSU’s College of Basic and Applied Sciences, said the university set a rigorous application process for the students, which  included extensive application reviews and interviews by faculty members from both institutions. The educators then selected “those they thought had the maturity and intellectual commitment to go through an accelerated program and be successful,” Fischer said.

Dr. Veronica Mallett, dean of Meharry’s School of Medicine, said the students will be mentored by an established physician during their residencies in those communities “so that they know what it’s like to serve a rural community and be ready serve once they graduate from that family medicine residency.”

“Tennessee has a shortage of physicians, and many of them are retiring in our rural communities,” Mallett said. “By accelerating the education that the physicians need, they’ll be able to serve the rural communities more rapidly.”