Tennessee women of the Progres.. 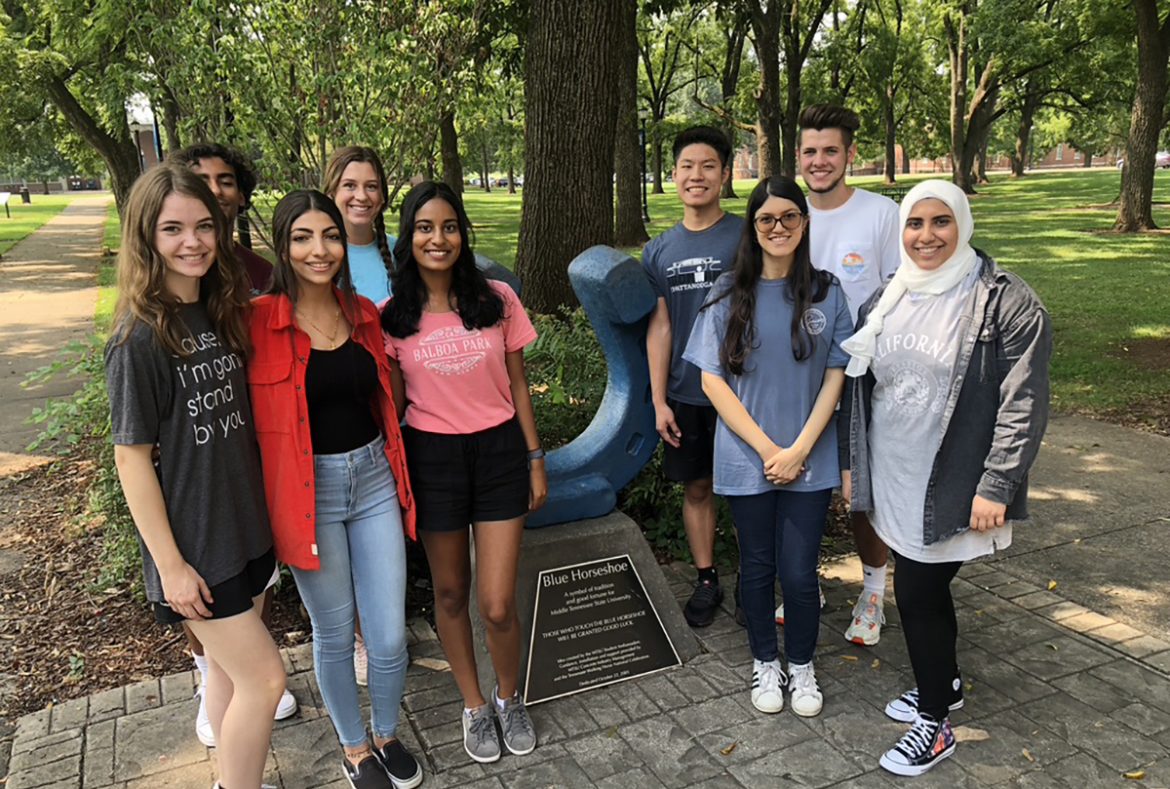 Maria Hite will be one of the first six MTSU students heading to Nashville’s Meharry Medical College to earn her Middle Tennessee State University degree — and eventually her Meharry medical degree — and set sail to become a primary care physician in a rural region in Tennessee.

A group of MTSU students who are in the Medical School Early Acceptance Program, or MSEAP, help with a Habitat for Humanity build in Murfreesboro as part of their summer bridge week at MTSU. Students spent a week at MTSU and a week at Meharry this summer, acclimating to the academic and hospital environments. (Submitted photo)

The MTSU College of Basic and Applied Sciences is partnering with Meharry Medical College School of Medicine through MSEAP. The program’s purpose is to increase the number of primary care physicians serving medically underserved populations as well as alleviating health care disparities in rural Tennessee.

Hite, Kondee and 17 others are in a seven-year early medical acceptance program restricted to incoming freshmen. It begins with acceptance into the program as an MTSU undergraduate and concludes with graduation from Meharry. By program’s end, students will earn a bachelor’s degree from MTSU in three years and doctor of medicine from Meharry in the remaining four years.

Students spent a week at MTSU and a week at Meharry this summer, acclimating to the academic and hospital environments. 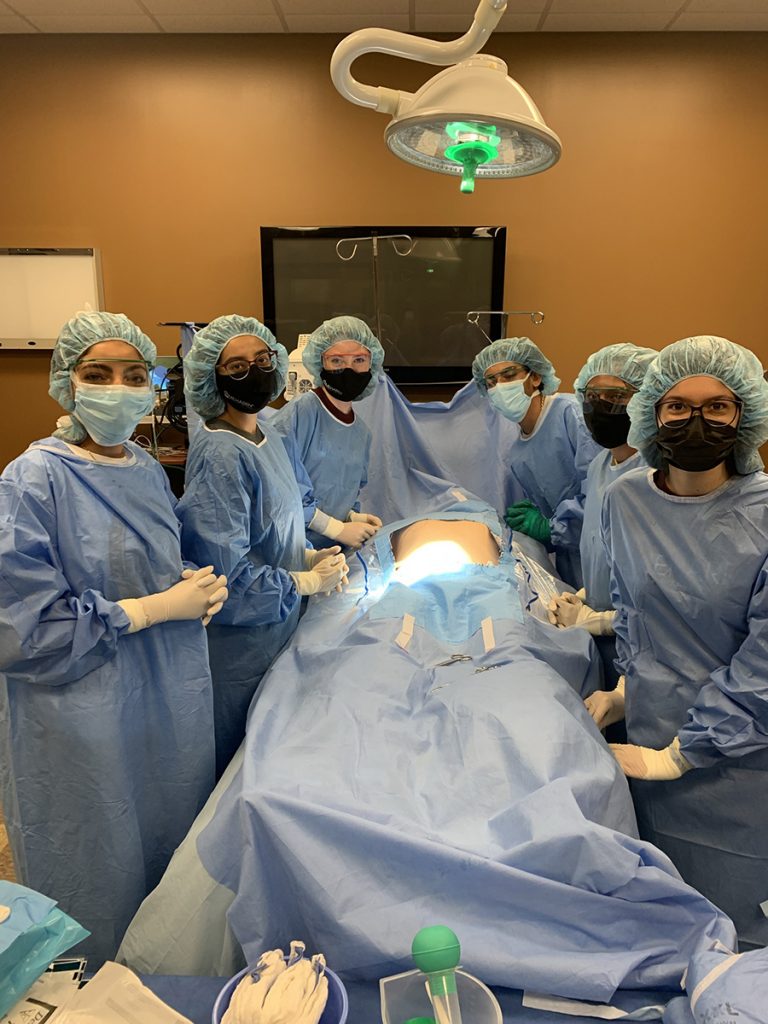 Eric Miller, advising manager in the pre-professional health science advising center, said 19 of 20 students — a 95% success rate — are on task. Hite and the original group will start at Meharry this summer if they finish their MTSU requirements and meet the minimum MCAT score.

Miller said while attending MTSU, the students do not pay tuition or fees.

“Their scholarships cover those costs,” he said. “They are responsible for such things as room, board, and books, but they also receive stipends for work they do over the summer.

“When they get to Meharry, they will receive a scholarship roughly equivalent to two years (out of four) for tuition. The actual number changes year to year but for the students that started this fall they will receive over $32,000 in scholarships per year for their four years at Meharry.”

Participants must be Tennessee residents, have scored a 28 or higher on the ACT (or SAT equivalent) and earned a 3.5 or higher in their high school course work.

The program consists of three years of study in a prescribed undergraduate premedical school curriculum and four years of medical school study. A two-year residency in primary care in a rural/underserved area of Tennessee is also required. Upon matriculation into the program, students receive conditional acceptance to Meharry’s College of Medicine. 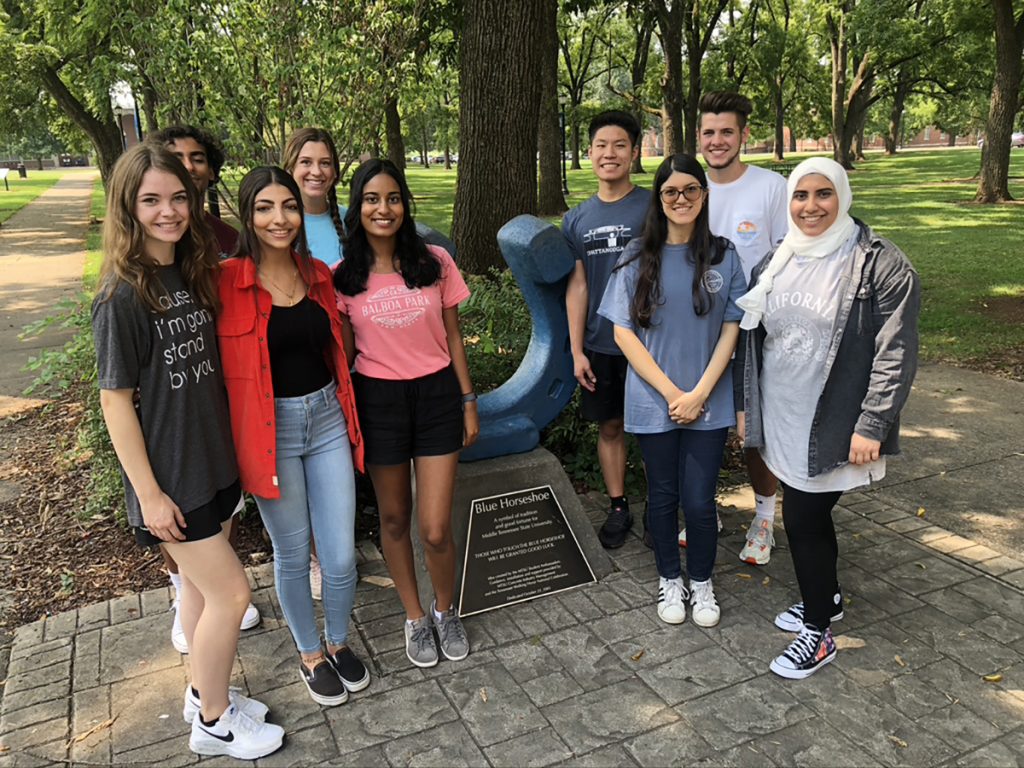 MTSU students in the Medical School Early Acceptance Program take a break during their summer bridge week at MTSU to visit the Blue Horseshoe in Walnut Grove. Nineteen students are in the program, which includes their first three years at MTSU and final four years at Meharry Medical College’s School of Medicine. (Submitted photo)

Being a competitive gymnast “sparked Hite’s interest” to want to study medicine.

“By learning skills and dealing with injuries, I became interested in how the human body worked and healed,” she said. “In high school, I got the opportunity to shadow my pediatrician. I was able to see the connections primary care physicians can make with patients.

“As a physician, I want to ensure that a person’s health does not prevent them from living their life to the fullest.”

The initial week at MTSU helped Hite, 20, who is a native of China now living in La Vergne, Tennessee, make a “smooth transition” and discover campus resources, including advisers, professors, free tutoring, writing center and more.

At Meharry’s orientation, where she’s headed in less than a year, she was able to meet medical students and faculty. “There was a strong sense of sense of mission on campus — wanting to serve the underserved,” she said.

“I saw simulation labs where students get hands-on experience by working with mannequins and running through clinical scenarios. We also learned how you might scrub in before heading to an operating room.

In three years, Hite’s “tried to embrace my college experience as much as possible. I’ve gotten involved in various clubs and organizations, and completed a virtual internship. This past summer, I was able to conduct research at Meharry that was related to the effects of diet on breast cancer development. I am currently doing biology research at MTSU and working on an Honors thesis.” 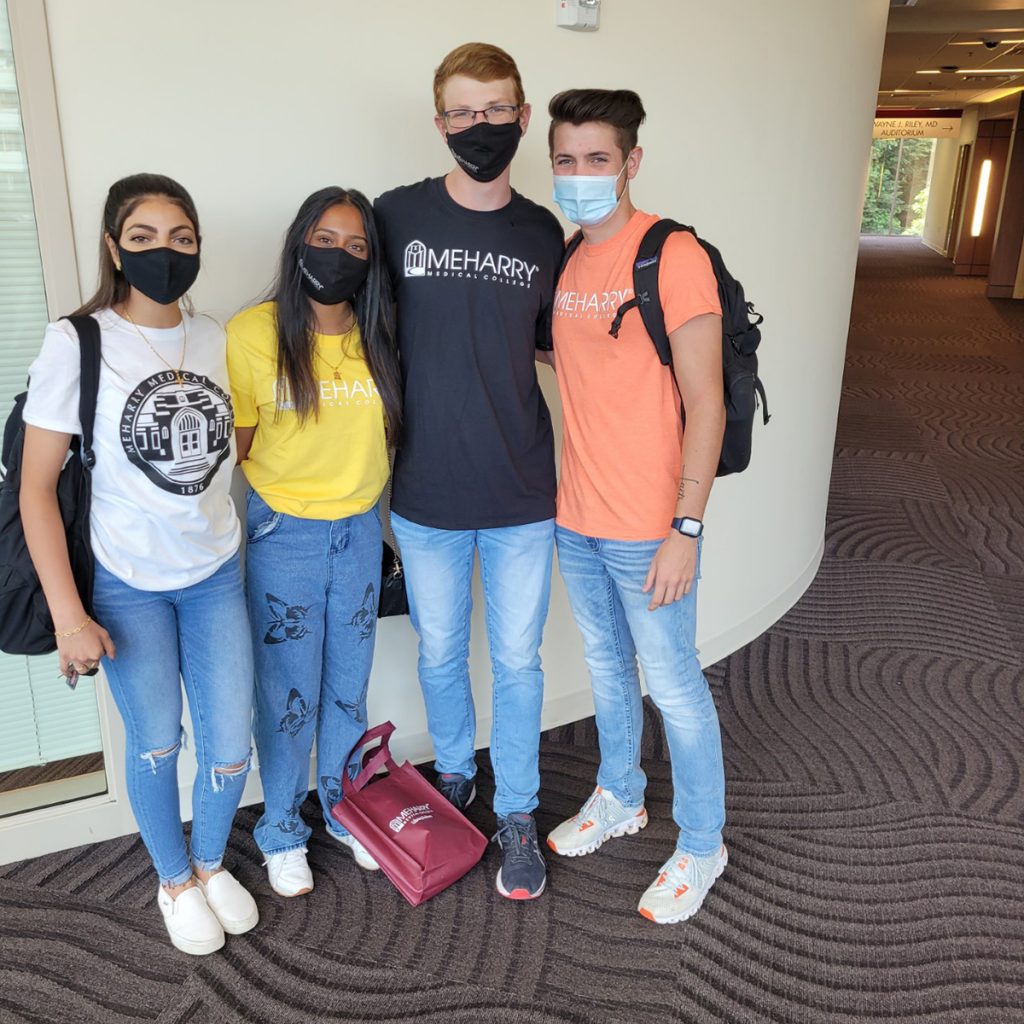 While at Meharry Medical College for a week-long orientation earlier this year, MTSU students wore T-shirts provided by Meharry. MTSU and Meharry are partnering to produce primary care physicians for rural areas in Tennessee. The first group will have finished three years at MTSU and start at Meharry in summer of 2022. (Submitted photo)

Kondee, 18, from Nashville, Tennessee, grew up hearing stories about her great-grandfather who was a primary care physician in India.

“I have seen the impact physicians have had on myself and my family members, and this really inspired me to go into medicine,” she said.

Highlights of Kondee’s summer bridge week at MTSU highlights included a Habitat for Humanity build, “which was awesome because we spent time together while helping the community,” she said. “One of my favorite activities was the Escape Game. We broke into two teams and raced to see who could get out the fastest. … I truly felt l was a part of the (program) family.”

Hearing from Dr. James Hildreth, Meharry’s president, Dean Digna Forbes and other faculty, Kondee said she appreciated “how we were introduced to people who could guide us. We were able to ask questions and really visualize where we will be in a few years. We got to sit in on a lecture, tour the research labs, hear from medical students as well as clinicians, and do exercises in the simulation lab.

“Everyone at Meharry was so friendly, and we were even more excited at the prospects of our futures. My favorite experiences were touring the cadaver lab, partaking in a simulation of someone giving birth, and learning how to scrub.”

Kondree said she has enjoyed getting to know her fellow freshmen, plus those second and third year pre-med students.

“Everyone is so quick to help and advise, and the support I have received from my peers, as well as Mr. (Eric) Miller and Ms. (Kimberly) Stephens is immense,” she said. “I have a lot of classes with other MSEAP students, and it really comforts me to know I have this amazing group of people to hold on to and rely on as we work toward our goals together.” 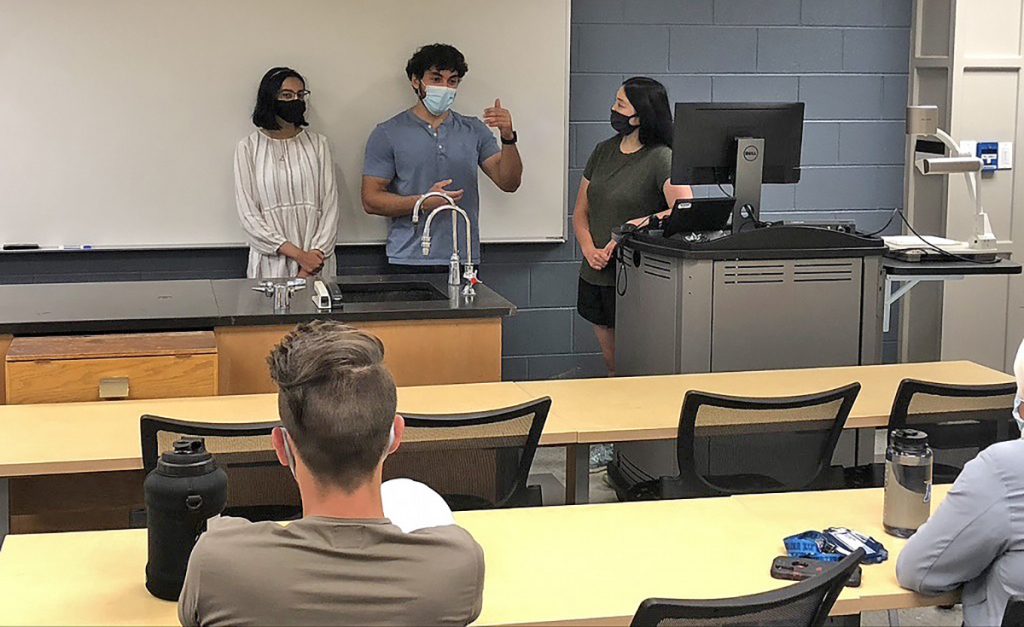 Three of 19 MTSU students in the Medical School Early Acceptance Program — a partnership with the Meharry Medical College School of Medicine — share in a classroom setting. They are in a program to help increase the number of primary care physicians serving medically underserved populations as well as alleviating health care disparities in rural Tennessee. (Submitted photo) 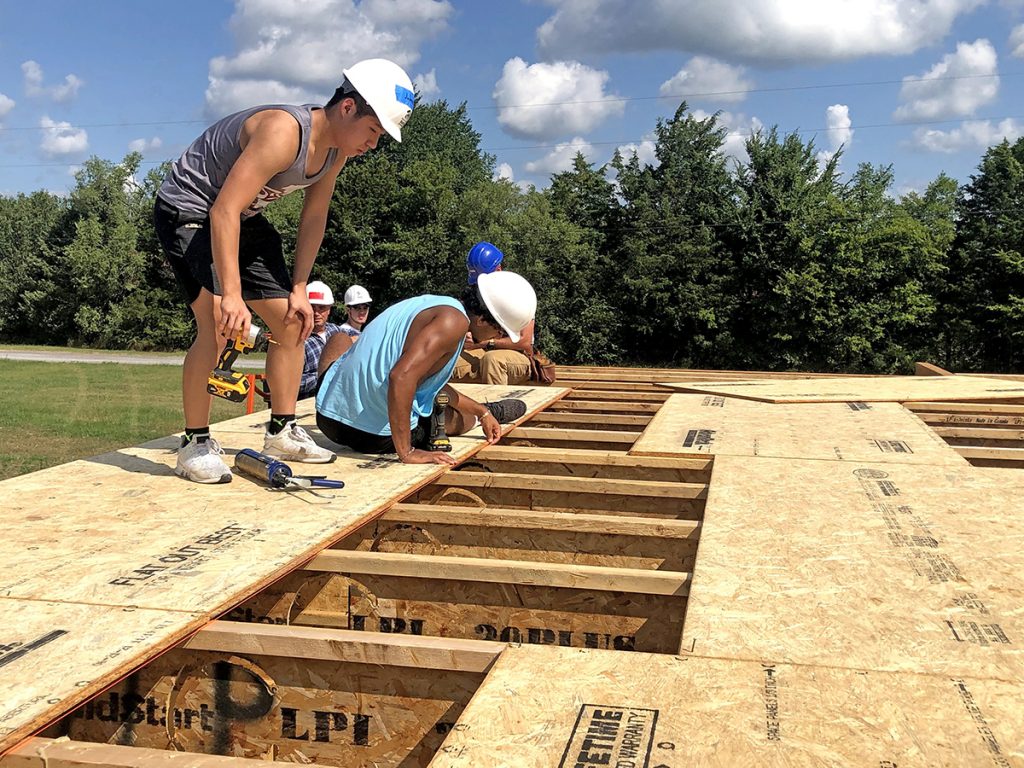 MTSU students in the Medical School Early Acceptance Program, or MSEAP, helped with a Habitat for Humanity build in Murfreesboro as part of their summer bridge week at MTSU. Nineteen students are in the program to help increase the number of primary care physicians serving medically underserved populations as well as alleviating health care disparities in rural Tennessee. (Submitted photo)