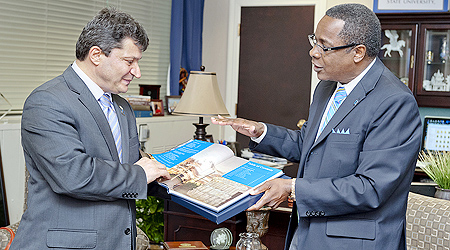 The leaders of Middle Tennessee State University and Meliksah University in Kayseri, Turkey, met in Murfreesboro on June 25 to finalize an academic and cultural exchange between the two institutions that would begin as early as the spring of 2013.

MTSU President Sidney A. McPhee, right, and Dr. ResitOzkanca, rector of Meliksah University in Kayseri, Turkey, meet Monday in McPhee's office to finalize an academic and cultural exchange that would allow third-year students from Turkey to finish their studies in Murfreesboro and earn degrees from both institutions. (MTSU photo by J. Intintoli)

Meliksah, founded in 2008, is one of four universities serving the Anatolia region of Turkey. The private university, with an enrollment of about 2,000 students, is known as a research center with an emphasis on mechanical engineering, science and economics.

The agreement between MTSU and Meliksah would allow third-year students from Turkey to finish their studies in Murfreesboro and earn degrees from both institutions. It also will allow for faculty and staff exchanges and cultural opportunities between the two universities.

“We hope to sort this agreement out as soon as possible,” said Dr. Resit Ozkanca, rector of the Turkish university. “Our vision is to take this cooperation to the highest levels, be flexible and apply our mutual strengths to the benefit of our students.”

The agreement being forged with MTSU would be the strongest of Meliksah’s international pacts, Ozkanca noted.

“We envision strong cooperation with Middle Tennessee State University,” he said. “This friendship and cultural exchange will benefit both undergraduate and graduate students as well as our faculty.”

MTSU President Sidney A. McPhee said the Murfreesboro university has worked to strengthen its international initiatives in the past decade. Its academic master plan calls for MTSU to increase its ties abroad so students can learn to live and work within a global network.

“We are honored to work with Meliksah and believe our agreement will be beneficial to both of our universities,” McPhee said. “The benefits that come from the development of such partnerships are tremendous and I am proud of our university’s work and result in forging these ties.”

The delegation from Meliksah is on a 10-day visit to the United States, also stopping in New York and New Jersey before returning to Turkey.