MTSU library peers into ‘The A.. 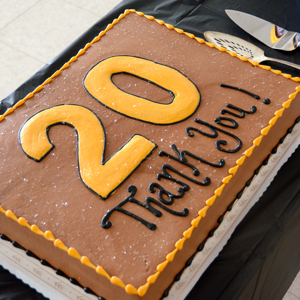 U.S. Army Lt. Col. Joel Miller got a sweet surprise on campus recently in celebration of his 20th year in the Army.

U.S. Army Lt. Col. Joel Miller cuts cake in celebration of his 20th year in the Army during a surprise party for him held May 28 at Forrest Hall. (MTSU photo by News and Media Relations)

Miller, chair of the Department of Military Science and a professor, arrived for what he thought was a morning meeting May 28 in the Forrest Hall Library to find a decorated cake, ice cream and a host of well-wishers there to celebrate his milestone.

Behind the festivities was Miller’s new wife, Dr. Hilary Miller, manager for recruitment and resources for the MTSU College of Liberal Arts.

Dr. Patrick Richey, an assistant professor in speech and theatre, read a congratulatory letter from Dr. Robb McDaniel, a political science associate professor, who wrote that “20 years of Joel in the Army is 20 years of the Army getting better.”

As military science department chair, Miller oversees MTSU’s Reserve Officer Training Corps, more commonly known as the ROTC program, which was established at the then-Middle Tennessee State College in 1950. More than 1,300 Army cadets have gone on to successful military careers.

Miller spent two 12-month tours in Iraq as part of Operation Iraqi Freedom and was part of the peacekeeping operations in Bosnia. Miller has been awarded the Bronze Star, Meritorious Service and Army Commendation medals.

This slide was among those shown at Lt. Col. Joel Miller’s surprise party May 28 at Forrest Hall.