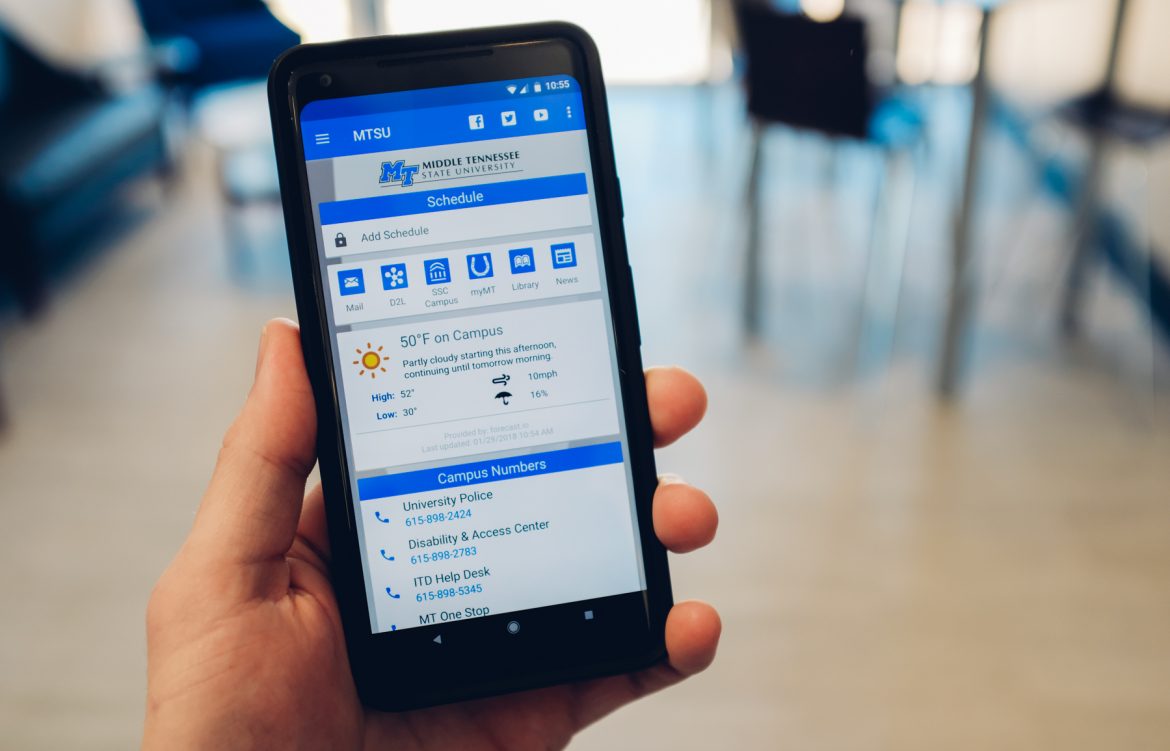 You have parked on the east side of the MTSU campus in the Rutherford Boulevard lot across from Greek Row. And you’re wondering: How much longer before the Raider Xpress bus arrives?

Actually, there’s an added feature to the MTSU Mobile app — developed by students for students — that lets users know where the buses are on their campus routes.

The app, which can be downloaded  at www.mtsu.edu/mobile, also provides maps to classrooms, offices, MT Dining locations and other campus points of interest.

To use the system:

You also can view the buses running their routes  in real time at http://mtbustracking.mtsu.edu.

“This app will be most beneficial to MTSU students,” said Chelsea Rath, who led the development team for the project. “They are the majority that ride the buses across campus, but that’s not to say that visitors and faculty won’t get use out of it as well.”

Rath said the MTSU Mobile app gives students, employees and visitors an excellent way to know when buses will arrive at particular stops.

Students, faculty, staff and MTSU visitors can now track Raider Xpress buses in real time on their computers, too. Click the image above to visit the site.

“We won’t have to stand outside in the cold, heat or rain waiting and wondering when the bus will arrive and if we will make it to class on time,” she said.

Rana Heidari of Nashville, a sophomore international relations major, said she uses the mobile app primarily for maps “because I am a transfer student (from Nashville State Community College) and don’t know where anything is. It’s really useful to know where I am (on campus) and where I need to be.”

Ron Malone, assistant vice president for events and transportation at MTSU, said everything has turned out well since the initial bus-tracking proposal arose in January 2012 and the design team hurdled “a few large challenges” along the way.

“This app also improves a student’s ability to remain safe while waiting in a perimeter lot, because they now can remain in their locked car until the app shows that their shuttle is approaching,” Malone said.

“Service will be improved because our office can now monitor the locations of the buses on the routes and radio route adjustments to the drivers when we see they are beginning to stack too closely to remain efficient.”

For other questions or comments about the MTSU Mobile App or its new bus tracking system, contact the Mobile Development team at mobile.dev@mtsu.edu.