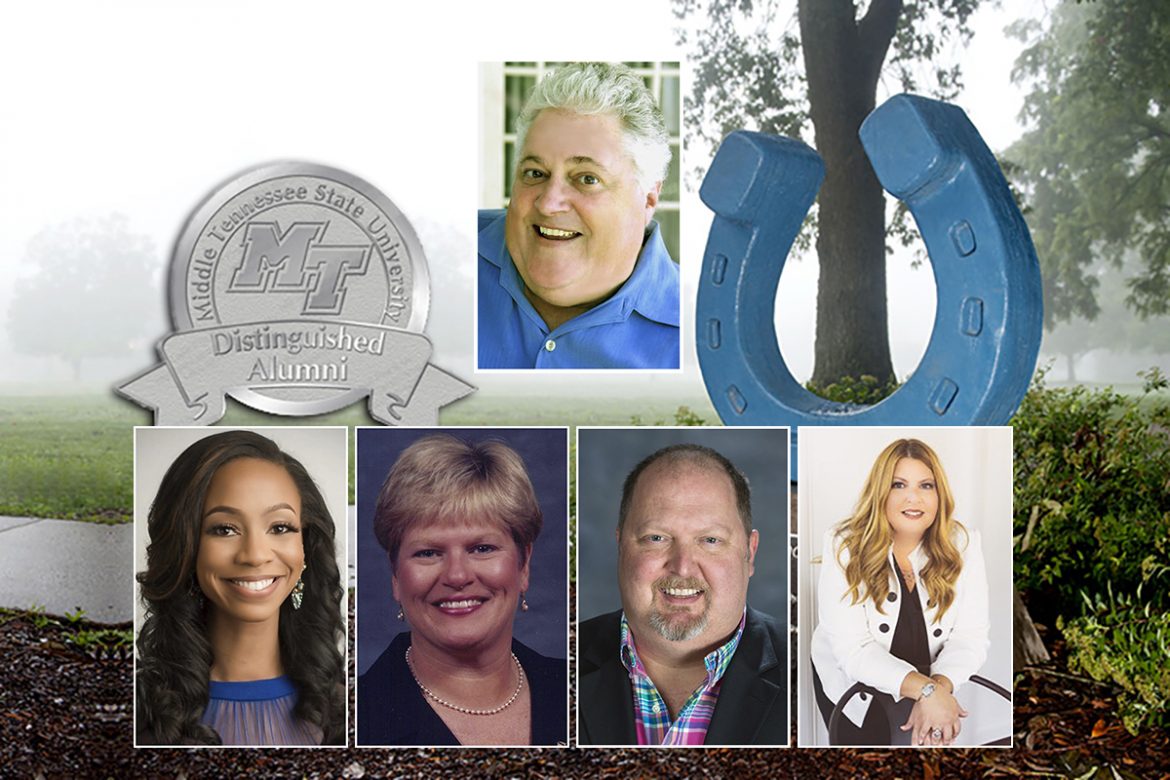 This year’s recipient is Pat Duke of Murfreesboro, Tennessee, whose voice has been heard far and wide on many food and beverage commercials, Super Bowls, television shows, animation films and video games.

This year’s Young Alumni Achievement Award, given to a graduate age 35 or younger making a positive impact in the world, goes to LaShan Dixon, a Murfreesboro resident with four MTSU degrees, who helps improve the quality of life in the community as an administrator for the Rutherford County Health Department. 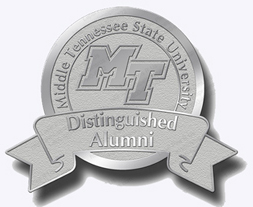 For the seventh consecutive year, True Blue Citations of Distinction are being awarded. Categories and this year’s honorees include:

• Service to Community — Ladawna Parham, of Murfreesboro, CEO of Nourish Food Bank in Murfreesboro since 2013 and in nonprofit management for more than 15 years.

The Alumni Association hopes to recognize them with an in-person event in spring 2021.

Born into a musical family, Duke began a recording career at age 13. While at MTSU, he worked at Opryland theme park, singing in shows. On campus, he performed in theatrical productions, was the student leader of The Blues Crusade, MTSU’s Big Band and formed a legendary musical group, Contraband. His degree was in music theory and composition. After graduating, he found work for Audio Media on Nashville’s Music Row, writing, producing and playing on thousands of recording sessions.

A Nashville native now living in Murfreesboro, Duke thrived in Music City as a successful studio singer, musician, producer and Emmy Award-winning composer. He has performed on stage and in studio with superstars Celine Dion, Michael Bolton, Gladys Knight and Josh Groban.

He moved to Chicago to continue his music career and sing on national commercials — more than 10,000 and counting. He has voiced seven Super Bowl spots, one earning the prestigious Promax BDA Award for best voice-over among various awards. He has been a narrator for “Swamp People” for 12 years, four National Geographic programs, ESPN’s “NASCAR Memories” and more. He has been the voice of Kellogg’s Krave cereal, Miller Lite and Coors, KFC, NAPA Auto Parts , Kool-Aid Man and many others, plus his voice has been a part of video games and animation and film.

Colleges of Behavioral and Health Sciences and Liberal Arts

Dixon uses her many skills developed at MTSU in her personal, professional and pageant world. She is assistant public health director for the Rutherford County Health Department. In 2017, she received proclamations from Murfreesboro City and Rutherford County mayors who proclaimed Dec. 4 as “LaShan Mathews Dixon Day” for her professional and personal commitment to improving the quality of life for community residents. She is founder of Walking With a Purpose and co-founder of H.O.P.E. (Helping Other People Excel Every Day) with her husband, Lamar Dixon, and daughter, Londyn Dixon.

Dixon is very active in a number of community organizations, including graduate adviser for the Eta Psi Chapter of Alpha Kappa Alpha Sorority Inc. at MTSU, board examiner for the Tennessee Center for Performance Excellence, Resolutions Committee chair of Tennessee Public Health Association, board member of the Prevention Coalition for Success Committee and Heart of Tennessee American Red Cross and member of the Community Wellness Council of Rutherford County.

A former MTSU adjunct professor, Dixon has been a Rutherford County community leader for the past 10 years, hosting multiple events while contributing toward several grants for women and underserved populations.

Odie Blackmon (Class of 1995), College of Media and Entertainment

Blackmon is regarded as one of Nashville’s most talented and diversified creative forces. On Music Row, he is a Grammy-nominated songwriter with more than 31 million units in combined sales across multiple genres and the Country Music Association’s 2005 Single of the Year (“I May Hate Myself in the Morning”) to his credit, as well as a successful producer and publisher. His songs have been recorded and performed by artists including Lee Ann Womack, John Legend and Martina McBride, and No. 1 hit singles by Gary Allan and George Strait.

Blackmon, an associate professor, is a popular teacher in the Department of Recording Industry, whose innovative approach is helping to launch a new generation of songwriters and musicians in their own careers. He is the department’s Songwriting Concentration coordinator, raising $40,000 in funding for the program’s growth. He was awarded the Outstanding Faculty Award from MTSU’s Experiential Learning Scholars Program in 2016, the Distinguished Creative Activity Award from the MTSU Foundation in 2017 and Experiential Education Rising Leader Award from the National Society of Experiential Education in 2018.

After previously holding a seat on the board of the Music and Entertainment Industry Educators Association, Blackmon is a board member for the Association for Popular Music Education in addition to serving on the Library of Congress/U.S. Copyright Office’s mechanical licensing collective.

Hood retired in 2011 after directing Overton’s band for parts of four decades, and serving as band director at Giles County High, Wright and Bellevue Junior High and Bellevue High School before that. Overton’s football stadium field was named “Jo Ann Hood Field” after her retirement. She guided the band to two Fiesta Bowl Parade events, the Tournament of Roses and Macy’s Thanksgiving Day parades, plus representing the USS Tennessee and state of Tennessee at three commemorations of the bombing of Pearl Harbor, with performances at the Arizona Memorial, the USS Missouri and Waikiki Holiday Parade.

In a distinguished music education career, among her honors was induction into the MTSU Band of Blue Club Hall of Fame in 1986, selection as an Outstanding Young Woman in America in 1987, serving on the jury for the John Philip Sousa Foundation Sudler Shield Award and serving on various executive and advisory boards.

Since retiring, Hood has been an adjunct faculty member at both MTSU and Tennessee State University, supervising music student teachers, and works with the Metro Nashville Public Schools Side By Side mentoring program. She serves extensively as an adjudicator and clinician of marching and concert bands.

• Service to the Community

Ladawna Parham (Class of 1998), College of Media and Entertainment

Parham’s role as CEO of Nourish Food Bank is far removed from a former journalism career in East and Middle Tennessee, where she earned numerous accolades, eventually pursuing her passion for supporting nonprofit and community efforts to aid those in crisis in management positions for many years.

While at Nourish, Parham has grown the food bank to include multiple sites, offer more than 400,000 meals annually, partner with dozens of organizations to address food insecurity across the region and create a network of support to ensure the longevity of the agency’s reach. When not at Nourish, Parham, who also has a master of education in nonprofit management degree from Belmont University, works in real estate with Advantage Realty of Middle Tennessee.

Parham is a Leadership Rutherford graduate, Rutherford County Chamber of Commerce diplomat, member of Junior League of Murfreesboro and Rutherford CABLE, co-founded Spread the Positives Women Nourishing Our Community Series to honor local women making a difference and is on the Rotary Club of Smyrna board of directors.

A mother of two sons, Parham has been recognized as one of the Top 10 Women in Business by Murfreesboro Magazine and Nashville Lifestyles and one of VIP Murfreesboro’s Leading Ladies for her work to empower women and inspire her community. She is a 2020 ATHENA Awards nominee.