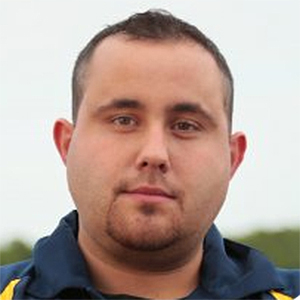 He’s focused his lens on the boulevards of Nashville and the streets of Florence, Italy, so the logical next step for newly minted MTSU grad Phillip Dixon of Goodlettsville, Tennessee, was underwater.

Dixon, who just received his bachelor’s degree in electronic media communication from MTSU in May, is currently aboard the Exploration Vehicle Nautilus, a 64-meter research vessel operated by the Ocean Exploration Trust, as a video intern on the 2014 expedition season in the Gulf of Mexico.

The ship is equipped with remotely operated vehicles, or ROVs, that can explore the sea floor and send back live video via satellite feeds for remote science education. There’s also a live studio on board the E/V Nautilus to allow interactive interviews, and Dixon was the subject of one Tuesday afternoon as the ship approached Gulfport, Mississippi.

“As soon as I found out about it, I didn’t waste any time applying for it,” Dixon said of the internship opportunity, where he joins longtime EMC professor Mary Nichols, a veteran member of the Nautilus’ video engineering crew.

“I’ve never been on a ship before, and I’m prone to motion sickness,” he explained. “The first day was pretty bad, but since then I’ve been fine. I enjoy being out here.”

While he’s aboard through July 5, Dixon’s tasks include installing, wiring and routing cameras and monitors all throughout the ship and operating the remote cameras on the ROVs.

Interns aboard Nautilus clearly “do much more than make tea and coffee and scrub the floor. They’re right up top in all the action,” said Nia Hâf Jones, the science communication fellow on the Nautilus and the marine awareness officer at North Wales Wildlife Trust, headquartered in Bangor, Gwynedd.

“I could leave this ship right now and have a bigger knowledge base than I ever had,” added Dixon, whose knowledge base already is quite extensive. He recently completed an internship at NewsChannel5 Network and worked with MTSU’s EMC Productions, where he most recently served as director for music event coverage.

Larry Meyer, right, director of the Center for Coastal and Ocean Mapping/Joint Hydrographic Center in Durham, New Hampshire, goes over the game plan for the cruise leg on board the E/V Nautilus with the Corps of Exploration. MTSU alumnus Phillip Dixon is listening second from left by the window. (Photo by the Ocean Exploration Trust)

Dixon also directed “Streets of Florence,” a short documentary shot for an EMC study-abroad class that took the “Best Artistic Direction” prize at the 2013 ArtLightenment Film Festival and was screened at the 2014 Nashville Film Festival. He’s prepping it now for more festival entries as well as for possible public television broadcast.

“One of my classes at MTSU was video engineering — most schools don’t even offer that — and the teacher had a list of stuff that he said he needed to learn on his first job, and he used that to teach us,” Dixon said.

“Being on the Nautilus is great because you learn everything from top to bottom, from putting the camera in to operating it, so it’s a great importunity for anyone who wants to do video engineering.”

Professor Nichols echoed Dixon’s comments during an unexpected live appearance Tuesday evening, when Jones and another crew member, research assistant Mackellar Violich, convinced her to step from behind the camera and chat for a moment.

“I have a skill that’s useful out here, and there’s so much technology on this boat. I’m not the engineer who put it in, but I’m the grunt who … knows where all the bones are buried,” she joked of her duties on Nautilus. “It’s helpful that they don’t have to break somebody new in every time.

Nichols, a respected documentarian and video engineer, is retiring at the end of this academic year after 23 years with MTSU. She’s taught video production, media law and multi-cam truck production at the university and is in her 16th year of working with Nautilus expedition leader Dr. Robert Ballard, renowned for discovering the wreck of the Titanic as well as the German ship Bismarck.

One of the ship’s stops was of special interest to Dixon. This Nautilus Gulf of Mexico trip included dives on the wreck of the German U-boat U-2513 in the deep waters off southwest Florida known as the Dry Tortugas.

“My favorite experience so far was the U-boat yesterday (June 16), which also was the hardest day,” he said. “During the dive, the iris control on the video controls how bright it looks, and we wanted a certain level to get a good consistent picture. We had clouds going in and out, and I was having to constantly bring the light up or bring it down to show want we wanted!

“Shipwrecks and submarines underwater are really cool to me, though, so I was happy it was on my watch, even though it was a tough job. The thing for me is capturing great images, things that haven’t been seen before or might not be seen again.”

You can watch the Ocean Exploration Trust video from the Nautilus’ discovery of the U-2513 below.