MTSU shares how to spread info.. 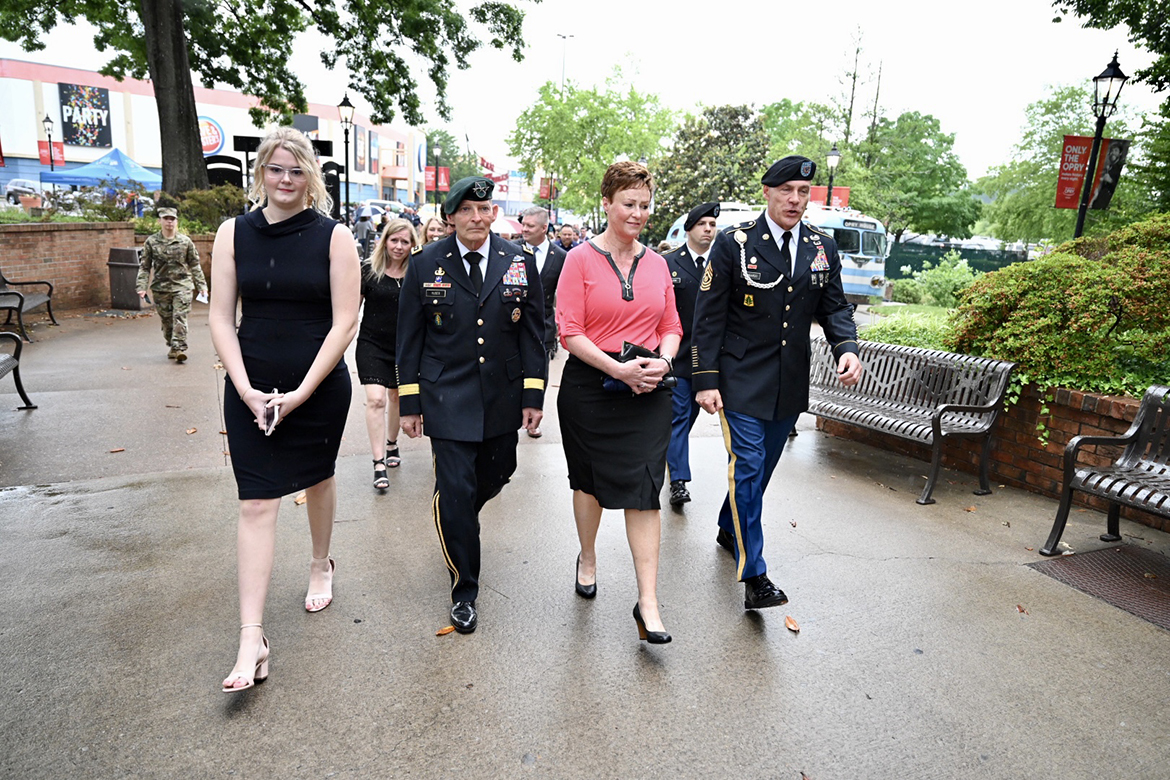 A decorated and distinguished U.S. Army leader with offices at both the Pentagon and Fort Bragg, North Carolina, spent four hours at MTSU this week discovering all that the university provides for its student veterans.

Middle Tennessee State University made a positive, lasting impression on Command Sgt. Maj. Andrew Lombardo of the Army Reserve during a Tuesday, May 24, visit to campus with three support staff members. As the Army Reserve’s top enlisted soldier, Lombardo advises the commanding general and other senior Army leaders on regulations, policies and quality of life issues related to nearly 200,000 Army Reserve soldiers serving around the world.

He then shared a meal with more than 30 NCOs from Army Reserve units from across Tennessee, as well as area civilian Army Reserve Ambassadors. He then joined MTSU President Sidney A. McPhee, first lady Elizabeth McPhee and other Daniels Center and MTSU administrators for the sold-out Grand Ole Opry’s Salute to Troops annual show honoring veterans.

Lombardo, who has spent 37 years serving his country, also had an opportunity to reconnect with Keith M. Huber, MTSU senior adviser for veterans and leadership initiatives, as both served together in Afghanistan. Huber retired after a distinguished 38-year Army career.

Huber introduced Lombardo to the Opry audience Tuesday night, where Lombardo was given “the opportunity to represent the United States Army Reserve in the Grand Ole Opry’s Salute to Troops. They’re incredible supporters of troops. We have 3,500 citizen soldiers that work in Tennessee, so it’s just one small way that I can contribute telling the Army Reserve story.”

The Opry brought Lombardo on stage and presented him with a commemorative plaque as a guest announcer, acknowledging his visit. Looking on from the audience and seated with him and Huber during the show were Hazel Daniels and son Charlie Daniels Jr. Performer and former MTSU student Craig Morgan closed out the show.

MTSU’s Daniels Center is home to 1,100 student veterans and family members, providing numerous services. It is the largest and most comprehensive veterans center on any Tennessee higher education campus — a one-stop shop to meet a variety of academic needs. Two full-time VA personnel work in the center.

Lombardo said he was impressed by the university’s commitment to student veterans and their families.

“My (initial) impression is how this facility has embraced the concept of citizen soldier and veterans pursuing higher education, whether it be a bachelor’s degree or graduate degree,” Lombardo said. “The fact the university has created the Daniels Center as a space for veterans to be able to utilize their educational benefits to further their education is a testament to their commitment, to help transitioning military members transition to civilian society and become full citizens.”

Huber, who retired from the Army as a lieutenant general, said it was “a privilege” to have Lombardo visit MTSU “and to make him aware of what MTSU supports from what we do at the Charlie and Hazel Daniels Veterans and Military Family Center.”

“He and I served together in Afghanistan and during some very difficult times. I have a great deal of respect and affection for him.”

During the luncheon in the Tom H. Jackson Building’s Cantrell Hall, which followed an outdoor group photo and visit with officials in MTSU’s Criminal Justice Administration Department, Huber told the audience to “never underestimate the significance of what you do.”

Lombardo said he was “pleased to see the university has a Reserve Officers Training Program. Of course, it’s important that we’re able to continually provide the services with competent leaders to lead our organizations. … The staff in general were very military friendly.”

Lombardo, his staff and the ROTC leaders — Capt. Daniel Lowe, recruiter Marty Hill, 2nd Lts. Michael Maynard and Tahseen “Mike” Samo — discussed the program at length. As he did the entire time he was on campus, Lombardo showed a sincere interest in learning about the program’s growth.

Regarding what Huber and university leadership have been able to accomplish through the Daniels Center, Lombardo said “the military’s an organization of cohesive teams that are highly trained, disciplined and fit, and our bonds stay strong. They don’t leave us when we leave military service, so that’s why Gen. Huber and I remain in touch. It’s the cohesiveness and discipline that are required for our service in order to successfully defend our country that makes us a unique organization.

“Leadership has no bounds, whether in the military or in a private corporation or in a university setting. Gen. Huber has received some of the best leadership training both academically and technically. His leadership acumen, whether it’s leading soldiers or leading large-scale organizations, fits incredibly well into a university lifestyle and, more so, he provides … real-life practical examples of applying leadership out in the field and that whole cooperation with either private industry or the military services and academia is complimentary … so he’s absolutely fitting for this role. I’m glad the university chose him to run this program.”

Lombardo was later presented a framed photograph showing the the Reserve NCOs, Army Reserve Ambassadors and others gathered at the MTSU Military Memorial before lunch.