Show your shirts to raise sexu.. 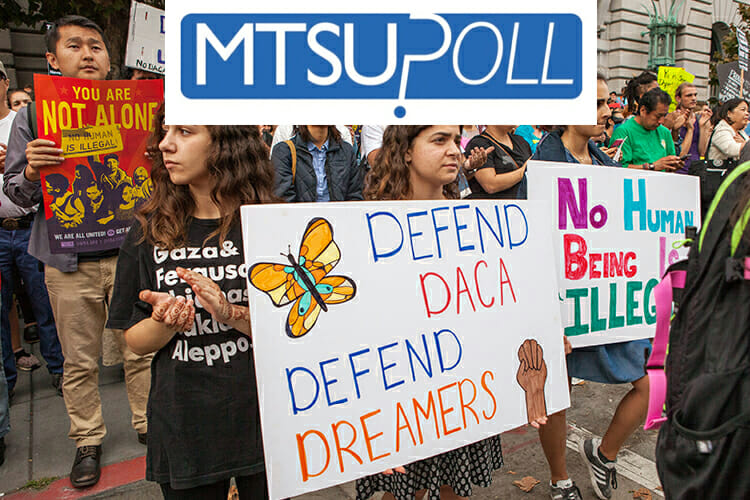 Solid majorities of Tennessee voters express support for immigrants in the country illegally, especially the so-called “Dreamers” who were brought to the country as children, according to the latest MTSU Poll.

In other results that may raise eyebrows, a broad majority of Tennessee voters support at least limited marijuana legalization. Even 51 percent of self-identified evangelical Christians surveyed say they support legalization for medicinal use.

When asked about people who immigrated to and are currently living in the United States illegally:

When asked about immigrants who were brought to the U.S. illegally as children — some of whom qualify under the currently contested Deferred Action for Childhood Arrivals, or DACA, policy and who are sometimes referred to as “Dreamers”:

Views on immigration track closely with opinions on President Trump. Fifty-one percent of those who approve of the job Trump is doing as president say immigrants residing in the country illegally should be required to leave, while 74 percent of those who disapprove of the job Trump is doing say they should be allowed to stay and apply for citizenship.

Trump recently tweeted that “DACA is dead,” blaming Mexico for allowing immigrants to illegally cross into the U.S. and Democrats for failing to act on the issue.

“Immigration continues to be a nationally politicized issue for Tennessee voters,” said Dr. Ken Blake, director of the MTSU Poll. “But even among those who approve of President Trump, who has taken a hard line on the issue, most believe that those brought here as children should be allowed to stay.”

Meanwhile, when asked about marijuana legalization:

A bill to legalize marijuana for medicinal use in Tennessee failed to advance out of the state’s Senate Judiciary Committee when it was withdrawn by its sponsor, Republican Steve Dickerson of Nashville, on April 3.

Religious identification best explains differences of opinion on the marijuana issue. Fifty-six percent of the Tennessee voters surveyed describe themselves as born-again or evangelical Christians. Of this group, 51 percent say marijuana should be legal for medicinal use only. Among those who say they are not born-again or evangelical Christians, 52 percent say marijuana should be legal in Tennessee for personal use.

The scientifically valid poll of 600 registered Tennessee voters reached by Issues & Answers Network Inc. interviewers via randomly selected cell and landline phone numbers was conducted March 22-29 and has an error margin of 4 percentage points. The poll is supported by MTSU’s College of Media and Entertainment as well as by the School of Journalism and Strategic Media.

For more information and for previous poll results, visit http://mtsupoll.org.