Classes will continue through remote delivery of instruction remainder of Spring 2020 semester. Many employees are working remotely; as a result, some services may be modified or limited. Updates at mtsu.edu/coronavirus
MTSU 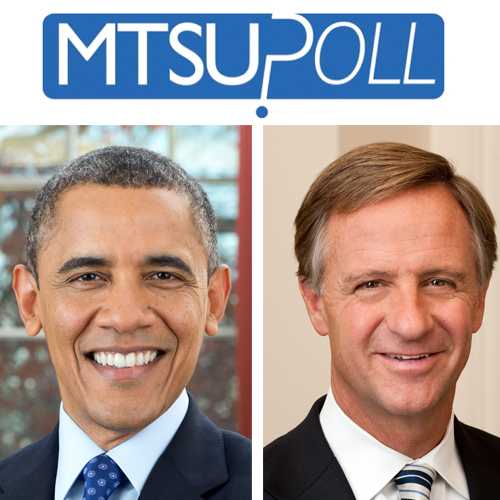 Tennessee voters have warmed a little bit toward President Barack Obama on the eve of his departure from the White House, but a majority still disapprove of his performance as president, the latest MTSU Poll shows.

The MTSU Poll was conducted between Sept. 28 and Oct. 2, following the first presidential candidate debate. The sample of 600 registered Tennessee voters were surveyed via random telephone calls to landline and mobile phones. The margin of error is 4 percentage points.

Obama’s approval up, but still below 50 percent

Asked, “Do you approve or disapprove of the way Barack Obama is handling his job as president?”, the poll found that:

This is the highest approval rating for Obama in Tennessee since the spring 2010 MTSU poll, when approval also stood at 42 percent. Obama’s only higher marks in the state came in spring of 2009, when 53 percent approved shortly after his first inauguration, which was the only time a majority of Tennesseans said they approved of the job he was doing.

“While President Obama fared a little better with Tennessee voters in this MTSU Poll than he has in the recent past, it remains clear that in their final assessment, more Tennesseans disapprove of the job he has done as president than approve,” said Dr. Ken Blake, director of the poll at Middle Tennessee State University.

A recent CNN/ORC poll of Americans nationwide conducted between Sept. 28 and Oct. 2, the same timeframe as the most recent MTSU Poll, found that President Obama’s approval rating stands at 55 percent nationally, with 44 percent who say that they disapprove[1].

While unpopular in Tennessee, Obama will leave office with a higher approval rating across the state than his predecessor did. Only 32 percent of respondents to the Fall 2008 MTSU Poll expressed approval of the job then-President George W. Bush was doing, and 59 percent disapproved.

“This is a rare instance where Obama is outperforming Bush in Tennessee,” said Dr. Jason Reineke, associate director of the poll. “But it is important to remember that Bush was saddled with an unpopular war and a global economic crisis at the end of his presidency.”

Gov. Bill Haslam again had the strongest support of any elected official asked about as part of the MTSU Poll. Among the state’s registered voters:

Reineke called Haslam’s reviews remarkable. “Governor Haslam’s popularity endures the many tests presented by national, state, and local developments in a way that is uncommon in American politics,” Reineke said.

While Haslam had remained noncommittal about whether he supported Trump throughout the campaign, his public rebuff of Trump followed the recent release of a 2005 video in which Trump made vulgar comments that critics say appear to condone sexual assault against women. Trump issued a series of apologies, but Haslam joined a number of GOP leaders across the nation to publicly withdraw their support.

Most approve of Tennessee General Assembly

Over half – 52 percent – of Tennessee voters approve of the job the Tennessee General Assembly is doing, while only 27 percent disapprove. These numbers are essentially unchanged from the 48 percent who approved and 26 percent who disapproved in January.

“The Tennessee General Assembly seems to have generally withstood any significant political fallout from recent missteps and scandals, including the ouster of former state representative Jeremy Durham,” Blake said.

Undated photo of the Tennessee General Assembly convening at the Capitol in Nashville.

Approval ratings for Republican U.S. Sens. Lamar Alexander and Bob Corker are identical to each other, and statistically unchanged from January’s poll. The poll showed 45 percent of registered Tennessee voters approve of the job each senator is doing, while 33 percent disapprove. In January, 42 percent approved of job Alexander was doing while 35 percent disapproved, and 47 percent approved of the job Corker was doing while 31 percent disapproved. In both polls, the rest say they don’t know or refuse to answer the question.

The poll was taken before Trump’s recent announcement that Corker was being added to his national security advisory council. The same day of the announcement, news broke about Trump’s vulgar comments about women in the 2005 video, prompting Corker to issue a statement that said Trump’s comments “are obviously very inappropriate and offensive and his apology was absolutely necessary.”

“Despite the two Republicans’ different approaches to the presidential race, with Sen. Corker being a more vocal supporter of Donald Trump’s candidacy and Sen. Alexander being somewhat more reserved, there is almost no difference in how Tennessee voters view their U.S. senators, and more approve than disapprove,” Blake said.

“We’re running out of adjectives to describe how poorly Tennesseans view the U.S. Congress,” said Reineke.

For more information about the MTSU Poll, visit http://mtsupoll.org.

Telephone interviews for the poll were completed by Issues & Answers Network Inc. from among a random sample of registered Tennessee voters age 18 and over between Sept. 28 and Oct. 2, 2016. Data were collected using Tennessee statewide voter registration sample of 51 percent landline and 49 percent cell phones. Quotas by gender and Grand Region were implemented. Data were weighted based on respondent age to ensure the data represent Tennessee registered voters. The survey’s overall error margin of 4 percentage points indicates one can be 95 percent confident that the actual population figure lies within 4 percentage points (in either direction) of the poll result. Error margins for subgroups can be larger, depending on the subgroup’s size.

The MTSU Poll was conducted between Sept. 28 and Oct. 2, 2016, following the first presidential candidate debate featuring Clinton and Trump. Registered voters in Tennessee were surveyed via random telephone calls to landline and mobile phones. The margin of error is 4 percentage points.

Likely voters were identified from among those participants by their responses to a series of questions about past voting behavior and intention of voting in the November general election. The poll captured responses from 600 registered voters, from whom 472 (79 percent) were identified as likely voters.

“Barely half of Tennessee’s likely voters support Mr. Trump,” said Dr. Ken Blake, director of the poll at Middle Tennessee State University, “but that is more than enough for him to decisively defeat his opponents and win the state’s 11 electoral college votes.”

The poll also asked registered voter respondents whether they had voted in the state’s presidential primaries in March, if so for which party, and for whom they had voted.

About 17 percent of registered voters in the sample say they voted in the Republican primary for someone other than Trump. Of these, 71 percent say they would vote for Trump in the general election, followed by 6 percent for Johnson, 4 percent for Clinton, and 1 percent for Stein. Again, the remainder say they are undecided or refuse to answer the question.

“Despite a lot of speculation about party defections from unpopular candidates following divisive primaries, only small minorities of voters report that they are voting for someone other than their party’s nominee in the general after voting for a primary rival,” said Dr. Jason Reineke, associate director of the poll.

Here’s a video recap from Reineke:

The poll also asked several questions about Clinton and Trump’s inclinations to the presidency.

“Although Trump easily leads when it comes to vote choice, when it comes to qualities that matter in a president – competence, integrity, and temperament – perceptions of the candidates are much more closely divided,” said Reineke. “But honesty is clearly an issue for Clinton. At the same time, honesty and emotional control may well be issues for Trump.”

More expect Clinton to win in the end

The last question about the two major party candidates for president on the poll asked “Regardless of who you support, and trying to be as objective as possible, who do you think will win the presidential election this November?”

Forty-three percent of registered Tennessee voters say they expect Clinton to win as opposed to only 35 percent who say the same about Trump. But a sizable portion – 21 percent – say they just don’t know who will win at this point.

Telephone interviews for the poll were completed by Issues & Answers Network Inc. from among a random sample of registered Tennessee voters age 18 and over. Data were collected using Tennessee statewide voter registration sample of 51 percent landline and 49 percent cell phones. Quotas by gender and Grand Region were implemented.

Data were weighted based on respondent age to ensure the data represent Tennessee registered voters. The survey’s overall error margin of 4 percentage points indicates one can be 95 percent confident that the actual population figure lies within 4 percentage points (in either direction) of the poll result. Error margins for subgroups can be larger, depending on the subgroup’s size.