VIDEO: Trick or Treat on Greek.. 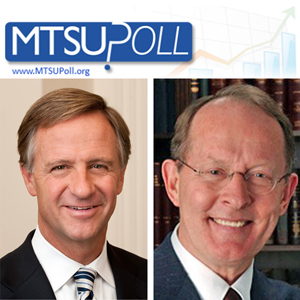 The election night fate of a proposed amendment constitutionally banning a state income tax remains uncertain, given close percentages of supporters and opponents and a large proportion of undecided voters, the latest statewide MTSU Poll shows.

The amendment to constitutionally ban a state income tax, known as Amendment 3, drew the support of 30 percent of registered voters, while a statistically equivalent 25 percent oppose it, and 24 percent are unsure. Fourteen percent of respondents said they would cast no vote at all, and the rest decline to answer. (To view an interactive graphic of results, click here.)

The recent poll of 600 registered voters has a margin of error of 4 percentage points.

Amendment 3 would constitutionally prohibit the legislature from levying, authorizing or permitting a state or local tax on income. The amendment carves out an exception for the state’s existing tax on some income from stocks and interest.

“Given the statistical tie between supporters and opponents as well as the large number of voters who are still making up their minds, we can’t say for sure from these poll results how Amendment 3 will fare,” said Jason Reineke, associate director of the poll at Middle Tennessee State University.

“Remember, too, that, in order to pass, the amendment will have to receive a number of votes equal to a majority of however many votes are cast in the race for governor. In our sample, 166 likely voters said they supported the amendment, while 416 planned to cast a vote in the race for governor. That comes to only about 40 percent. So, Amendment 3 appears to have some ground to cover among all of those voters who are still undecided about it.”

In both races, about 10 percent of respondents say that they will vote for someone other than the major party candidates, and the remainder either said they wouldn’t cast a vote or declined to answer the question.

“If Ball could persuade most of the still-undecided voters to choose him, he would have a shot at beating Alexander,” Reineke said. “But a shift like that seems unlikely, barring some sort of last-second surprise.”

Reineke noted that both Haslam and Alexander saw substantial drops in their approval ratings last spring compared to the spring of 2013. Haslam’s approval fell from 61 percent to 47 percent, while Alexander’s declined from 54 percent to 43 percent.

“Both Haslam and Alexander are polling now at levels roughly equivalent to their approval rates back in the spring,” Reineke said. “Perhaps last spring’s declines in approval indicate that voters were starting to choose sides in the election.”

In asking about the races for governor and U.S. Senate, interviewers randomly rotated the order in which they presented the candidates. Meanwhile, interviewers read the full text of the amendment to each respondent.

Respondents who had taken part in early voting were identified early on and asked to recall how they had voted. Respondents who had not yet voted were asked which choice they would make “if the election were held today.” Where referenced, “likely voters” are respondents who, in addition to being registered voters, indicated that they intended to vote in the upcoming election.