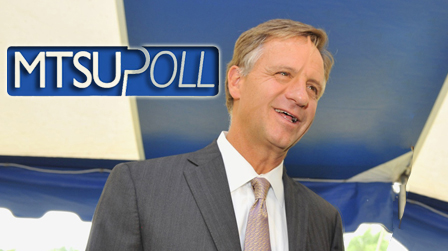 Gov. Bill Haslam, left, and MTSU President Sidney A. McPhee visit during preparations for the official groundbreaking of the university’s new Science Building on May 3, 2012. (MTSU file photo by Andy Heidt)

More than two in three voters (68 percent) say they approve of the way Haslam is handling his job as governor. Fourteen percent disapprove, and 16 percent don’t know. The rest give no answer.

Surprisingly, perhaps, in the context of a highly partisan national election, Haslam is nearly as popular among Democratic and independent voters as he is among voters from his own party.

“The poll found 75 percent approval among voters from the governor’s own party,” said Dr. Jason Reineke, associate director of the MTSU Poll. “But a statistically identical 76 percent of independents also approve, as do a solid 54 percent majority of Democrats.

“Especially considering the partisan climate regarding national politics, these are very good numbers for the governor.”

The results do show relatively less popularity for the governor among Tennessee’s African-American voters, only 47 percent of whom expressed approval of his job performance compared to 22 percent who expressed disapproval and 31 percent who said they weren’t sure.

The governor’s numbers were statistically identical, though, across age, education, income and gender categories.

“Both men have tended to govern from the political center while steering clear of hot-button social issues,” Blake said. “In Tennessee, that approach seems to pay substantial political dividends.”

Haslam’s popularity has been high in previous MTSU Polls, although differences between the registered likely voters examined in the current poll and the general population of Tennessee adults sampled in those previous polls make direct comparison difficult.

Learn more about the poll, including previously released results, at www.mtsusurveygroup.org.