MTSU Poll: Most in state OK allowing guns in parke... 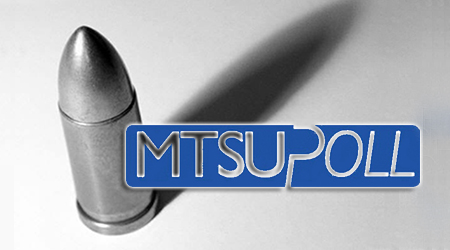 A majority of Tennesseans support a key provision of the “guns in trunks” measure that was easily passed today in the state House of Representatives, but opinions about other types of firearm restrictions remain mixed, the latest MTSU Poll indicates.

“Of the gun-control measures the poll asked about, allowing handgun permit holders to store guns in cars parked at work stood out as the only one that attracted majority support among Tennesseans,” said Dr. Ken Blake, director of the poll at Middle Tennessee State University.

Following earlier passage by the state Senate, the legislation passed the state House today with a 72-22 vote. It now heads to Gov. Bill Haslam for his signature.

According to the poll, a 58 percent majority of Tennesseans favor a law allowing “handgun concealed-carry permit holders in the state of Tennessee to keep handguns in cars parked in their employers’ parking lots while at work.”

Only 33 percent say they oppose such a law, and the rest don’t know or refuse to answer. It should be noted that the question asked about concealed-carry permit holders. Handgun permits in Tennessee allow guns to be carried openly or concealed.

The chart above shows Tennesseans’ views on gun sales laws from data in the spring 2013 MTSU Poll, conducted in mid-February.

Ambivalence about firearm regulation appears to be the more common and stable pattern in Tennessee public opinion, Blake said.

A newly released poll by NBC News and The Wall Street Journal indicates that national support for stricter laws covering the sale of firearms has climbed to 61 percent.

Only 5 percent think they should be made less strict, and the rest don’t know or decline to answer.

The percentages are statistically identical to those from the Spring 2011 MTSU Poll, which found 41 percent favoring tougher gun sale regulation, 43 percent preferring to keep the current level of regulation and 12 percent wanting regulations relaxed.

“On the general question of making gun laws more strict or keeping them as they are, Tennesseans are basically standing still while the nation as a whole changes,” Blake said.

Meanwhile, attitudes toward specific gun measures range from ambivalence to clear support for tougher regulation, Blake said. According to the poll: