‘Collective Memories of War’ i.. 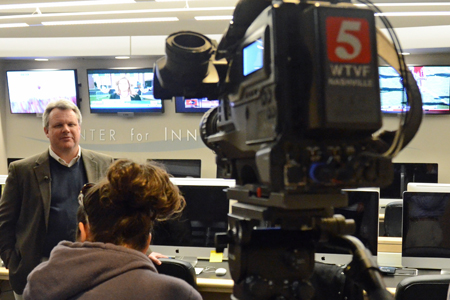 Tennessee’s voters, reddening most notably among political independents and those 45 or younger, will head to the polls Nov. 6 with values on their minds moreso than the economy, an in-depth look at Tennessee voter attitudes indicates.

Dr. Ken Blake, director of the MTSU Poll, prepares for an Oct. 27 interview with Nashville’s NewsChannel 5 about the recently released statewide poll on how the 2012 presidential race is shaping up in Tennessee. (Photo by MTSU News and Media Relations)

The analysis draws from the latest MTSU Poll of registered, likely voters in Tennessee as well as from exit poll data gathered in Tennessee during the 2008 presidential election.

“At least two trends playing out in Tennessee run counter to what seems to be happening nationally in this election,” said Dr. Ken Blake, director of the MTSU Poll. “First, President Obama is behind Gov. Romney among younger Tennesseans and has lost substantial ground in that demographic since the 2008 election. Nationally, Obama has lost some ground among younger voters since 2008 but still leads Romney by a comfortable margin. Meanwhile, the economy – a primary issue for voters nationally – seems to be taking a back seat to values among Tennessee voters.”

Republicans clearly have been gaining ground in Tennessee. All but six Tennessee counties voted Republican in 2008. In 2010, Republicans won both the governor’s office and control of the state Legislature for the first time since Reconstruction. But the analysis, which compares the latest MTSU Poll results with exit poll data from 2008, shows where the state’s crimson shades have grown especially deep: among whites, the college educated, political independents, those under 45, and men.

“The exit poll data and the MTSU Poll data may not be entirely comparable in terms of whom they represent,” Blake said. “And we have to be careful about inferring individual-level attitude shifts based on group-level changes. But caveats aside, there’s compelling evidence here that Republicans have gained – and Democrats lost – substantial ground in several Tennessee voter segments, especially politically unaffiliated and younger to middle-aged voters.”

Despite a variety of questions in the latest MTSU Poll about economic, social, and foreign policy issues, the factor that best predicts which candidate a likely voter supports is the voter’s answer to the question, “Which candidate comes closer to sharing your values?” Of those who answer Romney, 94 percent express support for the former Massachusetts Governor. Similarly, 93 percent who say Obama comes closer to sharing their values express support for him. Most undecided likely voters, 56 percent, say Romney comes closer to sharing their values. The next most important consideration for Tennessee voters – a sense of each candidate’s honesty – shows similar correlations with voting preferences.

“Most of us, even those who are most engaged in politics, simply don’t have the time, resources, or interest to seek out total information or form detailed opinions on every aspect of every issue,” said Dr. Jason Reineke, associate director of the MTSU Poll. “So we often rely heavily on general assessments and perceptions of whether a candidate thinks and feels similar to how we do ourselves, or whether a candidate is trustworthy, in place of knowledge.”

Crucially, likely voters who think that the economy is stagnant – by volunteering to interviewers without being prompted to do so that that they feel the economy is neither getting better nor getting worse (9 percent) – tend to support Romney over Obama almost 4-to-1. This is understandable considering that only 12 percent of likely voters rate the economy as “excellent” or “good,” while 86 percent rate it as “not so good” or “poor.”

Even more important than the current momentum of the economy, though, is which candidate likely voters think would do better at handling it moving forward. After general assessments of the candidates’ values and honesty, expectation about how the candidates will perform on the economy is the most important factor in likely voters’ choice for president. Thirty-one percent said they thought Obama would do a better job, while 59 percent said they thought Romney would do a better job.  This almost perfectly mirrors the 59 percent who support Romney and 34 percent who support Obama in the election. About 4 percent think the candidates would handle the economy equally well or poorly, with the rest saying that they don’t know or refusing to answer the question.

“Our representative sample of Tennessee’s likely voters is essentially telling us they think Governor Romney would do a better job handling an economy that is, from their perspective, bad and that seems to them to be either staying that way or getting worse under President Obama,” Reineke said.

After attitudes on these first three factors – values, trust, and the economy – are accounted for, the influence of other factors, such as foreign policy (including terrorism and the killing of Osama Bin Laden), social issues (such as abortion and gay marriage), and even the federal deficit, though important and informative in and of themselves, had little impact on likely voters’ choice for president.

Meanwhile, the analysis finds that 81 percent of the state’s likely voters approve of the state’s new law requiring voters to show an approved photo ID before voting. What opposition there is to the photo ID requirement is strongest among Democrats, 34 percent of whom oppose the law compared to only about 13 percent of independents and about 4 percent of Republicans.

Conducted by telephone Oct. 16-21, 2012 by Issues and Answers Network Inc., the poll completed 650 interviews with randomly selected registered voters in Tennessee. The poll has an error margin of plus or minus four percentage points at the 95 percent level of confidence.

Interviews averaged 12 minutes in length. Weights were applied to the data to match the sample’s gender and race proportions to those seen in exit poll data from the 2008 election in Tennessee. However, a comparison of results with and without the weights showed little difference.

The poll defined “likely voters” as registered voters who had voted already or who had either voted in the 2010 governor’s race in Tennessee and/or described themselves as “very likely” to cast a vote in the upcoming presidential election. The results reported are for the 609 poll respondents who met the likely voter criteria.

All poll results are available on the MTSU Poll website, http://www.mtsusurveygroup.org.