MTSU’s Roots Radio back on air..

NASHVILLE, Tenn. — The Nashville Predators stepped forward Monday to raise money and awareness for Middle Tennessee State University student veterans in distress and whose educational benefits have either expired or have been exhausted.

Predators President and CEO Sean Henry joined MTSU President Sidney A. McPhee and Country Music Hall of Famer Charlie Daniels, who has financially supported the Charlie and Hazel Daniels Veterans and Military Family Center through his foundation, announced the creation of The General’s Fund during a news conference at Bridgestone Arena, kicking off Ford Military Salute Week. 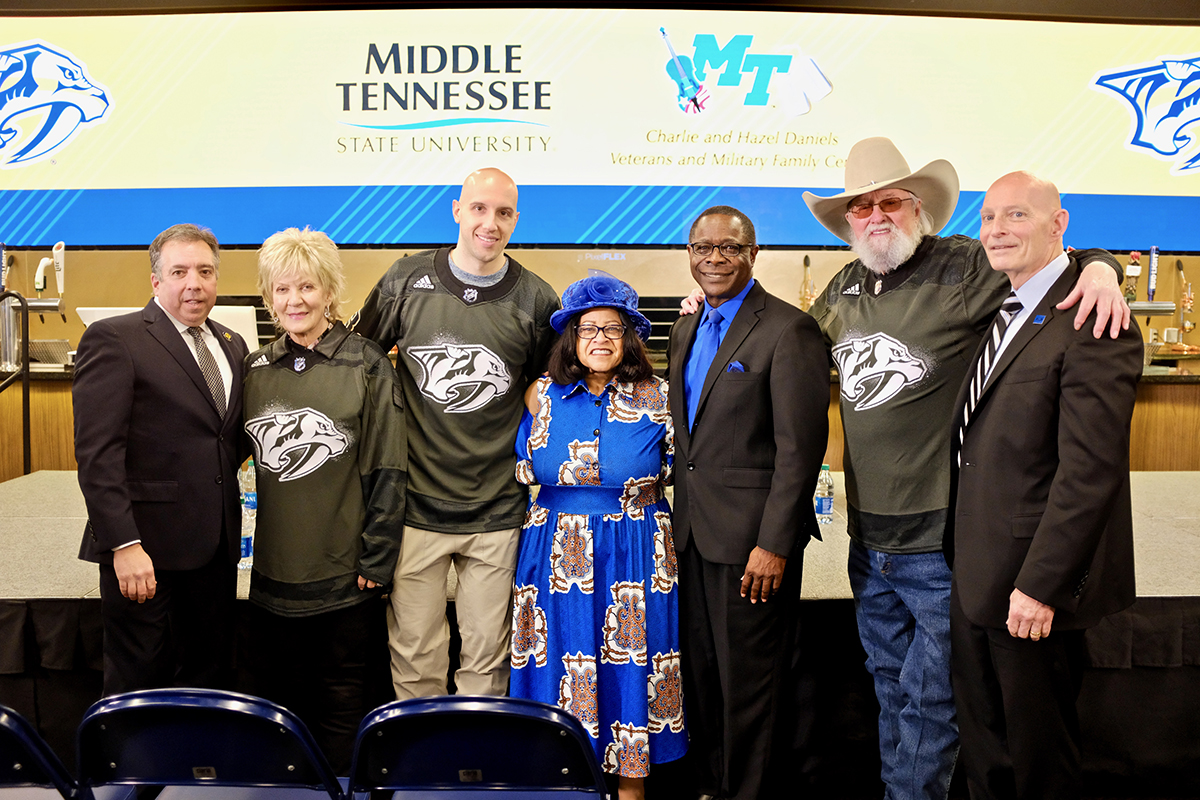 Through this partnership, Henry said the Predators and MTSU will help Huber support military-connected students who struggle financially to reach their higher education and career goals.

Huber, along with Hilary Miller, director of the Daniels Center at MTSU, will direct money from the fund to help student veterans with the greatest financial needs.

“MTSU proudly serves more than 1,100 military-connected students, yet about 20 percent of them no longer have the educational benefits that were earned through service to our country,” Henry said. “The General’s Fund that we are establishing today will help fill that gap.”

Henry said the Predators and Bridgestone Arena will help raise money for The General’s Fund throughout the remainder of the 2019-20 season – and will continue to support the effort in future seasons.

“We deeply appreciate our partnership with the Predators,” McPhee said. “Their commitment to support The General’s Fund, for this and future seasons, will harness the power of this great franchise to yet again bring forth positive change in our community.”

The Daniels Center at MTSU is the largest and most comprehensive veterans center on any Tennessee higher-education campus. With the mission of providing transition services for veterans and their families as they return to civilian life after military service, the Daniels Center military-connected MTSU students a one-stop shop to meet a variety of academic needs.

Daniels, who attended Monday’s press conference with his wife, Hazel, described the honor of his name upon MTSU’s veteran and military family center as greater than his selection in the Country Music Hall of Fame. The Danielses thanked Henry, the Predators and Bridgestone Arena for stepping forward to help create The General’s Fund. 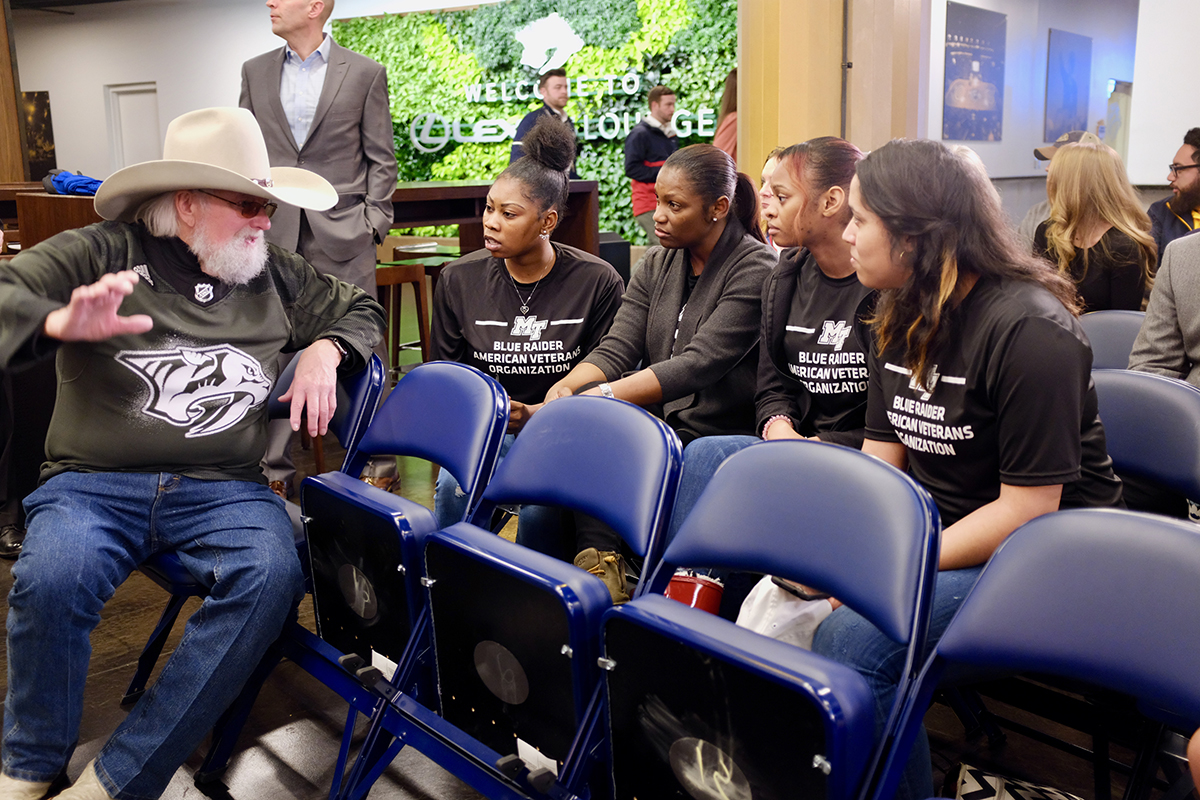 Daniels’ support for the center comes through The Journey Home Project, a not-for-profit organization that assists other not-for-profits in securing funds to help causes that benefit veterans. The project was founded in 2014 by Daniels and his manager, David Corlew. For more information, please visit www.MTSU.edu/military.

MTSU student veterans Tatyana Braswell, Sheneca Burnett, Kwantisha Farmer and Teresa Carter attended the announcement and will join the president and others at Monday’s game.

Farmer, 29, a sophomore criminal justice administration major from Round Rock, Texas, said “it means an outreach from the community to give back to veterans. I’m really excited to see what the community outreach the Predators are going to offer to MTSU student veterans.” She was a sergeant in the U.S. Marine Corps from 2012-16, and served in Bahrain in the Middle East.She’s also a Predators fan. 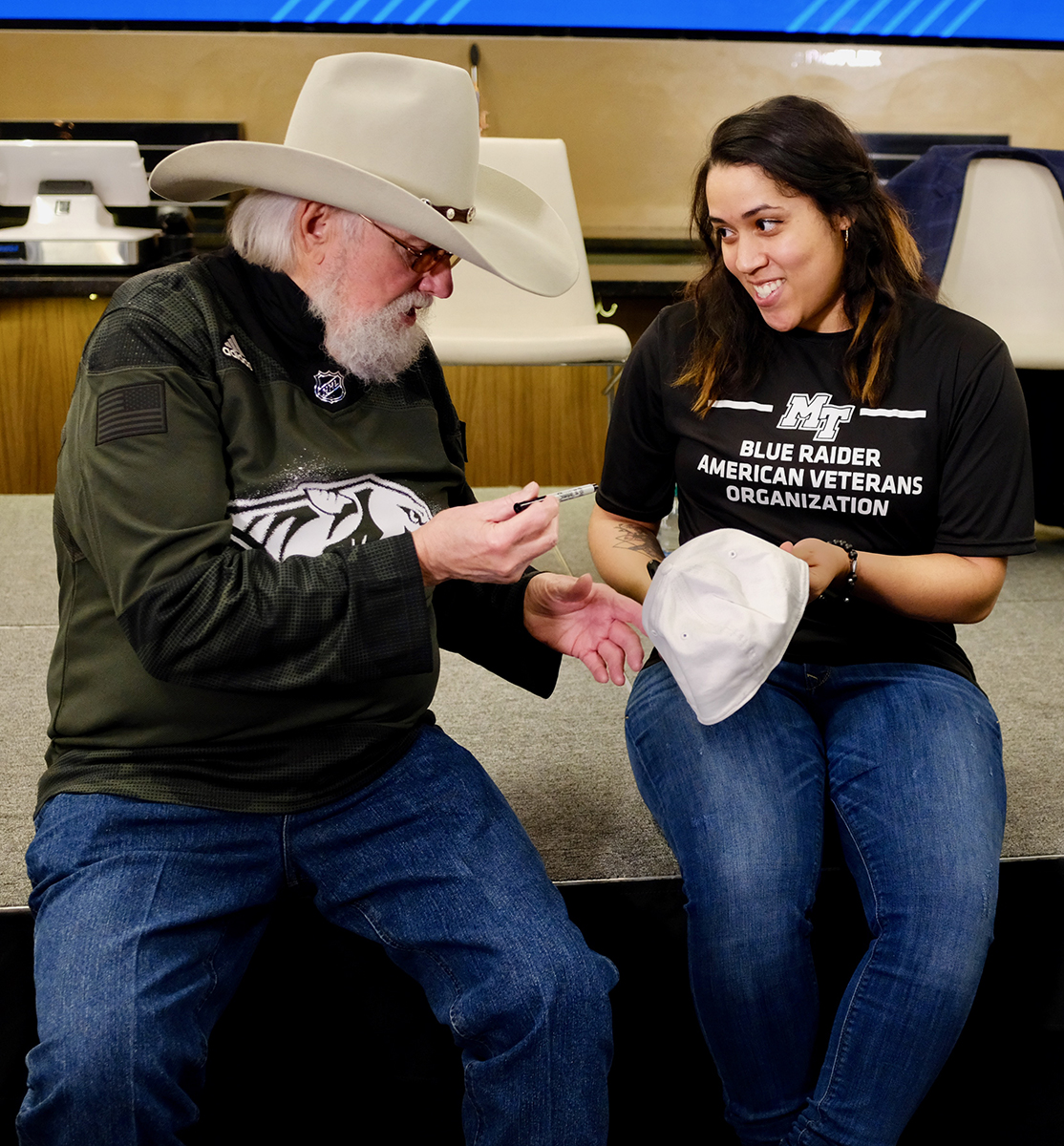 In addition to announcing their partnership with the Daniels Center at MTSU, the Nashville Predators will host Military Appreciation Games Monday against the Edmonton Oilers and on Thursday against the Dallas Stars. Ford Military Salute Week will feature military elements activated on the plaza, on the concourse and throughout the in-game presentation each night.

Before each game, fans will have the opportunity to interact with every branch of the U.S. military on the Bridgestone Arena Plaza. From viewing military vehicles or participating in fitness challenges to testing out a virtual reality experience, there will be plenty of activities for fans of all ages. Those in attendance will also have the opportunity to thank current military members and veterans for their service to our country.

Monday night, the Nashville Predators will host a pregame reception for members of all branches of the armed forces prior to the game against Edmonton.

Attendees will include high-ranking officials, including Huber and Army Col. Jeffery Thompson,  chief of staff of the 101stAirborne Division located at Fort Campbell, Kentucky. The reception will take place in the meeting rooms by the AT&T Fan Information Center on Bridgestone Arena’s main concourse from 5 to 7 p.m. 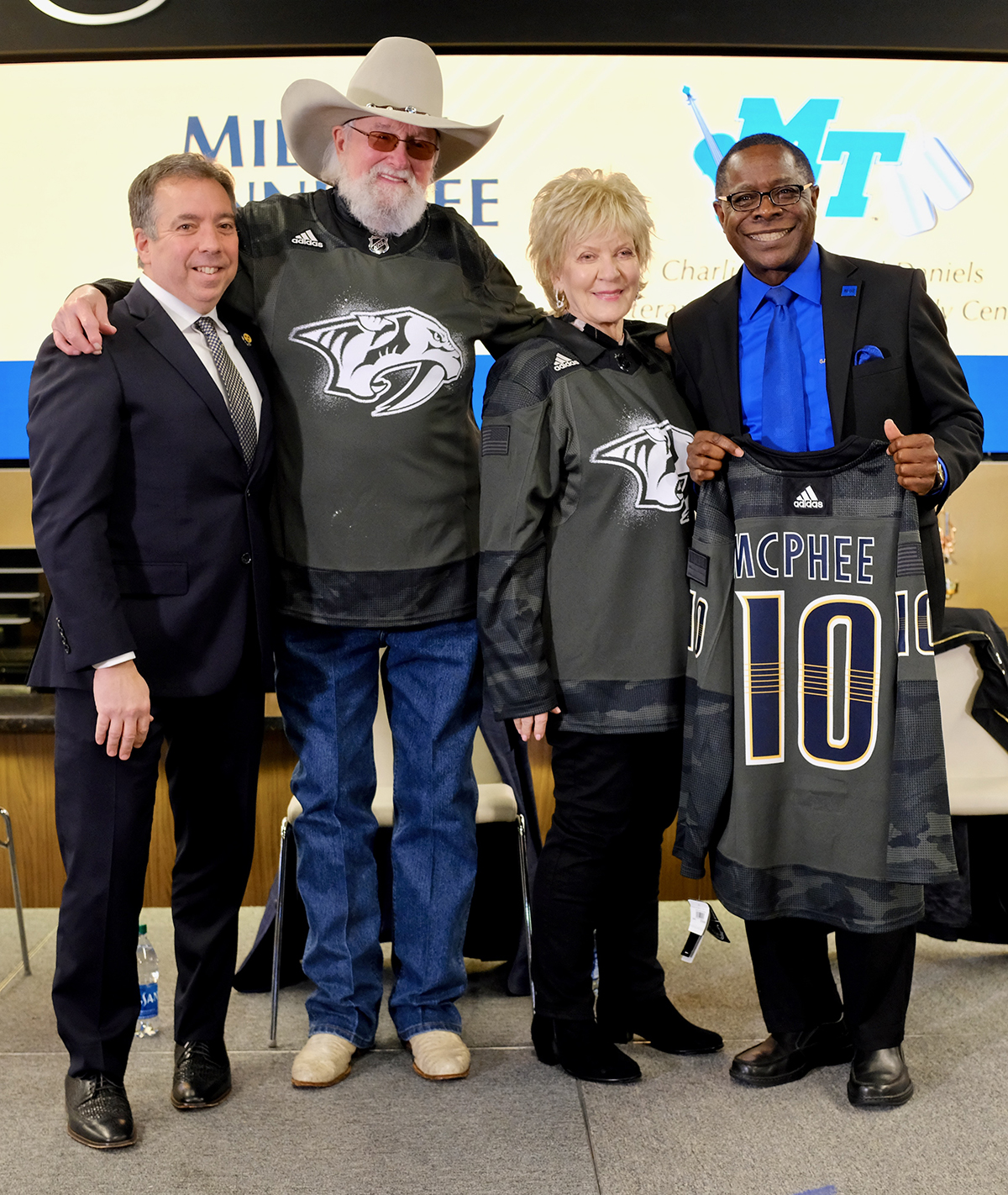 The Predators will incorporate a variety of in-game elements to honor veterans and active- duty military members.

Predators center Nick Bonino will host a Bones’ Barracks meet-and-greet each night, as he has done since the start of the 2018-19 season. The Military Salute, Mayor of Smashville, Fan Captain, color guard and intermission band each night will feature members from every branch of the U.S. armed forces. With an exciting, surprise opening ceremony and puck drop, Ford Military Salute Week should not disappoint fans.

During pregame warmups, players will wear special jerseys to be auctioned off in the Foundation Area (outside of Section 106/107). Some will be available Monday; the remaining jerseys will be available at Thursday’s Military Appreciation Night.

Proceeds will benefit a variety of military-focused organizations in the Middle Tennessee area. To bid, text “PREDS” to 76278 or give to the MTSU Foundation at www.mtsu/give.

The Nashville Predators Foundation empowered by SmileDirectClub will also have Military Mystery Pucks for purchase in the Foundation Area (Section 106/107). For a $30 donation, fans can select a wrapped, themed puck autographed by a Predators player.

Throughout the year, the Predators also offer a variety of military-specific ticket and support programs. All men and women who serve in our armed services or as first responders can receive $20 off a lower bowl ticket or $10 off an upper bowl ticket by showing their military ID when purchasing single-game tickets for a Predators home game.

Additionally, the Nashville Predators Foundation empowered by SmileDirectClub and Sudden Service have teamed up to benefit Folds of Honor, which provides scholarships to children and spouses of fallen and disabled service members. Sudden Service will donate $100 to Folds of Honor for every regular-season goal scored at home.

After the announcement, McPhee was in for a surprise nearby at The Palm Restaurant. He was shown a caricature of himself that will join hundreds of other prominent citizens, including Daniels, whose faces grace the walls at the fine dining establishment. 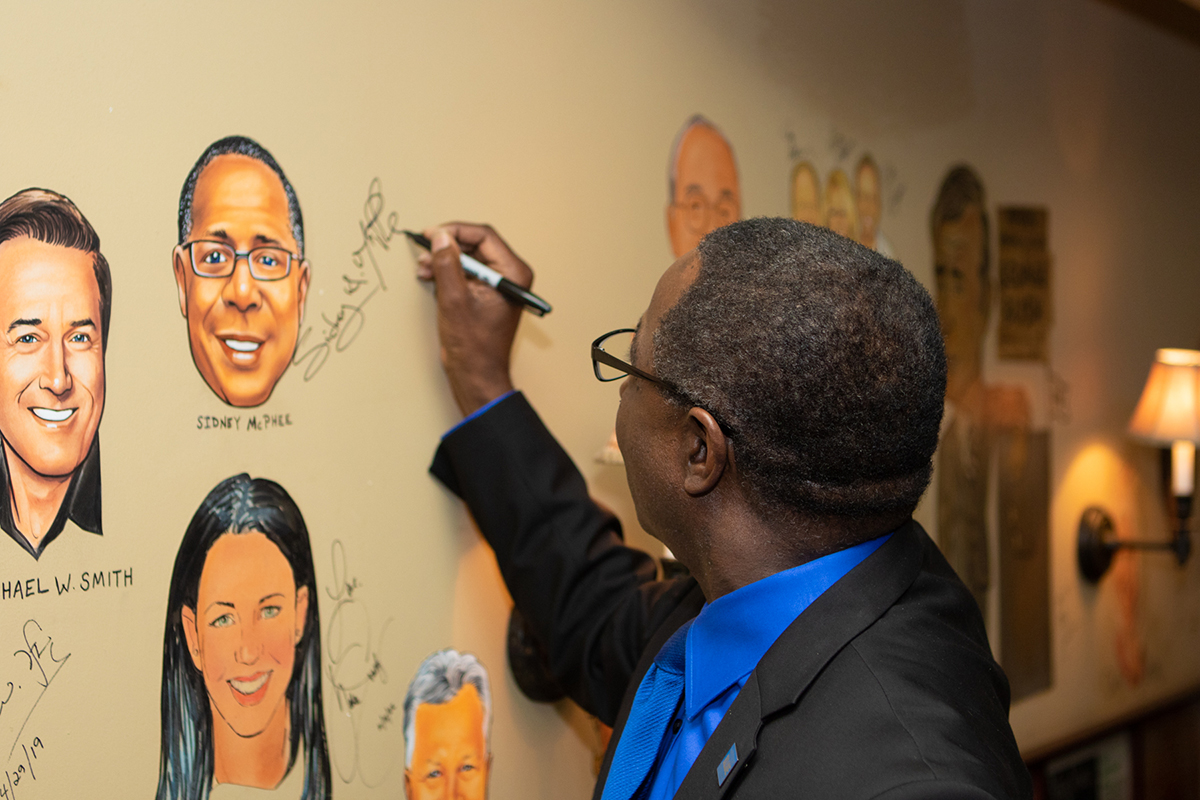 MTSU President Sidney A. McPhee signs his name beside the caricature of himself that now is part of the walls at The Palm Nashville restaurant in downtown Nashville, Tenn., Monday, March 2. McPhee was surprised to learn that his likeness joins hundreds more at the fine dining establishment. He was in Nashville for the MTSU-Nashville Predators news conference to announce the extending of the partnership between the two organizations. (MTSU photo by James Cessna)