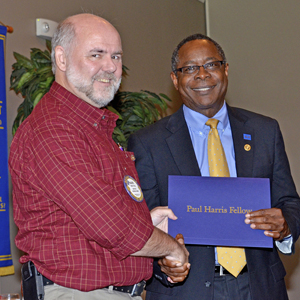 MTSU President Sidney A. McPhee on Tuesday was named a Paul Harris Fellow by the Murfreesboro Rotary Club in recognition of his international outreach on behalf of the university.

The club surprised McPhee, a member of the noon Rotary group, with the honor and cited the president’s role as a goodwill ambassador to China, as well as his focus upon international student enrollment and cultural exchanges with other countries.

Mark King, left, president of the Murfreesboro Rotary Club, presents MTSU President Sidney A. McPhee with a certificate and lapel pin on Sept. 10 in honor of his recognition as the club’s newest Paul Harris Fellow. (MTSU Photo)

“This was a terrific surprise and a great honor,” McPhee said. “This means so much to me, given the international focus by Rotary worldwide.”

Rotary is a global network of 1.2 million volunteer leaders who dedicate their time and talent to tackle the world’s most pressing humanitarian challenges. They work to improve lives at both the local and international levels, from helping families in need in their own communities to working toward a polio-free world.

The Paul Harris Fellow recognition was created in memory of Paul Harris, the founder of Rotary, as a way to show appreciation for contributions to the Rotary Foundation’s charitable and educational program.

McPhee, who has led university delegations to several countries, has worked to strengthen MTSU’s international undergraduate and graduate student enrollment. He has expanded the university’s study-abroad and cultural opportunities and developed research collaborations with international partners.

China Agricultural University in Beijing gave McPhee its highest academic award, “Honorary Professor,” in May 2007. He was appointed in October 2010 as senior advisor to the chief executive of Hanban-Confucius Institute Headquarters in Beijing.

A book of his photographic essays, “China: Through the Eyes of a University President,” published in July 2012, was sponsored by the Hanban-Confucius Institute and released internationally.