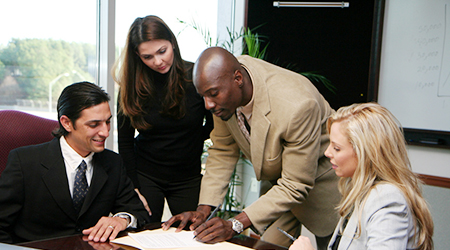 Are employees more polite when talking to male bosses than to female bosses? That’s the provocative question asked by Dr. Xiaowei Shi, a professor in MTSU’s Department of Speech and Theatre.

In Shi’s study, 212 full-time employees in different white-collar workplaces in Indiana, California and Ohio were presented with a workplace scenario and asked to imagine how they would talk to their supervisors about it.

Shi’s research paper was chosen as one of the top four papers in organizational communication at the National Communication Association’s 97th annual conference in November 2012.

The majority of the participants in Shi’s study were between 20 and 30 years old. All used English as their primary working language. All had at least one year of work experience at a full-time paid position.

One of eight different scenarios was presented. For example, a recently hired worker has a new method to improve efficiency in product testing, but the worker doesn’t want to seem like a show-off or know-it-all.

Does the worker approach the supervisor named Bob differently than when the supervisor is named Barb? Shi’s research found that employees put more effort into their thinking when addressing a male boss.

To illustrate how this can play out when people interact, Shi recalls one of her professors at Purdue University who later became vice provost.

“Students call her by her first name, Beverly, and then call her husband, who is a full professor, Dr. Seifer,” Shi said. “And she said, ‘I care about that. I feel people don’t take me as seriously as my husband, even though we are both doctors.’ And her position is the vice provost!”

Shi said the surprising part of her research is that stereotypes come into play even with people who believe they are progressive and skilled at critical thinking.

“I hope people start to realize we need to guard against implicit knowledge,” Shi said. “Female leaders are sensitive, relationship-oriented—that is the fact. Research has already demonstrated that. Simply knowing that is good, but that does not mean you can be less polite to a female.”