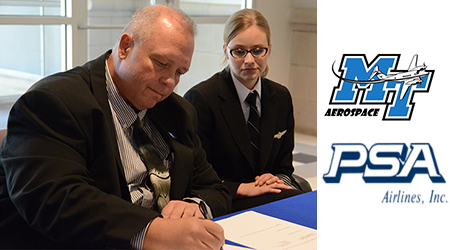 MTSU student pilots in the university’s highly regarded aerospace department will be beneficiaries of a bridge program between MTSU and PSA Airways Inc. that potentially could land them jobs.

The university and PSA Airways formally signed a partnership agreement July 10 in the Business and Aerospace Building’s south lobby to establish that program.

Randy Fusi, vice president of safety for PSA Airways, signed for his airline, but was unable to attend. PSA chief pilot George Reazer and captain and pilot recruiter Adrienne Wells represented their company.

Watch video below of the agreement signing and learn more about the collaboration.

Wells said the agreement “will give the opportunity for the students to have an excellent pathway into the aviation career field.”

PSA Airways is a wholly owned subsidiary of US Airways and headquartered in Dayton, Ohio. Wells said the airline has flight bases in Charlotte, N.C., and Knoxville, Tenn.

Fischer said it is “a great opportunity” for students.

“It’s what makes us different from most institutions in Tennessee, in that we offer hands-on opportunities and bridge programs that allow you to take that next step in your career to the future,” he said. “And this is an excellent example of how industry and universities can work together to solve problems that are out there as we move forward.”

Paul Mosey, left, MTSU’s chief flight instructor, introduces George Reazer, MTSU College of Basic and Applied Sciences Dean Bud Fischer and Adrienne Wells, PSA Airways captain and pilot recruiter, to an audience attending the signing of a bridge agreement between the university and the airline July 10 in the Business and Aerospace Building. The partnership potentially will help MTSU graduates land pilot jobs with the airline.

MTSU senior Chachere Moore said it is “a great opportunity to show just how great the university is, how great the program is and how strong it is for them to go out of their way to come here today to show us what steps we need to do to reach our goal of becoming a commercial airplane pilot.”

Moore said she is “going to look more into it, and speak with them and pursue it. … Today, this is an opportunity to pursue what I want to do. I think this is a great opportunity.”

Speaking to students attending the announcement, Fischer said, “This is why this program is so good. It’s amazing because of the equipment that’s associated with it and the people who teach you the equipment and teach you how to be pro pilots or maintenance people.”