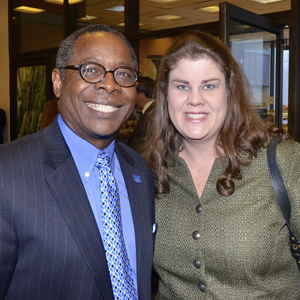 NASHVILLE — MTSU’s Quest for Student Success efforts were recognized Tuesday by state Rep. Dawn White during a hearing of the House Education Committee at the Capitol.

State Rep. Dawn White, R-Murfreesboro, speaks with MTSU President Sidney A. McPhee in the hallways of the Legislative Plaza Tuesday after a hearing by the House Education Committee. (Photos by MTSU Marketing and Communications)

White, who received three degrees from MTSU, introduced President Sidney A. McPhee and John Hood, director of government and community affairs, as the committee hailed the contributions by several Tennessee Board of Regents institutions.

“MTSU recently unveiled a sweeping set of reforms — the Quest for Student Success — that are designed to make sure that every student who comes to MTSU with the drive to achieve will be met with the best instruction with excellent professors who care for their success,” White, R-Murfreesboro, told the committee.

“The plan calls for the university to identify and rework general core courses and create a culture of high expectations coupled with personal attention when students struggle inside or outside the classroom.”

MTSU President Sidney A. McPhee presents House Speaker Beth Harwell with a jar of honey produced by the university’s Agribusiness and Agriscience Department.

White, who represents House District 37, told the committee about several other MTSU student success initiatives, including:

“It is hoped that these new efforts will aid in Gov. Bill Haslam’s goal for 55 percent of Tennesseans to earn a degree or certificate,” White said.

MTSU’s Quest for Student Success plan can be found at www.mtsu.edu/studentsuccess.

White reminded legislators that MTSU was the No. 1 choice for undergraduates in Tennessee and the No. 1 producer of degrees in the Tennessee Board of Regents system.

McPhee, who spent Tuesday visiting House Speaker Beth Harwell, Lt. Gov. Ron Ramsey and other legislators at the Capitol, thanked White for her support of her alma mater.

“We are blessed to have Rep. White as a member of our area’s legislative delegation,” he said. “And we are lucky to be represented by a terrific and committed group of lawmakers.”