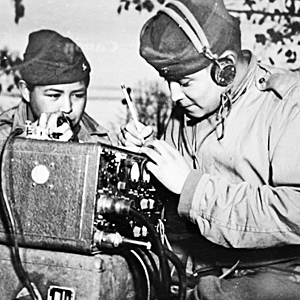 Click the image above to learn more about the Navajo Code Talkers.

Using their native language, these military heroes developed a secret communication code during World War II that enemy forces, namely the Japanese in the Pacific theater, could not decrypt. The code is credited with saving thousands of lives and contributed significantly to shortening the war in the Pacific.

Visiting the Midstate this weekend to participate in several Veterans Day-related events, 10 of the surviving Navajo Code Talkers will visit MTSU Saturday. Now in their 80s and 90s, these veterans truly represent living history.

At 11:30 a.m., they will visit the Military Memorial Ceremony at the Veterans Memorial site outside the Tom H. Jackson Building; then at 1 p.m., they’ll attend the Salute to Armed Services Picnic at the Kennon Hall of Fame near Murphy Center.

Later, MTSU will recognize the group on the field at Floyd Stadium before the national anthem kicks off the 3 p.m. football game between MTSU and Florida International.

The code was first used during the invasion of Guadalcanal in 1942. Planners of the Pacific theater were impressed with how the “Navajo Code” worked, and enemy forces were never able to understand or decrypt what U.S. forces were communicating.

This demonstration of “Navajo Code” called for more Navajos to be recruited by the U.S. Marine Corps — starting with 29 young Navajo Native Americans in early 1942, then by 1945 including more than 400 U.S.-trained Navajo Code Talkers.

In a simple, memorable way, the military terms resembled the Navajo language and confused enemy forces. For example, the Navajo word for tortoise, chay-da-gahi, meant “tank”, and a dive-bomber, or gini, was a “chicken hawk” — a bird that dives on its prey. Sometimes the translation was more literal, as in besh-lo, or “iron fish,” which means submarine.