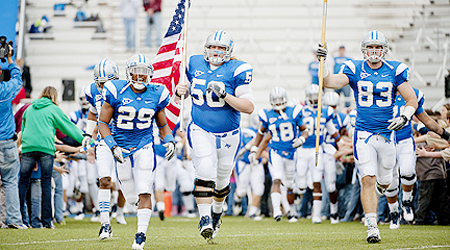 Carrying the Stars and Stripes, MTSU's Wiliam Pratcher (No. 29), Colin Boss (No. 50) and Jared Bamber (No. 83) lead the Blue Raiders onto Jones Field Nov. 19 to face Arkansas State for the MTSU "Salute to Armed Forces" celebration. Click the photo above to watch a slideshow of the day's events. (MTSU photo by Andy Heidt)

The Nov. 19 Salute to Armed Services/Veterans Day celebration at Middle Tennessee State University began with a fitting memorial service on the Veteran’s Plaza outside the Tom Jackson Building.

The midmorning event helped to launch the University’s 30th annual veterans event and honored MTSU students who have served their country and perished in the line of duty.

“It’s good to see so many of you here as we honor our veterans in this our centennial year at Middle Tennessee State University,” said Dr. Robb McDaniel, political science professor and chair of MTSU’s Veterans Memorial Committee.

“This memorial reminds us of the tradition of service to our country and our community that has always been at the core of MTSU’s mission.”

The memorial was dedicated in November 2007, and construction was completed in 2009. The MTSU Foundation’s Special Projects Committee, as well as alumni and community organizations, made the project possible.

The Rolling Thunder Honor Guard presented the colors as many in the audience stood at attention and saluted.

Andrea Lawrence, president of the board of directors of Tennessee Fisher House Foundation, whose father served with Gen. George Patton in World War II, told the audience about the Fisher House. Construction of a Fisher House facility should begin next spring on the grounds of the Alvin C. York Medical Center in Murfreesboro.

“Fisher House offers care and free lodging to families and patients of VA medical centers and military hospitals,” Lawrence explained, adding that the organization currently serves about 17,000 families across the nation.

“In summer of 1997, while I was stationed at Fort Campbell with the 101st Airborne Division, I was diagnosed with testicular cancer,” Maschhoff said. “I had to undergo several surgeries and four cycles of chemotherapy.

“I had to go to Wright-Patterson … [and] that’s when I found out about the Fisher House. I stayed there for 81 days while going through chemo. Let me tell you, they are still as close to me as my own family.”

A special crimson maple tree was planted and dedicated to Korean War veterans during the service. Dr. Jimmie Cain, an MTSU English professor whose father was serving in Korea when Cain was born, read a poem, “Memory of a Victory,” in honor of all Korean veterans.

“The Alumni Memorial Gym was built to honor veterans of World War II, and last year we honored the contributions of Vietnam veterans by planting a tulip poplar tree. We have always believed this memorial on the MTSU campus should be for all veterans,” McDaniel said.

The 22nd award honors the late Nunley, an MTSU author, historian, professor and former alumni-relations director who served in the U.S. Army in World War II, as well as men and women who have served with distinction in the U.S. military.

“This is a very sobering experience after hearing about all of the former recipients of this award,” said Henry, who represents Tennessee’s 21st district.

“Today I think about a very good friend, John Bragg,” Henry continued, referring to his fellow Tennessee legislator and WWII veteran, who also was a devoted MTSU alumnus. “He was a master of knowledge and a master raconteur. He could tell tales and jokes, and he was a serious man as well.

“So while I stand here in John Bragg’s back yard—the University that he loved and served—I want to take my time to tell all of Murfreesboro and MTSU to remember John Bragg.”

Brigadier General David Ogg (MTSU ’78, ’87) was inducted into the MTSU Military Science Hall of Fame award after being introduced by Tom Hoover (’77), vice president of the Blue Raider Alumni Association.

“This is truly an honor to be inducted into the Military Science Hall of Fame,” Ogg said. “The Oggs are four generations into MTSU. My grandmother was the first librarian here. I appreciate the alumni association for accepting my nomination. And for those who elected me, thank you.”

“The military saber goes to a cadet who contributed the most to the ROTC program and demonstrated the greatest leadership potential during the year,” Ogg explained.

To continue the MTSU Salute to Veterans celebration, an unmanned aerial vehicle flew out of the Floyd Stadium tunnel and delivered a special University Centennial coin for the traditional coin toss before the football game between MTSU and Arkansas State.

At halftime, veterans and active military walked across Jones Field and were recognized as the 360-member MTSU Band of Blue played the official song of each service branch.