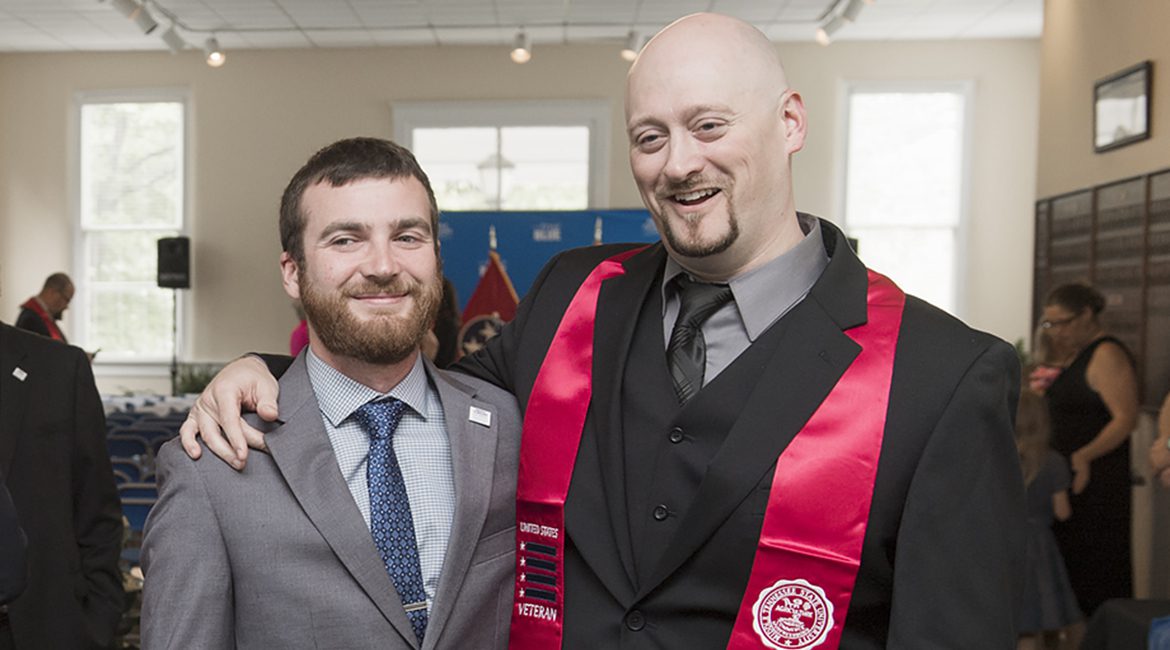 With an eye toward the NFL Draft or signing as a free agent for a potential pro career, former MTSU football standout and U.S. Marine Steven Rhodes remained focused on the present.

The university recognized nearly 50 of 122 student veterans during the event who are planning to graduate Friday, May 5, in College of Graduate Studies ceremonies, or Saturday, May 6, in dual undergraduate commencement ceremonies.

Since May 2015, MTSU has honored its graduating student veterans with a formal ceremony, presenting them with special red stoles.

“This is a blessing to me and my family,” Rhodes said of the occasion. “This is special to be able to show other veterans they can earn their degree.”

At MTSU, he was a 6-foot-3, 253-pound honorable mention All-Conference USA defensive end, voted the Armed Forces Merit Award winner by the Football Writers Association of America, and carried a 3.2 GPA student in the classroom. He majored in organizational communication in the College of Behavioral and Health Sciences.

Raising a family with a wife Adrienne and sons Kameron, 6, and Devon, 4, playing football, studying and the rest of life’s opportunities, Rhodes, a Nashville native, said it had been challenging.

“My wife has helped out and I have had a great support system with parents helping,” he said, relieved “my school work is finished and I can’t wait to graduate.”

Rhodes and MTSU President Sidney A. McPhee, a big admirer of the athlete, exchanged a huge hug during the ceremony when all student veterans came forward to be recognized. He said he had “a great workout” for the Tennessee Titans and “is looking forward to the call, whether it’s the draft or free agency. I’ll be somewhere in a month.”

McPhee told the student veterans he looks forward “to greeting you and personally thank you in a few weeks at graduation.”

Many-Bears Grinder, commissioner for the Tennessee Department of Veterans Services, attended the ceremony, as did other VA personnel, retired Brig. Gen. David Ogg (Class of 1978) and David Corlew with The Journey Home Project and longtime manager for country music legend Charlie Daniels, an avid supporter of the MTSU Veterans and Military Family Center that now bears his and his wife’s name.

For more on the assistance offered by the Charlie and Hazel Daniels Veterans and Military Family Center, call 615-904-8347 or visit http://mtsu.edu/military/index.php.

The Journey Home Project’s David Corlew, left visits with Adrienne and Steven Rhodes and their sons, Kameron, 6, and Devon, 4, before the April 19 Graduating Veterans Stole Ceremony in Cantrell Hall of the Tom H. Jackson Building.